San Basilio de Palenque, Colombia – A warm smile spreads across Juana’s face as she attempts to sell me a slice of Yucca cake, a sweetened pastry made with cassava, eggs and condensed milk. She and John Jairo, our tour guide, are talking to one another. Words roll off her tongue and her hands flail as I stare at the apron, in the colours of the Colombian flag, tied over her chequered gypsy skirt.

I listen closely to see if I can identify any of the words they use and match them to a language I am familiar with. It is a weird kind of guessing game I play with myself when I am in Lagos, Nigeria, but there I usually attempt to guess people’s ethnicities from the sounds and patterns of the languages they speak.

My attempts prove futile yet my ears tingle from her voice’s unsteady rhythm. I notice the absence of any double consonants or heavy sounds from certain Nigerian languages I would normally recognise.

Palenquero is a mix between African Bantu languages and European languages, John explains. It borrows from Spanish, English, French and Portuguese.

During the slave trade, the slaves spoke a kind of pidgin, which they used to communicate with other. This eventually became a Spanish-based Creole spoken by the people of San Basilio de Palenque; a settlement established by runaway slaves from Cartagena.

First I am Palenquero, then Colombian

Back at home in Nigeria, I have often experienced these parallels between speaking a native language and its associations with cultural ownership. That implication that the less of the language you speak, the less your authenticity to the culture and consequently the less claim you have to ownership.

For the Palenquero, language has been seen as a source of cultural resistance, identity and self-belonging, so I ask John if this makes him identify as Palenque or Colombian. “First I am Palenquero, then Colombian,” he says. He places his hand on his chest and speaks of his connection to Palenque with a sense of self-assurance.

Eighteen-year-old Yivani is hanging out in the courtyard of the San Basilio cultural centre with two friends. It’s difficult to miss him; his hair is stylishly cut into a mullet. I ask him: “Which comes first; Palenque or Colombia?” His response is similar to that of John. When I ask why, his giggles are followed by stuttering and a long pause. “Because I am proud to come from Palenque and it is known across the world, but being Colombian is just a nationality,” he says.

This tug between labels and identities isn’t particularly new. In Nigeria, I am usually Ibibio first and then Nigerian after and unlike Yivani, my own answers elicit even longer pauses, which I am yet to articulate.

At the gate outside the centre, a young girl walks up to me with her older sister. She accosts me with questions void of reserve. I can tell she is used to tourists.

We go through a game with her trying to guess my age, when she goes over I respond “menos” and when she goes under I respond “mas” until she reaches the correct number. She asks if I am married and when I retort with a headshake that signifies that I am not, she mischievously draws my attention to a delivery man on a Vespa and we burst into laughter.

Walking through the dirt roads and sleepiness of San Basilio, it is difficult to miss the underdevelopment amid the richness in culture and the boisterous schoolgirls. Brick houses are interspersed with a few made from mud and thatch.

Both the girls and Yivani speak to me in Spanish, reminding me of the threat facing the Palenquero language in this small community experiencing economic migration to neighbouring cities.

“When somebody from Palenque moved to Cartagena, they suffered racism and was made fun of a lot,” John explains. As a result, many families who migrated from the Palenque into the cities didn’t want their children to speak the language.

Growing up I hold vivid memories of being told that my language sounded like metal pots being dropped on the floor.

I often felt too embarrassed to even attempt speaking it, so always responded to my mother in English. When we spoke in pidgin, my father considered it vernacular, which would sometimes provoke its own punishment.

There are currently 33,000 active and passive speakers of Palenquero both at home and abroad and the steady decline in the number has been a cause of some anxiety for John. “There was a moment when extinction was a concern, it was my nightmare,” he says.

But unlike Ibibio, the language of the Ibibio people of southern Nigeria, efforts are being made to revitalise and disseminate Palenquero, which is now taught in universities in Cartagena.

With more than 300 languages in Nigeria, we were mandated to learn one of the three larger spoken ethnic languages at school.

When I ask Yivani about his thoughts on the possible extinction of his native tongue, with his shoulders slouched and head slightly bowed, he responds: “Well I am concerned because it is only the older people that speak it to perfection and in 10 years’ time, if they pass away a lot of it will be lost unless they start doing workshops to preserve it.”

The subject of integration and assimilation often comes up regarding language in a multicultural space.

John believes that integration has never been an issue here as they speak both Palenquero and Spanish and have always communicated and interacted with other cities.

After walking from one end of the town to the other, we settle at Juana’s restaurant for a lunch of fried fish, coconut rice, fried green plantains and stewed greens. My plate reminds me of home. 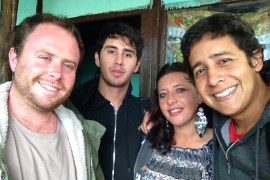 A former prostitute uses theatre to turn her life around and help others leave the streets and imagine a better future. 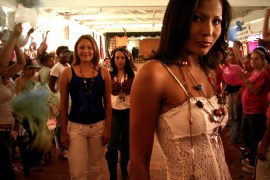 Can a beauty contest restore the dignity and hope of Colombian women put behind bars because of drugs and violence?