Bweyale, Uganda – Simon Peter Otoyo had just returned from school when the rebels of Joseph Kony’s Lord’s Resistance Army arrived in his village in northern Uganda . They tied his hands behind his back and marched him, along with three of his brothers, to a rebel camp deep in the bush.

As a child soldier for the LRA , 11-year-old Simon Peter was given a gun and sent out to fight the government army.

During a fierce battle in 1996, a bullet pierced his temple, shattering his skull and lodging behind his left eye, leaving him permanently blind.

After he was shot, Simon Peter spent the next 10 days in a coma. The rebels took him to various hospitals, but none would attempt to remove the bullet from behind his eye, so for the next nine years he endured intense pain as he moved with them from camp to camp in the borderlands between Uganda and Sudan, staying behind with the women and children when the men went off to fight.

Eventually, an ambush by the army offered him a way out. As missiles rained down on the jungle base where the rebels were located, Simon Peter made a run for it, sprinting blindly through the trees.

A bullet smashed through his shin bone, but he kept going until the noise of the fighting died down. For three days, he wandered through the wilderness using only his senses of hearing and touch before he was found and taken to a hospital.

A decade later, he has turned his life around and is now fighting to overturn attitudes towards the blind in Uganda.

“People see the blind as a burden,” said Otoyo, sitting on a blue plastic chair outside his hut in the town of Bweyale. “They look at us like we are dirty, and they think we can’t work properly. But I wanted to show the community that disabled people can also be productive,” he told Al Jazeera.

The 31-year-old now has a full-time job teaching knitting classes to students at the Amor Foundation Vocational Training Institute, enabling him to support his wife and 10-month-old son, and smashing stereotypes about the visually impaired.

“Before, I was not free. It’s so much better to work for myself and earn an income, instead of just receiving charity,” said Otoyo.

According to 2014 census results, of its 34.6 million population, 14 percent of Ugandans over five years of age are living with a disability, with higher figures in rural areas.

Despite more inclusive disability policies, a lack of data and statistics on those with disabilities makes the monitoring of and accountability for these policies very difficult.

As a result, insufficient attention and resources have been provided for disabled persons, further limiting the services offered to them and the investments made in changing societal perceptions of disability.

“Often, the community thinks that disabled people have been cursed,” she said, adding that as a result, many find themselves either neglected by their families or over-protected, denying them the opportunity to gain independence and learn how to navigate the world on their own.

Many never finish school, and in a country with high unemployment across the board, persons with a disability find it especially difficult to secure a job.

Sightsavers’ Connecting the Dots programme has trained more than three hundred young people with various kinds of disabilities in vocational skills such as carpentry, knitting and IT, before placing them in internships. It was through this project that Otoyo learned his trade.

Hassan Rajab is another graduate of the programme. The 29-year-old photographer, who has a physical disability, chairs the local Youth with Disability Association in Kiryandongo district.

“They used to call me ‘akalema’, which means a person who cannot do anything,” Rajab explained.

“My clients used to say, ‘How can this man take my photo?’ But when you have a job, the public realises you are not a person to ignore. And all those with disabled children see that their children could also succeed.”

‘No condition is permanent’

On a Monday in late November, Otoyo arrived at his workplace amid wild celebrations to mark graduation day. Dressed immaculately in a light grey three-piece suit and guided by the hand by his younger brother, he embraced his students and chatted with his fellow teachers.

“At first I did not think he would be able to teach us anything,” said Awello Younes, a 16-year-old student at the Institute who has spent a year in Simon Peter’s knitting class. “My family asked me if it was true that a blind man can teach, and my brother even came here to see for himself.”.

Now, Awello is making money by selling scarves and sweaters to local residents, to ward off the chilly nights in this part of northwestern Uganda, and plans to continue knitting full time as a career.

“I have worked hard to open the eyes of the community, to show them that the blind should be supported,” said Simon Peter. “We will change their minds, but we haven’t reached that point yet.”

Learning a skill, and then passing it on to others, has helped Otoyo overcome the trauma of a decade spent in the bush with one of the world’s most brutal rebel groups, nine of those years being spent in total darkness.

“They trained us to use guns and to abduct other children. They made us do things,” said Otoyo.

“But the teaching helps me to forget what happened. Friendship, a good home, living well, all these things help me to move forwards. No condition is permanent, and for the first time, I am free.” 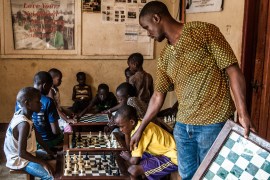 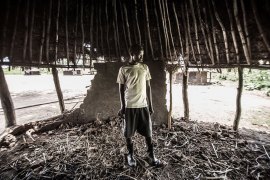 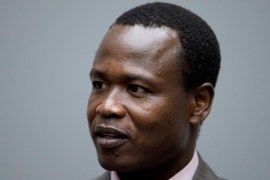 Dominic Ongwen faces charges of rape, murder, forced marriage and the use of child soldiers.