Italians are voting in a historic referendum over whether to change the country’s constitution and reform the 70-year-old republic.

Amid a hard-fought political battle that has polarised the country, Italians have been asked to decide whether they want a more streamlined political system that would, according to those in favour, improve governability, or stick to the document introduced by Italy’s founding fathers in 1948, which turned the country into a modern state, but now prevents structural reforms.

The promoters of the referendum, led by Prime Minister Matteo Renzi, say this is a one-time opportunity to radically reform Italy’s flawed institutions. Its opponents from across the political spectrum warn that it is a leap into the unknown, paving the way for more instability in the long term.

If people vote “yes”, there will be a change to Italy’s bicameral parliament of two chambers, the Chamber of Deputies and the senate. They currently have equal powers and are filled with directly elected lawmakers.

If the reform moves forward, the senate would lose much of its power. Instead of the current 315 senators, there will be 100, and rather than being directly elected, they will be selected by regional assemblies.

The central government would take back some of the prerogatives of the regions, like managing transport and infrastructure and regulating the supply of key energy resources.

Renzi, who has recently marked 1,000 days of his government in office – one of the longest-lived of the republic – has made this constitutional reform the flagship of his mandate. Evoking two decades of economic and political stagnation, he argues that this opportunity will not repeat itself.

“Italians won’t find another politician willing to take up this challenge … I want to change this country and not stay in these swamps,” he said in a series of public appeals urging people to vote for the reform.

Carlo Fusaro, a prominent constitutionalist, said that, if approved, government institutions will become more efficient, legislative procedures will be streamlined and the regions will be given better representation in parliament.

As a result, the country’s governability will improve, and future governments will be able to implement those economic reforms that are essential to restructure the country’s battered economy.

“Italy has stopped growing; its productivity is one of the lowest in Europe and the country is highly indebted. We badly need structural and quality reforms within reasonable timeframes,” he told Al Jazeera. “Italy is functioning on emergency mode with a weak government forced to act by decrees … Too many veto-players jeopardise policymaking at a time when the country needs both efficient institutions and governability.”

The reform would put an end to Italy’s unique anomaly of a “doubler senate”, a chamber that has the same functions as the Chamber of Deputies, and often vetoes or slows down the approval of key legislation.

Today tens of legislative proposals passed by the lower chamber wait to be approved by the Senate; some take more than two years.

‘Drifting off the democratic path’

However, opponents of the reform say that it would create contention between the two parliamentary chambers.

“This reform is confusing and doesn’t have a clear objective,” said Gianfranco Pasquino, a political scientist teaching at the University of Bologna. “It creates a senate of the regions whose members won’t be representing their territories, but rather their political parties; with two chambers contending with each other over the decision-making process. It will be chaos. This reform should be completely rewritten.”

According to Gianpaolo Carbonetto, a writer and intellectual, who has spearheaded a series of debates on the reform, it hides dangerous loopholes because after abolishing the currentSenate, it does not offer a counterweight to the power of the executive branch.

“The new constitution will turn Italy from a parliamentary into a presidential democracy … Italians need to understand if this corresponds to their idea of democracy,” he told Al Jazeera. “The real aim of the reform is to shift the balance of power from the legislative to the executive branch and from the local institutions to the centralist government.”

Carbonetto said that the constitutional reform, combined with the new electoral law introduced in May, the so-called Italicum, will give excessive powers to the ruling majority in the House of Deputies and, as a result, to the government.

Without an elected Senate to counterbalance the lower house, the majority party will have an extraordinary influence on the nomination of the constitutional bodies that guarantee Italy’s democratic system, like the president of the republic or the Supreme Judicial Council. “This will put the country at risk of drifting off the democratic path,” he said.

Supporters of the reform say such concerns are baseless.

“I can hardly see how a strong executive can be a problem in a country that had 63 governments in 70 years,” said Guido Crainz, a political scientist teaching history at Teramo University, who has published extensively on the subject.

“However, the constitutional reform doesn’t touch the executive branch, as opposed to past reforms proposed by Silvio Berlusconi or Massimo D’Alema, that tried to introduce a form of semi-presidentialism. These failed leaders today pretend they don’t remember it. The risk of an autocratic shift is a ridiculous invention that only serves their propaganda.”

The political parties opposing the new constitution include the Federalist party of the Northern League and the populist Five-Star Movement (M5S) of Beppe Grillo. Berlusconi’s Forza Italia supported the constitutional reform until the tycoon clashed with Renzi over the election of the president of the republic.

Renzi’s detractors within his own Democratic Party, former premier Massimo D’Alema and Pier Luigi Bersani, both of whom Renzi ousted from the party’s leadership, are among his fiercest critics.

This pluralist front has little in common. They don’t share an understanding of what the constitutional reform should look like. But, they do have a unifying desire to overthrow the sitting prime minister. As the campaign against the referendum has intensified, they have successfully managed to turn the vote on the reform into a ballot in favour or against the government – and not without the help of the prime minister himself.

Renzi has bet his political future on the result of the referendum, hinting that he may leave office if the reform does not pass. That move has backfired, as the opposition has rallied against the reform in the hope that he would resign in the aftermath of the referendum.

“Renzi has blackmailed the voters by saying he will resign if Italians fail to approve the reform. He has politicised the battle from the beginning,” said Pasquino. “The problem is Renzi is unable to talk to the opposition in a constructive way; he uses diktats, insults and slogans, which are dangerous.”

The prime minister’s often provocative language may not have helped the tone of a political debate that former President of the Republic Giorgio Napolitano defined as “abhorrent”.

“Renzi should be judged at the general elections … This reform won’t make miracles, but is a step ahead on the reforming path,” Napolitano said.

Napolitano is considered the spiritual father of Renzi’s constitutional reform. In 2013, amid a political deadlock, members of parliament pleaded with the former president to renew his mandate to safeguard the country’s institutions. Italy was still recovering from the financial crisis that led the country on the verge of default.

Napolitano reluctantly agreed to stay on, but asked the parliament to make the constitutional and electoral reforms necessary to improve Italy’s political system and relaunch its agonising economy.

“The present parliament knew, since its inception, that it had a mandate to do the reforms and that failure was not an option,” said Crainz. “There has been general agreement on the Senate’s redundancy for decades now. The failure of all previous attempts to reform the Constitution is the failure of Italian politics.”

After two governments had failed to achieve any tangible results, Renzi was appointed prime minister in 2014 with the support of a fragile parliamentary alliance.

“This is the best possible constitutional reform we were able to achieve after over two years of parliamentary work and thousands of amendments,” Renzi said on state TV. “Either we approve it and Italy moves on, or we keep the dysfunctional system we have now. With all the consequences it entails.”

A “no” vote may lead to early general elections with uncertain results. The right-wing is divided, Renzi’s Democratic Party is consumed by internal warfare and the anti-establishment 5-Star Movement‘s reputation has been dented by electoral scandals.

The consequences of political instability are far reaching and may entail more than just prolonged economic stagnation.

“Financial markets are watching closely this referendum. They fear Renzi’s resignation would open again a period of political uncertainty … this would exacerbate the current trends in equities and bonds which have been negative for Italian assets,” said Christophe Chemtob, a Swiss financial analyst and manager at Pomery Capital.

“More turmoil for the Italian banks may trigger a broader crisis of the Eurozone. This pressure comes at a bad time for the Euro, which is dropping against the US dollar since the US elections and may weaken further.”

The result of the referendum will feel highly symbolic as foreign investors wait to see whether Italy, the eurozone’s third-largest economy, is willing to restructure an institutional set-up that is believed to be the source of the country’s maladies.

Persistent slow growth is causing impoverishment and record unemployment. Today, 4.5 million Italians live in absolute poverty and some eight million struggle to make ends meet. The banking system is also increasingly unhealthy. Bad loans amount to nearly $400bn, one-fifth of all loans, making Italian banks reluctant to lend to small and medium enterprises, which are the very heart of the country’s economy (PDF).

The EU’s policy of austerity, which prohibits an increase in the budget deficit, has made things even worse, despite attempts by the Italian government to increase public spending.

Renzi promised sceptical Italians that he would invert this negative trend and change the same convoluted system that brought him to power. If he fails in this, his opponents say it will just be business as usual.

Barbara Bibbo is an Italian media professional who has worked extensively in Italy and the Middle East for both print and TV since 1998. For the past eight years, she has been a producer at Al Jazeera English. She specialises in international relations. 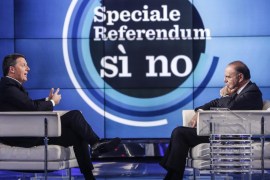 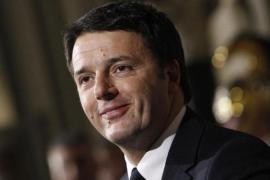 Italy’s new prime minister is not going to bring a radical change. 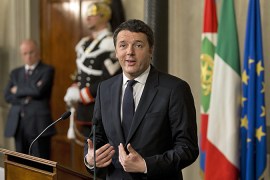 Will Matteo Renzi be Italy’s saviour?

The new prime minister promises an ambitious agenda, but he faces an uphill struggle.