Scholars and activists regularly criticise the vast amount of funds – $3.1bn– that the US funnels to Israel each year. Recently, United States President Barack Obama provided Israel with $38bn in military aid over 10 years, making it the single largest pledge of military assistance in US history.

With the President-elect, Donald Trump, certain to continue or even increase this amount, the criticism is likely to escalate.

In the past two decades, the US has been second only to the European Union in its donations to the West Bank and Gaza Strip, having committed more than $5bn out of a total of $30bn in aid.

These funds have mostly been allocated to the PA’s security sector. Half of Palestinian public sector civil servants are employed in security. Annually, the sector receives $1bn from the PA’s budget and around 30 percent of total international aid.

WATCH: Clinton v Trump: Where do they stand on Palestine?

Since 2005, the US, through its office of the United States Security Coordinator (USSC) for Israel and the Palestinian territories, has worked to professionalise and enhance the effectiveness of the PA security forces as part of its state-building (under occupation) project for Palestine. Yet the central tenet of this project has been the entrenchment of security collaboration between the PA and Israel.

That the PA and Israel work together on security means that a substantial amount of aid to the PA security sector is as much for Israel as it is for Palestine. Research shows that at least 78 percent of international aid to Palestinians ends up in Israel’s economy.

US aid makes it easier and cheaper for Israel to provide security for its settlements – illegal under international law and in the eyes of the world and the US. The presence of Israeli settlers on occupied Palestinian territory is also a violation of international law. The aid thus compromises the security of Palestinians by funding the interests of their occupier. “Collaboration” under occupation in reality means dominance of the oppressor.

to the PA security forces.”]

It is worth recalling the words of the former head of the USSC, General Keith Dayton, who praised the “new Palestinian men” he had created by training the PA security forces. Dayton hailed these new Palestinians’ ability to restrain mass uprisings, noting that they now turn their guns not against Israel but on “real enemies” – that is, those Palestinians who resist Israel’s occupation.

Security-focused aid to Palestine therefore transforms the PA into a sub-contractor to the Israeli occupation. Simply ask any Palestinian youth in the West Bank who sought to protest against Israel’s killing of hundreds of Palestinian civilians in Gaza in 2014 and was stopped by PA security forces.

A resident of the West Bank’s Jenin refugee camp told me: “I don’t have a problem with the security collaboration if it is reciprocal. However, there is domination only. When the PA can ask Israel to arrest a settler to protect the Palestinian people’s security, that will be a different story.”

A resident of Nablus’ Balata refugee camp added: “Security collaboration undermined our security and outsourced [the role of the occupation] to the PA security forces.”

Both the Balata and Jenin camps are regularly targeted by the US-trained PA force to “induce law and order” through security operations. The last round took place just last week with estimates of 2,000 security personnel entering Balata camp, resulting in fierce clashes.

Moreover, as my research shows, this “securitised” aid has made the PA more authoritarian, and, as some leading analysts have noted, has even set Palestine on a path toward a police state.

Both Amnesty International and Human Rights Watch have documented the PA security forces’ excessive use of force as well as assaults by police in the West Bank. The PA also limits freedom of speech as well as political participation and mobilisation.

Indeed, on July 25, two human rights organisations based in Europe filed an Article 15 submission with the Office of the Prosecutor at the International Criminal Court (ICC) to initiate an investigation concerning the crime of “widespread and systematic” torture of Palestinian detainees committed by PA security forces in the West Bank. The submission invites the ICC’s prosecutor to consider the issue for a possible investigation.

However, this use of force by the PA pales against that of Israel, the actor that has the real monopoly on aggression and violence in the Palestinian territories given that it is the military occupier and ultimate authority.

In effect, most US aid to Palestine has not only prevented Palestinian efforts to secure their freedom from Israel’s occupation, but has also promoted PA authoritarianism.

Aid to secure borders or foster internal security would be beneficial if Palestine were a sovereign state or if peace-building were actually taking place. But in the current conditions of conflict and oppression, policymakers must first find a way to a just resolution.

The US support of the PA through securitised aid also puts a heavy economic burden on Palestinians, as budgets and scarce resources are drained in favour of the security sector.

Money could be spent on infrastructure, education, and social services instead of, for example, keeping teachers’ pay at such low levels that they took to the streets in one of the largest mass protests in Palestine in recent years.

We also need to take a serious look at how this aid is allocated. A recent unpublished report by The Geneva Centre for the Democratic Control of Armed Forces (DCAF) that I was able to obtain, provides little-known statistics that quantify the aid-reliant PA security sector.

The DCAF report shows that there are 83,276 security sector personnel in the West Bank and Gaza Strip. By all international standards this is a very high number, with the ratio of security personnel to the population as high as 1 to 48. By comparison, in Afghanistan, another conflict country, the ratio is 406 policemen per
100,000 people, according to the data from Interpol, and 5.8 active soldiers per 1,000 people based on military balance statistics from the International Institute for Strategic Studies think-tank.

Using the same data sources, in the US, the ratio is 260 policemen per 100,000 people and 4.6 active soldiers per 1,000 people. Yet in Palestine a high ratio of security personnel to the population is
meaningless in terms of providing better security for Palestinians. The main source of Palestinian insecurity is the Israeli occupation, which is supported by the Palestinian security sector.

The main source of Palestinian insecurity is the Israeli occupation, which is supported by the Palestinian security sector.

Moreover, out of the 83,276 security sector personnel, 65,463 receive a salary from the PA and 17,813 are paid by the Hamas de facto government in Gaza, the report shows. The PA, mainly drawing on international aid, pays the salaries of 31,913 security employees in the West Bank and 33,550 personnel in the Gaza Strip.

As an additional twist to this story, it should be noted that the security personnel paid by the PA are actually banned from working for the Hamas government given the enmity between the PA-ruled West Bank and Hamas-ruled Gaza (although Israel remains the actual occupying power in both parts).

The PA is therefore paying more than $40m each month to keep its security employees in Gaza on a leave of absence. Absentees in the security sector have added some $4.8bn to the PA’s wage bill over the past 10 years. Neither PA officials nor Hamas leaders have addressed this issue; instead, they continue to maintain the political divide that has been so harmful to the Palestinian quest for freedom and equality for the past decade.

According to the DCAF report, the PA has 232 brigadier-generals and Hamas has 80. In comparison, the US Army has 410 brigadier-generals in total (133 in the Army, 110 in the Navy, 36 in the Marine Corps, and 131 in the Air Force). Surely, even in the best-case scenario of a security sector actually advancing Palestinian security, this skewed proportion of high-ranking and highly compensated officers makes no sense.

The report’s figures are valuable not only because they are rare, but also because they provide evidence for policymakers to assess critically the effectiveness of this flow of aid. The DCAF statistics should be considered in a rethink of policy regarding aid to Palestine if the US is serious about seeing peace in the region.

Such a rethink should not direct less aid to Palestine or abandon the PA security sector. This would increase the already high levels of unemployment in the West Bank and Gaza Strip.

The task should be to reconfigure the duties of the PA security forces so that they challenge the policy that favours the security of Israelis over that of Palestinians and are more accountable to the Palestinian people they are intended to serve.

Some may argue that redirecting aid in this way will lead to even greater violence between Palestinians and Israelis as well as among Palestinians themselves. It would not if it were underpinned by a real effort to secure a just peace, including an immediate end to the military occupation.

The truth is, military occupation and authoritarian rule can never bring security. A better allocation of aid alongside an investment in a just peace is the path to real and sustainable security.

Dr. Alaa Tartir is the programme director of Al-Shabaka: The Palestinian Policy Network, a post-doctoral fellow at The Geneva Centre for Security Policy (GCSP), and a visiting research fellow at the Centre on Conflict, Development, and Peacebuilding (CCDP),Geneva, Switzerland. 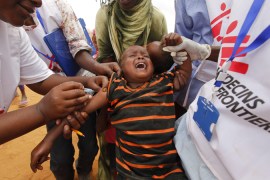 As a new report shows aid groups paid for access in Somalia, we ask if picking sides in a conflict helps their cause.