Santa Clara, Cuba – When Mariano Gil de Vena first came to Cuba to study the effects of the US blockade on the civilian population, he thought he would stay for ten days. Twenty-two years later, he is still here – and has turned his living room into a museum and cafe dedicated to the Cuban Revolution.

Gil de Vena, an artist from Spain, says while he is saddened by Fidel Castro’s death, more important than the man’s physical presence are his ideas. Just like Mahatma Gandhi, Jesus, and other great leaders, Fidel’s legacy will live on, Gil de Vena argues.

“Jesus lived 2,000 years ago, only for some 33 years, and he changed the whole world,” he says. “The important thing is the soul of the revolution.”

Unlike the Cuban revolutionaries, Gil de Vena does not label himself a communist, and is not an atheist. In fact, he has a strong Catholic faith – something he thinks aligns well with the Cuban system.

“Solidarity, looking after the poor and your neighbours. That is Cuba. If you call that Communist Party X Party or ABC Party, it doesn’t matter. It’s about the morality, about what the government is trying to do.”

While there is still widespread poverty in the country, Gil de Vena praises the Cuban system of free healthcare and free education. That the government has managed to achieve this despite international sanctions and without natural resources is nothing short of a miracle, he says.

“The world needs a new political system and for me, Fidel is the beginning of that,” Gil de Vena says in the cafe, where the walls are covered in pictures, medals and paintings. The mostly foreign visitors enjoy the typical Cuban fare of cocktails, coffee and sandwiches.

One of Gil de Vena’s favourite photographs is one in which Cuba’s current leader, Raul Castro, stands between Che Guevara and Fidel, looking up to his elder brother.

Other centrepieces of the museum are documents that Che and Fidel signed after the overthrow of General Fulgencio Batista, thanking the people of Santa Clara for their support in the battle.

The city now houses the Che Guevara mausoleum, and his iconic face can be seen on building walls as well as in sandwich shops and pharmacies. Following Fidel’s death, Cuban flags and those of his July 26 movement, along with signs saying “Gracias Fidel”, are dotted across the city.

Born under Franco’s military dictatorship in Spain, Gil de Vena describes himself as a “lucky man”, having experienced different political systems. When he was an adolescent, Spain adopted a system of monarchy and democracy – which Gil de Vena describes as an “impossible marriage”. And now, he lives in what he calls the last working socialist country.

He has no plans to return to Europe, unless the ongoing change turns Cuba into just another capitalist country.

Fidel passed away on Friday at the age of 90, after years of declining health.

Eliel Santos Mendoza, who works behind the bar in Gil de Vena’s cafe, says that while his death was something Cubans had been prepared for for a long time, it still came as a shock.

“He was not just a president. He was much more, an inspiration for millions of people,” the 24-year-old says. “He was like a father of our country.” 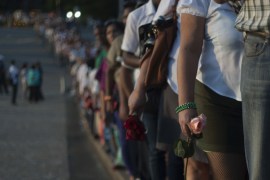 Farewell to Fidel Castro: ‘It is hard, so hard’

Cubans queue for hours to pay tribute to the man they knew as “El Commandante”. 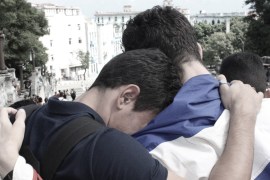