New Orleans, Louisiana – In the run-up to the November 8 elections in the US, Miranda Evans has already noticed an increase in gun sales in her shop in Mississippi. Some customers are worried Hillary Clinton will be the 45th US president.

During her campaign, the Democratic candidate has said it is necessary to further regulate gun sales to lower the amount of deaths related to firearms. Her husband, former president Bill Clinton, signed an anti-gun law in 1994, banning assault rifles for a period of 10 years – a ban Hillary Clinton has vowed to reinstate.

Evans has seen gun sales growing before. After the Sandy Hook massacre, when a 20-year-old man killed 20 children and six staff members at an elementary school in Newtown, Connecticut, using an AR-15 type of semi-automatic rifle was one such instance.

The same day, President Barack Obama gave a speech stating action had to be taken, regardless of politics. That month, the amount of background checks performed by the FBI for gun sales peaked at 2.7 million, compared with 1.5 million the same month the year before. When someone buys a gun, the seller is obliged to perform a background check with the FBI to make sure the buyer has no criminal record. These serve as a reliable indicator of the trends in gun sales, although they do not translate directly into gun sales.

In the following days, Evans completely sold out of AR-15s. She could not even order them any more from a manufacturer. As people feared a ban on these assault rifles, similar to the 10-year ban Bill Clinton signed, people came to the shop to try to buy them before they would disappear from the shelves.

If Hillary Clinton were to win, for Evans, a ban on assault rifles just does not make sense. Like many pro-gun Americans, she already thinks the name “assault rifle” should not be applied to these kind of rifles, because it gives them a bad name.

“We don’t even take an AR-15 for deer hunting, for it will only hurt the animal instead of killing it,” she says. “My daughter shot one when she was eight years old. It’s fun to shoot; it’s just a sporting rifle. It’s not the big bad weapon they say it is.”

But Evans says “panic buying” on the scale she has seen in anticipation of political changes before has not happened this year.

“You see, we don’t believe Hillary Clinton will win, so no one is really panicking.”

OPINION: Gun control in the US is not a fantasy

Driven by fear of new amendments

Over this past annual quarter, from July to September 2016, the FBI recorded the most background checks for this quarterly period since it started to keep track of these checks in 1999. Both Smith & Wesson and Sturm Ruger, two major US firearms manufacturers, reported unprecedented sales for this period.

In a gun store in Alabama, co-owner Tracy Schmitt, who is originally from New York state, says people worry about an “oppressive government”. Gun ownership is the only way to keep the power in the hands of the people, he says.

With Hillary Clinton succeeding a Democratic president in office, Schmitt believes there is a possibility gun control laws will be implemented quickly.

“Barack Obama and Hillary Clinton work together,” Schmitt says, referring to the current president’s endorsement of Clinton. “So even considering she would only be inaugurated in January, it is possible Obama would pass an executive order, which makes it impossible for people to buy arms before Clinton gets to the White House.”

The Second Amendment to the United States Constitution states: “… the right of the people to keep and bear Arms, shall not be infringed”.

Fear of laws to regulate this Amendment, say sales people, has led to people stocking up on equipment. When he was back in New York state, Schmitt experienced the increases in sales from previous administrative actions. Now, Schmitt says, many of his customers have been stocking up on ammunition in the past few weeks and coming by to get old guns fixed and oiled.

“Barack Obama has been a great firearms salesman,” he laughs, referring to the peaks in sales of 2012 – the year of the Sandy Hook shooing and Obama’s re-election. “But Bill Clinton was the number-one salesman before.”

Schmitt and his co-owner, Darrell Qualls, say the vagueness of future gun regulations is what worries people. Hillary Clinton says she supports reasonable gun control and pledges to get military-style weapons off the streets. But according to Qualls, it is unclear which firearms would be considered military weapons once new regulations come into place.

Qualls shows an old rifle that was used by the Spanish during the civil war in the 1930s; then he shows a sniper rifle. “Most firearms were originally designed for the military,” he says. “Which one of these two will be prohibited?”

Not everybody in the United States believes the AR-15 rifles are as light a weapon as Evans portrays them to be.

Such a rifle can be easily modified to hold up to 100 bullets, which can be shot as quickly as the shooter can pull the trigger.

The same accounts for similar rifles, such as the Sig Sauer MCX, which was used in the recent shooting at a nightclub in Orlando, Florida – in an audio recording of this shooting 24 shots are heard in nine seconds.

During her campaign, Hillary Clinton has repeatedly mentioned 33,000 as the average number of gun-related deaths per year in the United States. This number can be seen as misleading, though, as it includes suicides, which account for more or less two thirds of the deaths.

At a recent gun show in Robertsdale, Alabama, two men in their 60s walked around with rifles slung over their shoulders. These men, called John and Sam, came to find potential buyers for their rifles. Walking past tables full of handguns, semi-automatic and army-paraphernalia, they talked to prospective customers.

Someone offered $250 for the .22 calibre Magnum rifle Sam carried. He was hoping to find a better offer, so they exchanged phone numbers and agreed to call later that day in case he did not find this.

Official weapon dealers are obliged to perform an online background check of their clients with the FBI, which is done on the spot.

However, private persons can sell guns without performing such checks, as long as they are not aware of the buyer having a criminal history. Bill Clinton called this the “gun show loophole”, which he as well as the two following presidents, George W Bush and Obama, tried to close, and Hillary Clinton has pledged to close.

Linda Clifton, who runs a gun shop in rural Alabama with her husband, a retired military officer, believes carrying a gun has become necessary with crime rates going up in the countryside. They organise classes for costumers to learn how to use guns for self-defence.

She proudly explains how one of her costumers, a young mother, managed to chase away three young men who were following her in a parking lot of a local Walmart supermarket.

“I’m sure Clinton will try to do something. But the more she runs off with her mouth, the more people are gonna purchase guns,” Clifton says. “But mostly what she says is just election talk; trying to win votes. Besides, before we would ever give up our guns, we would have a civil war in this country. They would not want that.”

It is a recurring remark in gun shops and by gun owners as well as sellers at gun shows in Alabama and Mississippi: whoever touches the Second Amendment risks gearing the country towards civil unrest.

Sam and John at the gun show have stocked up on ammunition, to be prepared if this would end up in civil war, they say.

During the same gun show, a man selling bulletproof vests, who does not want to be named, says many Americans are fed up with the way the country evolves.  “If Hillary Clinton gets elected, I advise foreigners not to come to this country,” he warns. “All hell will break lose.”

Banning a certain type of firearm is one thing, but would the local law enforcement strictly enforce new laws?

Officer Don Hopkins is an investigator and police spokesman in the little town of Waynesboro, Mississippi. Though he does not believe the Second Amendment would ever be changed, he would not want be the one to go to people’s houses and take assault rifles from them if gun ownership were to be banned in the US.

“It’s simply not gonna happen,” he says in his office at the police station.

“If you disarm honest people, all you gonna have is armed dishonest people. If you ask around, over 90 percent of law enforcement will rather see their citizens armed.” 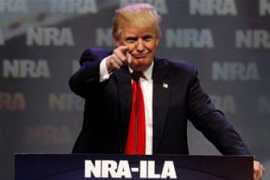 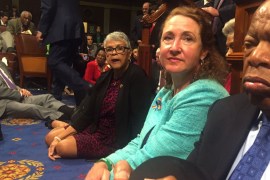 Democrats say they will go back to their home districts to try to build support for legislation after a day of protest.