Glasgow, Scotland – He arrived like a political hurricane, but in the end, left a legacy of controversy that, in the eyes of many in his native Britain, has today reduced him to the status of pariah.

Tony Blair’s landslide victory as UK Labour leader in the 1997 general election saw the Scots-born Oxford graduate become, at just 43, the youngest person to secure the British premiership since Lord Liverpool in 1812. It would lead to 10 years at the helm of the UK government as Blair’s rebranded New Labour party enjoyed three consecutive general election victories.

But when Sir John Chilcot, author of the long-awaited and explosive report into Britain’s role in the Iraq war, told the House of Commons liaison committee earlier this year that Blair had caused long-term damage to the British people’s trust in politics by taking the country to war in the Arab state, it reinforced the uncompromising views of his many detractors.

A plunge in fortune

Harsher descriptions, including those of “war criminal”, have followed this former political titan ever since he left office in 2007, and were brutally reignited in July with the publication of Sir John Chilcot’s Report.

This, Blair’s critics say, mauled his reputation, but Blair said it cleared him of long-standing claims that he had lied to the British public.

As Blair’s reputation stands today – several UK MPs are this week reportedly seeking a new investigation into Blair’s role in the Iraq war – his plunge in fortune remains unprecedented for a former British prime minister in modern times.

“The simple place to start is Iraq, of course, as that was a major turning point,” English political writer Francis Beckett, co-author of Blair Inc: The Man Behind the Mask, told Al Jazeera.

“It’s not just that every year that passes since the Iraq invasion we see more evil results from it, but also it was the way it was done … The fact that he acquiesced in an invasion without any consideration for the future governance of the country began his descent to the point where his resignation as prime minister in 2007 became inevitable because it was very clear that he could not win another general election.”

Shortly after Blair left office, he began work as a Middle East peace envoy with his appointment as special representative of the  Quartet of world powers striving for a resolution to the ongoing conflict between Israel and the Palestinians.

Indeed, his post-prime ministerial business dealings, which have included advising Arab governments and consultancy work for the US investment bank JP Morgan, have reportedly netted him millions of pounds. It has also left him exposed to accusations of greed from many hardened critics, including those from within the party he led from 1994 to 2007.

“There’s a more general sense that he let himself, and therefore the country, down by what some see as his obsession with making money on the international speaking and consultancy circuit after he left No 10 [the prime minister’s residence],” Tim Bale, professor of politics at Queen Mary University of London, told Al Jazeera.

“In essence, the higher you fly, the further you have to fall. He flew higher than most politicians, so his crashing and burning has been all the more spectacular.”

A charismatic and talented politician

Many have lamented the demonisation of Blair over his role in the Iraq war and its propensity to greatly overshadow his domestic policies, which, his advocates say, changed the face of modern Britain.

Columnist Zoe Williams, writing in a British newspaper on April 8, 2014, opined that “Blair left a blueprint for social democratic government … But we can’t even see it because it has been obliterated by the bloodshed of the Iraq war.”

In his first term in power, Blair negotiated the 1998 Good Friday Agreement. This brought an end to the 30-year sectarian conflict in Northern Ireland – also known as “The Troubles” – and, ratified by a popular referendum across both sides of the Irish border, gave birth to a power-sharing assembly based in the Northern Irish capital, Belfast.

During this period, he also brought devolution to Wales and Scotland, again both endorsed by popular votes, and, in the latter’s case, by a hefty margin.

Blair’s decision to introduce the national minimum wage and his fight against child poverty are also flagged by Blair supporters, as is his role in Kosovo and Sierra Leone where he won genuine plaudits for his “humanitarian interventionism”.

He was also, by common consent, a uniquely charismatic and talented politician who even managed to win a majority general election victory in 2005 – two years after his controversial decision to send British troops into Iraq.

“I think he was probably the best communicator in British politics,” said Simon Pia, a one-time media adviser to two Scottish Labour Party leaders at the Scottish parliament, speaking to Al Jazeera. “He had a great knack of appealing to different parts of the electorate – and what was unusual and unique for a Labour leader was that he connected with middle England and appealed to Conservative voters.”

OPINION: The story of Bush and Blair’s great lie

In October, Blair, who left his Quartet role in 2015, told Esquire magazine that his return to British politics was an “open question”.

And he told the New Statesman magazine in November of his wish to support the “politically homeless” dismayed with both the opposition Labour Party and UK prime minister Theresa May’s Brexit-backing government.

This led many on social media to utter phrases like “Tony Blair is a shadow that grows in the dark” and the Twitter account of the irreverent British political TV quiz Have I Got News For You to tweet: “Tony Blair says his return to British politics is an ‘open question’, that question being ‘How much does it pay?'”

Blair – a battle-hardened statesman who has spent some years fending off accusations involving Iraq and his post-political business affairs – has probably become used to his current role as public enemy No 1 in the eyes of his most ardent critics.

So, does the passing of time hold any hope for a more objective analysis of Blair – both as a politician and a man?

“A more balanced assessment would suggest that a premier who made profound changes to the UK’s constitution and governance,” said Bale, “whose government presided over an unprecedentedly long period of economic growth, and also effectively rescued health and education from chronic decay and mounted a convincing attack on child poverty and a huge expansion of the university sector, couldn’t be all bad.”

But the academic, who said that other than the fallout from Iraq, many Britons also hold him and his government responsible “for supposedly ‘opening the floodgates’ on immigration”, also added: “Whether that objective assessment will ever trump people’s wholly understandable emotions is a moot point – and some would say that Blair doesn’t help himself by refusing, as it were, to ‘go quietly’ and allow time to heal the wounds.” 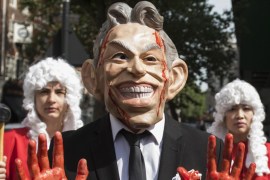 Chilcot: The verdict from the UK’s media

The long-awaited inquiry into Iraq war was more damning than anticipated, while Tony Blair insists he did right thing. 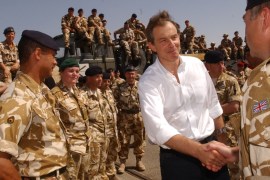 Chilcot report: Tony Blair in focus ahead of launch