Gal’ad, Somalia – “Line up in a straight line. We will do the talking on your behalf,” an elderly man with a henna-dyed beard tells the group of young men. They are standing in front of an iron-gated compound in the centre of the town of Gal’ad in Somalia’s central region of Galguduud, holding AK-47 rifles.

Until a few days ago, the young men, who are all from the town, were government soldiers fighting against al-Shabab, the al-Qaeda-linked group trying to overthrow Somalia’s internationally recognised government. The men are now calling time on frontline service; hoping to put down their guns and return to civilian life in their hometown. But Gal’ad is now firmly in the grip of the rebel group.

Somali troops, backed by Ethiopian forces, had been in control of Gal’ad, but pulled out in July. Ethiopian troops vacated the town first; the poorly equipped Somali soldiers followed shortly after.

Al-Shabab fighters stationed just outside the town soon came in and took control. Anyone who worked with the Ethiopian and Somali troops was now at the mercy of the group. Al-Shabab often publicly beheads government troops it captures, and anyone else working with the government can expect a similar fate.

For the young men, the group of elders is all that stands between them and death by beheading.

Sixty-six-year-old Daud Ali Gaafow is a lead negotiator between al-Shabab leaders and those who have been fighting the group but now want to return to civilian life in areas under its control. He has been doing this for more than seven years.

“There has been a crisis in our country. Lots of bloodshed; neighbours and brothers fighting against each other. Unnecessary violence. And as elders, it is our responsibility to do our part and help our people,” Gaafow explains after witnessing another truce between al-Shabab and former government troops.

“In this town alone, we have facilitated the safe return of hundreds of people, both men and women,” he adds.

As Ethiopian troops continue to withdraw from towns and villages in south and central Somalia, the elders have never been busier.

Addis Ababa has withdrawn its troops from at least 10 towns since the start of this year, and four towns in this month alone. Al-Shabab has taken over all of those towns and villages.

Those who have worked with the Ethiopian forces are left with two choices: to seek refuge in areas not under the armed group’s control or to reach out to the elders to broker a truce.

The elders say they have worked on the safe return of more than 500 young Somali men this year alone. Since the Ethiopian troops withdrew from Gal’ad district, 200 young men have put down their weapons, according to the elders and the town’s al-Shabab administration.

To Gaafow’s right, sitting crossed-legged with speckles of grey in his beard, is Abdullahi Ibrahim, another town elder who has been inundated with requests to broker a deal with the town’s al-Shabab leaders.

“All we are doing is to serve our people. We first speak to the young men before we approach al-Shabab leaders,” he explains.

Convincing the young men that they will not be harmed by their former enemy is a hard task, he says.

“They want assurances that they won’t be harmed. They also want guarantees that their belongings will not be confiscated by al-Shabab. We give them assurance that that will not happen to them.”

But it is not only the former soldiers that need assurances before any deal is struck.

Convincing al-Shabab to allow the men, men whom al-Shabab fought for control of areas that they have just retaken after many years, is not an easy or straightforward task.

The group has lost several senior leaders to US air strikes that it says were facilitated by spies in the area it controls.

Anyone that has worked with the government, the Ethiopian forces or the African Union troops in Somalia is a suspect until proven otherwise.

“We guarantee they will not go back and fight al-Shabab again. We also give al-Shabab assurance that these young men are not spies, that they are now civilians,” Ibrahim says.

Meanwhile, sitting in front of the two groups – the elders and the former government soldiers – is al-Shabab’s highest ranking leader in the region: Hassan Yakub, a plump-faced man with a towering figure that fills his camouflage uniform.

“These young men are from this region. They were living here peacefully before the Ethiopian colonisers captured the area. They were then deceived into working for them,” Yakub says, as the former soldiers place their weapons on a table beside him.

“When they witnessed the truth, they contacted their clan elders and asked for forgiveness, and to be let back into the society,” Yakub tells Al Jazeera.

This is an unprecedented step from al-Shabab, but the group is working hard to win the hearts and minds of the local population.

“They have admitted they were in the wrong and have asked [God] for forgiveness,” Yakub, clutching a brand new AK-47 on his lap, says. “We forgive them and trust them as fellow Muslims.”

As the truce is agreed, the former soldiers breathe a sigh of relief. For the first time in many weeks, they can now walk freely in their hometown. Ahmed Mohamed, a former casual labourer before he became a government soldier, says he is looking forward to starting his life again.

“When the government and Ethiopian troops came to the town, they started recruiting the young men to join them. We were promised good money. So, I joined them,” Mohamed says.

“If you did not join them, you would be accused of being al-Shabab, or being a sympathiser. We were never paid even for one single month. When the Ethiopians left, we followed them because we thought al-Shabab would kill us,” he adds.

“I then heard of the elders and what they were doing and I spoke to them. They assured me I won’t be harmed, and that’s how I came back,” Mohamed says with a smile.

Hussein Ali, a former camel herder, sits attentively waiting for his turn to speak and ask for forgiveness.

When government and Ethiopian troops took over the town, he was employed as a local council leader.

“When they left, it was everyone on their own. Every one of us had to find a way to survive, and because we heard al-Shabab would kill us if they found us in town, we escaped,” Hussein explains. “Now, we returned after the elders promised us we won’t be killed.”

The call for the afternoon prayer blares from the speakers on the town’s mosques, signalling the end of the meeting and the start of the young men’s freedom.

Ethiopia says it will likely vacate more towns in southern Somalia, so as the elders walk away, they know they will have more busy days ahead.

“It is better to negotiate and sort our differences without Somali blood spilling,” Gaafow, the oldest of the elders, says. “We will continue doing this job if it means saving the life of our young men.” 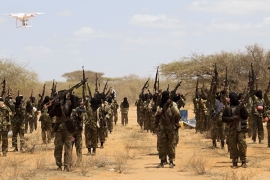 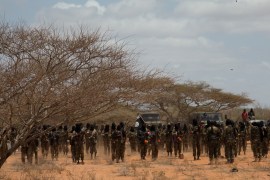 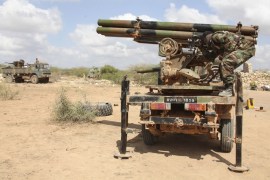 Suicide bombing of “Djiboutian military base” in central Beledweyne region is latest in a campaign of deadly attacks.