Sulaimania, Iraq – “We have lost our lands and we’re probably never going to get them back. But we have to fight to save what is left of our culture. If we lose that, we have lost everything.”

So I was told by legendary Iranian-Kurdish folk singer Mazhar Khaleghi who now runs the Kurdish Heritage Institute in the northern Iraqi city of Sulaimania.

While a war rages against the Islamic State of Iraq and the Levant (ISIL) across the country, the Kurdish intelligentsia fear there is far more at stake than the loss of land.

Kurds across the Middle East have been fighting existential battles for centuries – today it’s ISIL (also known as ISIS), but yesterday it was Saddam Hussein’s Baathist army, the Ottomans, the Persians and, of course, the British, who they blame for cheating them out of a homeland at the end of World War I.

Today, some 150,000 Kurdish Peshmerga form a crucial part of the ground forces in the campaign against ISIL in Iraq, most recently in Mosul.

However, for people such as Khaleghi and other cultural figures, far more critical now is the battle they are fighting on the sidelines to preserve Kurdish heritage and culture. Lose this and the nation is broken forever, they argue.

In the city of Sulaimania, which marked its 232nd anniversary on November 14, residents have long prided themselves as champions of Kurdish culture. Founded in 1784 by an ambitious Kurdish prince to reflect the values of liberalism and cosmopolitanism, Sulaimania’s residents have been at the forefront of the campaign to promote the use of the Kurdish language since the late 19th century. Before then, the language of the learned man was Persian, Arabic or Ottoman Turkish.

There are fewer residents today who know anything about what the city of Sulaimania once stood for - and the preservation of heritage sites is the last thing on their minds.

Today, the very identity of this city is in danger as war and economic hardships result in changes in priority – and demographics.

The influx of Kurds fleeing persecution from surrounding villages over the decades, and now the unceasing waves of internally displaced people from war-torn Iraqi provinces means there are fewer residents today who know anything about what the city of Sulaimania once stood for – and the preservation of heritage sites is the last thing on their minds.

Nor is there any serious interest shown by journalists who parachute into Kurdish cities every couple of months when there is an outbreak of any battle billed as “decisive”.

“Are you really going to write a report about our museum or are you just here for a glass of tea?” asked the attendant at the Sofy Karim House. “Many journalists have come here before – they asked many questions but nothing came of it.”

The home of Sofy Karim, a wealthy tobacco trader, was built in 1887 and sold to the Sulaimania municipality in 1996 by Karim’s son, on condition that it be restored and turned into a museum to preserve and showcase the traditional Kurdish way of life.

Sulaimania’s artists, historians and those who want to preserve its architecture, are pressuring the municipal authorities as well as the Kurdistan Regional Government to allocate more funds for similar projects – but to no avail.

War is an expensive thing, and a festering dispute with Baghdad over illicit oil sales has meant that the Kurdish region’s 16 percent share of the Iraqi national budget has not regularly been paid out. Coupled with the fall in oil prices, the Kurdish region’s economy has taken a hard hit.

Set up shortly after the 2003 US-led war in Iraq, the Kurdish Heritage Institute and the Zheen Archive are among the bodies spearheading the effort to safeguard Kurdish culture and identity – and they have had to turn to private donors for help.

The region’s stagnating economy has resulted in drastic budget cuts. Those have meant lay-offs, and fewer staff means a lower production capacity – that means, for instance, slowing down the process of remastering old and damaged vinyl records of long dead Kurdish folk singers from across “greater Kurdistan”.

At the Zheen Archive, brothers Rafiq and Sadiq Saleh have committed themselves to the collection and preservation of ancient Kurdish manuscripts that serve as testament to the contribution of Kurdish intellectuals in the greater Middle East. These include newspaper clippings about Kurds or poetry written by Kurds, or foreign-language books on Kurds penned by foreigners.

The Archive’s bookshelves are lined with items that would make any Arabist salivate. For instance, an original copy of “Dar-ul-Islam”, a travel-memoir by Mark Sykes, of Sykes-Picot fame, dated 1908; or another one titled “To Mesopotamia and Kurdistan in Disguise” by Major Ely Banister Soane. Soane served as political officer of Great Britain in northern Iraq from 1919 to 1921, and is sometimes referred to as the “Lawrence of Arabia of Kurdistan”.

They also have newspaper clippings relating to Gertrude Bell, a woman respected by many Iraqi Arabs, but vilified by Kurds who hold her partly responsible for giving the Kurds a rotten deal when carving up the modern state of Iraq in 1920.

“We have items in this library that money cannot buy. If anything were to happen, and these books were gone, that means Kurdish history is gone,” says Sadiq Saleh.

And yet money is exactly what these institutions need right now to keep their battle for Kurdish culture going. Right now, the tide is not in their favour. 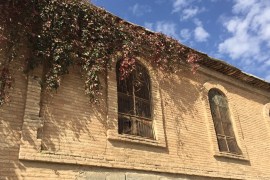 Sulaimania: Saving the dream city of a Kurdish prince

Efforts are under way to salvage what remains of old Sulaimania, once a bastion of diversity and cosmopolitanism. 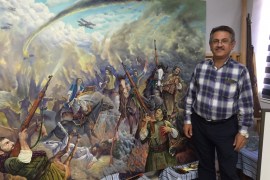