On Monday, the full Moon will be the biggest and brightest since 1948 as it reaches its closest point to Earth to form what is known as a supermoon.

The rare proximity of “spectacular supermoon” to Earth means it will appear 30 percent brighter and 14 percent bigger as it reaches just 356,509km from Earth, according to NASA.

It will become its fullest at the same time as it makes its closest pass to Earth, causing it to appear unusually large, according to astronomers.

Since the Moon’s orbit around Earth is elliptical, its distance to the planet varies between lunar cycles.

The unusually big and bright Moon will appear at its most impressive just as night falls over Asia, but astronomy enthusiasts will be able to see Earth’s satellite loom large anywhere in the world shortly after sunset, weather permitting.

From India to Australia, skygazers and photographers were seeking the best viewing spots in the region where the phenomenon will be visible first, hoping that cloudy skies and the perennial pollution that blights many Asian cities will not spoil the fun.

Thousands of people were expected to head to Sydney’s Bronte Beach to witness the event after author Gavin McCormack created a Facebook page to let friends know of his plans.

“Bring a flask of tea … bring a picnic, bring the kids and bring your binoculars because this is going to be fantastic,” he wrote.

Delhi residents were hoping toxic smog shrouding the world’s most polluted capital in recent weeks would abate to allow spectacular views as the supersized  Moon rises over the Red Fort, the former Mughal emperor’s residence.

Picnics were being organised in downtown Hong Kong for residents to watch the supermoon rise over the financial hub’s famous skyline, while hikers were heading to the greener, more distant corners of the Chinese city to enjoy views with less light pollution.

The landmark Taipei 101 skyscraper in Taiwan, one of the world’s tallest buildings, was set to welcome skygazers, with astronomers predicting it would be one of the biggest Moons seen from the island in nearly 100 years.

The supermoon will also mean a stronger high tide, something that gets surfers giddy with excitement, not only at the prospect of riding bigger waves, but doing so at night.

Tides were predicted to be higher than usual on the popular Indonesian holiday island of Bali, a favourite with surfers.

In Thailand, astrologers were variously predicting the supermoon would bring disaster or great fortune.

Soraja Nuan-yoo, renowned for predicting the 2004 tsunami that killed many in Thailand and other countries round the Indian Ocean, warned that when the Moon gets close to the Earth, “natural disasters happen”.

Astronomers say it can be hard to notice that the Moon appears brighter than usual. Once it is high in the sky, it would be hard to tell the Moon is larger but on the horizon, it could appear quite spectacular.

The last time a full Moon was this close to Earth was in 1948, while in 1912 it was even larger, coming 134 kilometres closer to Earth. 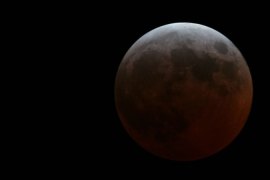 The first of four lunar eclipses is seen in the night sky. 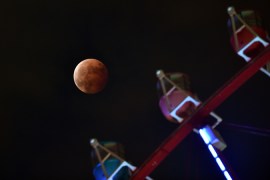 A total lunar eclipse has been visible across much of the Americas and Asia, resulting in red-tinted moon.