Taiz, Yemen – Fifth-grader Amr Khalil, 12, sits on the floor with about 30 other students. He stares at his teachers, his mind too busy to think about the pain in his back from sitting on the uncomfortable floor.

Khalil is one of the thousands of students in the city of Taiz who now study inside private homes after their schools were damaged by fighting, transformed into shelters for families displaced by the war raging in Yemen, or used by Popular Resistance militias fighting against the Houthi rebel group.

He is a student at the Nema Rasam School where more than 2,000 students were forced out by the Popular Resistance, which uses the school as a centre. Now, Nema Rasam’s students go to school in places that do not have the necessary equipment – not even chairs.

Due to violence and the closure of schools, more than 350,000 children were unable to resume their education in the past school year, bringing the total of out-of-school children in Yemen to over two million, according to UNICEF. The Nema Rasam school is one of 2,108 schools across Yemen that UNICEF believes can no longer be used as a result of the conflict.

After a month of study, some students started to suffer from pain either in their spines or legs, and this is because of sitting on the ground.

Khalil did not study last year because he did not find a safe school to study at, but this year, he insisted on attending school anyway.

“I want to study. I do not prefer to stay at home, but I do not think I can continue as I am suffering from pain in my back and legs,” he told Al Jazeera.

Naseem Salah, a teacher at Nema Rasam School, said the house where the school is now located is in a safe part of the city. But the rooms are small, and the building lacks a yard for the children to play in.

“After a month of study, some students started to suffer from pain either in their spines or legs, and this is because of sitting on the ground, so I think chairs are a very important thing for students,” she said. “The students cannot find a good chance to learn in those houses as their thoughts are scattered, and they cannot even walk easily on the stairs.”

There are more than 600 students in this house in total – the girls study in the morning and the children in the afternoon. It is difficult because this house was not designed to function as a school.

But Ahmed al-Qadasi, the school’s principal, said there were no other options, and they did not want to stop the children’s studies. “We held a meeting with students’ fathers, and they agreed about using those buildings, and they pay the rent of those houses, as the government did not help us,” Qadasi told Al Jazeera. “We bought some tools such as whiteboards at the fathers’ expense, but we still need a lot of tools, including chairs and textbooks. “

Ahmed al-Bohairi, the head of the Educational Media and Studies Center in Taiz, told Al Jazeera that although Taiz city contains 206 public schools, only 37 were able to open this year due to the war. Private schools also exist in Taiz, but most families cannot afford them, especially given the economic crisis in the country.

Many students in Taiz did not enrol in school last year, as only 12 schools were working in the city in 2015, and about 468 were closed in the whole province. “The schools, which were partially damaged by the war [both in Taiz and rural areas], have reopened for study this year,” Bohairi said.

According to a statement by UNICEF, on a normal day, the number of out-of-school children was over two million.

Some fear the school closures could put children in danger. ” Children who are out of school are at risk of recruitment to fight, ” said UNICEF Yemen Representative Julien Harneis. Since the Yemen conflict escalated in March 2015, the United Nations has verified that 1,210 children, some as young as eight years old, have been recruited to fight.

READ MORE: Yemen war: ‘My children are starving to death’

Harneis added that children have been killed on their way to school or while at school, and called on those involved in the war to ” keep children and schools out of harm to give education a chance. “

The Popular Resistance has been using about 30 schools in Taiz city, including large schools such as Zaid al-Moshki and Nema Rasam in order to train their new fighters.

“Taiz is under siege by the Houthis, so we do not have places to train the fighters. So we are using those schools,” a source in the Popular Resistance told Al Jazeera on condition of anonymity because he is not authorised to speak to media.

The source confirmed that the fighters left some schools in the city this year and that they will leave the others as soon as they find other places for the Popular Resistance to train and live.

“The students are our children, and we do not want to deprive them from learning, so we are cooperating with the education office to find alternatives to schools in houses, halls, or even hotels,” the source said.

“Students can study inside houses, but we cannot train inside them, and we also need yards for our military vehicles.” 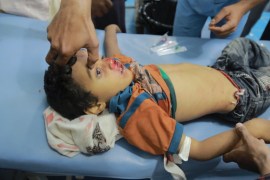