Ramallah, occupied West Bank – In a light-filled office in Ramallah’s first technology park, a group of sleep-deprived youth in their mid-20s are discussing the next steps to promote and develop their newly launched start-up.

BuildPalestine is a crowdfunding platform that aims to reshape the relationship between donors and the Palestinian cause by connecting supporters from around the world with local grassroots initiatives.

The platform, officially launched this week, aims to establish an alternative aid paradigm for Palestine, which has received more than $23bn from the donor community since the Oslo Accords were signed in 1993. Palestinians are among the largest per capita recipients of international development assistance in the world, yet critics believe that the aid industry has distorted Palestinian economic development, and that international donor agendas have interfered in internal political matters.

Meanwhile, the Palestinian economic outlook remains worrying, according to the latest World Bank report. The international body said that Israeli restrictions, including the Gaza blockade, are mainly to blame for slow economic growth, which has resulted in high unemployment and stagnation in the average income of Palestinians. Aid delays are also preventing any meaningful recovery in Gaza, as only 46 percent of the $3.5bn pledged at the Cairo Conference has so far been delivered.

“The overall objective is to connect and engage millions of supporters around the world, to build a network,” Besan Abu Joudeh, one of BuildPalestine’s cofounders, told Al Jazeera. The 26-year-old Palestinian-American moved to Ramallah a year ago with a desire to contribute to building the Palestinian economy.

“I saw a lot of issues, and the international community was not strategically engaged in tackling them. And it’s a huge resource,” she said, adding that her priority is to reach Palestinians in the diaspora like herself.

For now, the team is only equipped to take on small-scale projects that will benefit from a cash injection amounting to a maximum of $5,000.

A year ago, a group of five volunteers, part of the Palestinian Association of Emergency Medical Services, decided to start providing first-aid training to local communities in Gaza to enable them to deal with emergencies on site, before an ambulance arrives.

Hanan Abu Qassem, 28, one of the organisers, was working as a paramedic during the 2014 Gaza war.

“Ambulances often arrived late. Sometimes they were prevented from entering certain areas,” she told Al Jazeera. “With this project, I can save lives.”

The funds they seek will be used to print brochures, provide first-aid kits to different neighbourhoods and train first-aid responders.

BuildPalestine vets the projects it features on its platform, whose scope can range from education to youth to community development. Currently, donors can support higher education scholarships for young women from refugee camps; an educational programme by the Bethlehem Museum that aims to bring young Palestinians closer to their history via subsidised school tours and workshops; and a new women-focused project by Palestine’s only centre for music and art therapy.

Team members say that making donors feel safe is a priority at this stage, which is why, for the time being, it is not open to individuals, such as other crowdfunding platforms.

“The donor system, the way it’s set up, is that you’ve got your priorities that are set, and then your grant cycles that are run,” Abu Joudeh told Al Jazeera. “When the grant cycle ends, local organisations are unable to continue without funding, and we’ve seen that happen to a lot of great projects. This is the main downfall of having a donor-dependent economy.

“In the past year, we saw that aid to Palestine dropped significantly with the crisis in Syria and with alternative priorities around the world, especially from the Europeans,” Abu Joudeh added.

The foreign aid system, the way it has been applied in the last 20 years, has totally distorted the Palestinian market and society.

Meanwhile, according to a report published last year, the crowdfunding market grew in 2014 by more than 140 percent in both Europe and North America, and by more than 300 percent in Asia. Some $3.6bn was donated to social causes via crowdfunding in the same year, while more than 344 crowdfunding platforms existed in the United States alone in 2013. The numbers are growing, prompting the World Bank to release a study hailing its potential for the global south.

“The foreign aid system, the way it has been applied in the last 20 years, has totally distorted the Palestinian market and society,” Sam Bahour, a business development expert who is also part of BuildPalestine’s advisory board, told Al Jazeera.

“That ranges from skewing how the labour force is structured, with the cream of the crop going towards high-paying but short-term, international-funded jobs, which puts companies and local NGOs at a disadvantage,” Bahour said, adding that donor money is also being poured into donor agendas. “For example, 42 percent goes into security – and not one Palestinian feels secure – while education, agriculture, manufacturing, are completely collapsing.”

While BuildPalestine cannot be a substitute to reforming the donor system, “it works in parallel to that. It provides opportunities where funds go directly to the project – and that’s a powerful statement.” 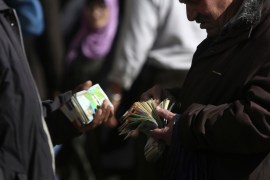 Palestinians lose $285m in revenues due to Israel deal