Israel’s national theatre company Habima, it was revealed, had agreed to perform for the first time in Kiryat Arba, a notoriously violent settlement next to the Palestinian city of Hebron in the occupied West Bank.

The move was a blow to Israeli artists who oppose efforts by Benjamin Netanyahu’s government to force them to treat the settlements as a “normal” part of Israel, said Ala Hlehel, a writer and cultural critic from Israel’s large Palestinian minority.

The settlements are illegal under international law and widely viewed as an insurmountable obstacle to a two-state solution.

Regev welcomed the decision, saying Habima had become a “central pioneer in treating all citizens of the state as equal in their right to experience culture”. But, according to Hlehel, the decision will intensify pressure for a cultural boycott of Israeli companies when they try to tour overseas.

“Israeli artists have long argued that they only deal with knowledge and culture and have nothing to do with politics,” he told Al Jazeera. “But that no longer sounds credible when Habima and others decide to perform in a notorious settlement like Kiryat Arba.”

Regev is like a politician from the dark regimes of Europe's past. She especially wants to silence the Palestinian narrative, and especially the Nakba and what really happened in 1948.

The Israeli Haaretz daily recently described Kiryat Arba, home to 7,000 religious extremists, as “a symbol of the injustices of the occupation”. It has erected a commemorative park to the late Rabbi Meir Kahane, whose virulently anti-Arab Kach movement was outlawed in the 1990s.

Many inhabitants continue to openly support Kahane’s views. The park includes the grave of Baruch Goldstein, a settler who shot dead 29 Palestinians worshipping at the nearby Ibrahimi mosque in Hebron in 1994. The grave has been a site of pilgrimage for extremist settlers ever since.

Ahmed Tibi, a parliament member from the Joint List party, accused Regev of using financial pressure to arm-twist cultural institutions into performing in the settlements.

He told Al Jazeera: “Regev is blackmailing Israeli artists and theatres to break with their consciences and perform in the occupied territories or lose their public funding.”

Since the summer, arts companies have had to fill out a form stating that they agree to perform in the settlements. Those refusing to do so face a budget cut of 30 percent, as well as becoming ineligible for a 10 percent bonus funding. The Israeli media noted that the cash-strapped Habima has been dependent on special handouts from the culture ministry for many years.

Regev, a former spokeswoman for the Israeli military and a member of Netanyahu’s ruling Likud party, was determined to silence those opposed to the government’s far-right agenda, said Tibi.

In addition to the demand that artists perform in the settlements, Regev has also begun drafting a “cultural loyalty law“. It would strip companies of public funds if they: question Israel as a “Jewish and democratic state”; denigrate state symbols such as the flag; or commemorate the Nakba, the catastrophe that befell Palestinians in 1948 when they were dispossessed of their homeland.

That has left artists from Israel’s Palestinian minority, a fifth of the population, especially exposed, said Hlehel. “The government always starts by targeting the Palestinian community [in Israel] because they are the most vulnerable and no one in the rest of the society is willing to stand up for them,” he said.

“But it won’t end there. The real goal is to use the fight against Palestinian artists to intimidate major cultural institutions like Habima.”

In recent weeks, Regev has twice publicly clashed with a well-known Israeli-Palestinian rapper, Tamer Nafar, whose lyrics are notable for tackling both the occupation and issues of racism towards Israel’s 1.7 million Palestinian citizens.

In September, during the Ophir film awards, she stormed out while Nafar recited lines from a poem by Mahmoud Darwish, the Palestinian national poet. She said the performance was “a disgrace in which red lines were crossed”.

And last month Regev continued her campaign against Nafar by demanding that the mayor of Haifa deny him a platform at the city’s annual Haifa Film Festival. Although Nafar’s performance went ahead, he faced sustained heckling from right-wing groups in the audience.

Notably during her speech at the film awards, Regev made a veiled threat to Israel’s film funds that she was still considering who to support in the future.

Nafar told Al Jazeera that Regev was seeking “revenge” for his recent film Junction 48, which was highly critical of Israel but received financial help from one of the funds. “Regev is like a politician from the dark regimes of Europe’s past,” he said. “She especially wants to silence the Palestinian narrative, and especially the Nakba and what really happened in 1948.”

Earlier this year, Regev insisted that all cultural and sports venues, including those located in Palestinian communities in Israel, should be required to raise the Israeli flag on national holidays such as Independence Day. That is when Palestinian citizens mark the Nakba.

Then in July she asked the attorney general how she could end funding for the Tel Aviv Cinematheque, a prominent arthouse cinema that has hosted controversial events, including a film festival on the Nakba and a conference for those refusing to serve in the army.

The same month she lashed out at Israel’s Army Radio for broadcasting a programme on Darwish, whose poetry often relates to the Nakba and Palestinian identity. She accused the station of “going off the rails” and urged the defence ministry to cut funds to the station.

Almost as soon as Regev took over the culture ministry 18 months ago, she clashed with Israel’s arts establishment, which is seen by the right as an outpost of liberalism. She called them “tight-assed, hypocritical and ungrateful” people who “think they know everything”.

In protest, dozens of artists greeted her at a theatre awards ceremony in Tel Aviv last year with their mouths taped shut.

But Sinai Peter, a professor of theatre studies at the Western Galilee College, near Acre, said Habima’s decision to appear in Kiryat Arba suggested Regev was turning a corner in her battle.

“She has been making an example of Palestinian artists to intimidate Jewish artists into submission, and in part it is working,” he told Al Jazeera.

Last year Regev targeted two prominent Palestinian theatres in Israel. Al Midan in the northern city of Haifa lost its funding for 10 months after it staged a play based on the lives of Palestinian political prisoners.

Regev also threatened the funding of Elmina children’s theatre in Jaffa, near Tel Aviv, after its actor-director, Norman Issa, vowed he would not perform in the settlements. Issa backtracked after a hastily convened meeting with Regev.

Peter said Jewish artists were increasingly reluctant to speak out. It was normal, he noted, to find a replacement for actors who objected to performing during the Sabbath on religious grounds. But he was unaware of any of Habima’s actors requesting to be replaced for the Kiryat Arba production next week on political grounds.

“It takes courage for artists to take a stand against the settlements when they see they have so little support from the wider Israeli public,” he said. “And they have to think where they will find work next if they adopt unpopular political positions.”

Nafar agreed: “Initially, there was a lot of opposition to Regev from artists but slowly she is winning. People are starting to self-censor, which is the worst kind of censorship.”

But Nadim Nashif, director of Baladna, an organisation helping Palestinian youth in Israel, said there might be a positive side to Regev’s insistence on “patriotism” from artists.

“For decades most preferred to claim politics and culture don’t mix,” he told Al Jazeera. “They avoided taking a clear position on fundamental issues, including on the settlements. Now that’s no longer tenable. They have to clarify where they stand.”

Nashif pointed out that Habima had been previously targeted by boycott protests. In 2012, there were large demonstrations both inside and outside London’s Globe Theatre as Habima staged a production of Shakespeare’s The Merchant of Venice.

“After it performs in Kiryat Arba, the protests are going to grow much larger. No one can any longer claim that Habima is engaged purely in cultural rather than political activity.” 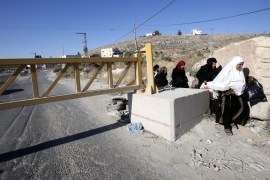 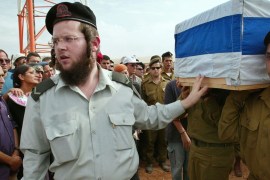