Athens – Introducing modern art to a culture brought up on marble columns and the galloping friezes of the Parthenon would appear to be a daunting and thankless task, but Katerina Koskinas, the director of Greece’s first National Museum of Contemporary Art, was giddy with excitement and lack of sleep on the eve of the museum’s opening.“We are very used to feeling proud about our past. Now I think the moment has come to bridge the past with the present,” she told Al Jazeera, sitting in the midst of the hangar-sized exhibition space, a converted brewery.

Power tools and cardboard boxes were strewn among equally everyday objects, which turned out to be priceless works of art.

“I think this is something that should have happened years ago,” she said.

Legislation establishing the museum, known as EMST, was passed 19 years ago.

Since then a permanent collection has been bought and the Fix brewery in central Athens refurbished, all at a cost of $37m.

Yet the museum never opened its doors until now, because successive governments fought over its regulations and administration.

The delays cost EMST a $3.3m European Union subsidy. It won a grant from the shipping-based Stavros Niarchos Foundation to plug the gap, only to see that too withdrawn a year ago because its doors were still shut.

Despite these problems, the opening of EMST is a breath of fresh air to artists, who have struggled during Greece’s economic crisis.

“Unfortunately our politicians are not art lovers,” says Kostis, a contemporary artist.

“At some point artworks were used as a proof of taxable income. That sent the art market underground … Collectors bought art from overseas. As a result, it’s now impossible to price Greek art because no one is buying it.”

EMST may not fire up the art market directly, since it is not an art broker, but it will make Greek artists more visible. Several are involved in the inaugural exhibition alongside Belgian artists sponsored by the Museum of Contemporary Art Antwerp, or M HKA.

Lucas Samaras worked with Jacques Lizene and Douglas Gordon to create The Unstable Self, a 20-yard-long array of precariously balanced objects.

A 16mm film spool is inserted on the bristles of a nailbrush. A wedge of wood balances on a cork. A glass sphere perches atop a bamboo cane.Greek society has been raised on classicism and is not used to such abstractness, but Bart De Baere, director of M HKA, warns that contemporary art “is not about solutions, about finished things. It’s more about a table where we can continue to reflect”.He points to a cloth covered with assorted tools, picture frames, an air duct pipe and a china head, among other things. “It’s a collection of unimportant things,” he says, “because there are no important things.”

OPINION: Greece and the swansong of the nation-state

This, at least, is a message likely to resonate with Greeks, who have given up more and more of their luxuries – and even necessities – during a grinding, nine-year recession.

“There is now a feeling of a divide between the north and south of Europe, and Athens is a symbol of that,” said De Baere.

“The central question of this whole exhibition is, ‘How can we live together?'”

Koskina adds an uplifting note, saying: “Even in the most difficult periods of our history and even now, because this is a tough moment for Greece, it’s through civilisation and culture that one can feel free.”

EMST was conceived in a period of optimism. In the late 1990s, Greece planned its new Acropolis Museum, now the country’s most popular attraction after the Acropolis itself.

Athens has since acquired two concert halls, and early next year will have a monumental national library and opera – a $600m cultural complex donated by the Stavros Niarchos Foundation.

Unemployment here still stands at 24 percent, but EMST is part of this massive, two decades-long investment in Athens as Europe’s cultural capital.

Greece has lacked a national goal as definable as the Olympic Games ever since it successfully hosted them in 2004. The shift to culture could emerge as Greece’s next national project. 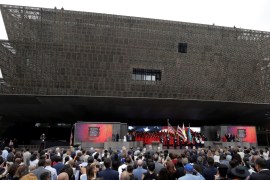 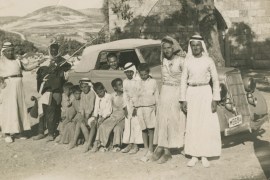