Detroit, Michigan – On a freeway overpass just outside Detroit, Tiffany Arnone, 34, braves the chilly weather and spurts of rain to wave the American flag.

It’s not difficult to guess who she voted for in this election.

Lining the fence on the overpass, she has hung signs that read “Christians for Trump”, “Women for Trump”, and “Unite Against Government Corruption”.

There are dozens more of the like, piled high in the trunk of her SUV along with miniature American flags, Donald Trump pamphlets and fact sheets she created and distributed herself.

Typically she has the help of 20 or so others, but so far today she is on her own.

“I hope it pours rain because I hear it keeps the Democrats inside,” Arnone, a lifelong Republican, says. “The colder and nastier it gets the more excited I am.”

Arnone works at a casino in downtown Detroit. But since August taking to busy roadways with her pro-Trump message has been her second job.

She said she doesn’t know if her efforts will pay off, but at least she can say she tried.

“I wouldn’t be out here by myself if I didn’t think Trump had a chance,” she says.

Arnone is difficult to hear over the rumble of passing traffic and constant car-horn beeping.

“This is nothing,” she says. “You should see during rush hour. I’m surprised we haven’t caused an accident.”

By 3:30pm, as rush-hour traffic begins, she says police ask her to leave the overpass but allow the signs to stay.

Arnone is a mother of three daughters. She supports Trump, she says, because she wants a good future for her children.

The appointment of a conservative Supreme Court justice and domestic security are her two main considerations this election season.

“Hillary is so corrupt,” Arnone says. “She has jeopardised national security.”

The video revealing Trump’s derogatory comments about women did upset her, Arnone says, but it did not change her mind.

“He’s no holy roller by any means,” she says. “But I think he’s changed. He won’t be doing that stuff in office like Bill Clinton.”

Besides battling weather for the past few weeks, Arnone and her Trump entourage have encountered plenty of anti-Trump backlash.

“People drive by all the time – mostly younger males – and shout stuff at us,” Arnone says.

She’s used to it now, she says, waving the American flag in front of her “Women for Trump” sign.

“If Trump wins, I’ll be hosting a party at my house,” she says. “If he loses, it’ll be a candlelight vigil.” 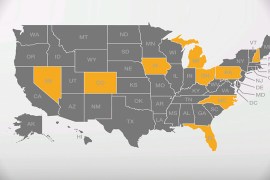 Five battleground states are key to watch as US election results start trickling in on Tuesday. 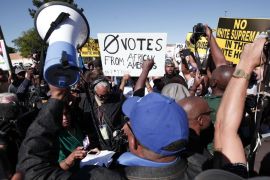 While Trump’s “law and order” rhetoric has alienated many, the legacy of Bill Clinton hangs over Hillary.