Tbilisi, Georgia – The bomb that destroyed a politician’s car in the heart of Georgia’s capital this week also ignited fears that Saturday’s parliamentary election could spark violence and destabilise this strategic – and often turbulent – Black Sea state.

Opposition deputy Givi Targamadze was not hurt when the explosion tore open the rear of his car near Tbilisi’s Freedom Square, but several passers-by were injured in an attack that some blamed on political forces and others saw as the likely work of Russia, the vast neighbour that crushed Georgia’s military forces in a brief 2008 war.

The blast highlighted the high stakes being played for in a nation whose pro-Western stance infuriates the Kremlin, and where the two biggest political beasts are now fighting the latest round in a bitter battle for power.

The election pits the ruling Georgian Dream party founded by eccentric billionaire Bidzina Ivanishvili against allies of the country’s former president, Mikheil Saakashvili, who vows to return victorious in the coming days from exile in Ukraine.

Having made his fortune in Russia, Ivanishvili plunged into politics in 2012 with the aim of ousting Saakashvili and his United National Movement (UNM), and he achieved his ambition with astonishing speed at elections that same year.

Ivanishvili, 60, is Georgia’s richest man. He has a lavish collection of modern art, keeps a private zoo and was criticised by environmentalists this year for having a rare, 650-tonne tulip tree dug up and floated down the Black Sea coast to one of his estates.

The billionaire accused his one-time ally Saakashvili of committing gross abuses of power during a period of dominance that began with the 2003 Rose Revolution. After seeing several of his former officials jailed, Saakashvili fled the country.

His departure and Ivanishvili’s resignation after just a year as prime minister robbed Georgia’s political stage of its dominant characters – but they continue to shape events from the wings, with Saakashvili still the star of the UNM and Ivanishvili pulling the government’s strings without the ties of political responsibility.

But now Saakashvili vows to return – and opponents say he will go to any lengths to secure a glorious homecoming.

“Three days are left before I cross this sea. We are three days away from the victory – see you in victorious Georgia,” Saakashvili told supporters on Wednesday by video link from the Black Sea port of Odessa in Ukraine, where he is regional governor.

“People are tired of the country being in ‘pause’ mode; people are missing drive, rebuilding and progress,” he told thousands of people at a final UNM campaign rally, where they waved Georgian and EU flags, blew vuvuzelas and beat drums.

“We are nearing the historic moment. The moment of truth arrives in three days,” Saakashvili said.

Most polls suggest the UNM is trailing Georgian Dream, but the two are far ahead of other parties and many voters are still undecided – leaving all to play for in the final days of an increasingly heated campaign.

On one such tape, a UNM deputy allegedly tells Saakashvili that “our task is to hold elections in a revolutionary atmosphere … This means stirring up the public.”

Saakashvili called the material a fabrication by an Ivanishvili camp desperate to avoid defeat, but Georgia’s security services are investigating – further complicating the potential return of a former leader who already faces abuse-of-power charges.

“In 2003, the UNM and Saakashvili challenged election results and started street protests that ended with a revolutionary change in power. There are messages coming that he’s planning to play the same trick – but now the situation is very different,” said Tamar Chugoshvili, head of international relations for Georgian Dream.

“You can’t artificially create a revolution when there is no revolutionary spirit or demand for such change … Maybe he’s using it to motivate his supporters but it is absolutely unrealistic, and he is under investigation so if he comes back he will be arrested,” she added.

“We don’t expect him to show up – it’s a hysterical show prior to the election, and we’re having fun watching him.”

Georgian Dream says it has boosted the country’s democracy, human rights, rule of law and social spending, while opponents accuse it of stifling the economy with bureaucracy and entrenching the “informal rule” of the oligarch Ivanishvili.

“They are also responsible for jailing top political leaders and for campaign violence,” said Giga Bokeria, a senior UNM member who during local elections in May was beaten up with several colleagues by thugs allegedly linked to Georgian Dream.

Bokeria, who was secretary of Georgia’s national security council under Saakashvili, said such attacks – along with a shooting at another opposition party’s event this week – showed that political violence was still a reality here.

“What we need is [Georgian Dream] to move into opposition, along with the billionaire (Ivanishvili) if he wants. We want Georgia to be a normal democracy – they are the ones talking about a coup d’etat, bloodshed and retribution,” Bokeria said.

“I don’t want to see people [protesting] in the street … Only the government can force them to do that by doing something outrageous. I hope the billionaire understands and has been told by his political puppets that Georgia is not like 2003, and no one should risk cancelling election results that they don’t like,” said  Bokeria.

Ivanishvili claims Georgian Dream will win by a landslide, while UNM insists it will at least match the ruling party on Saturday and then take most of the single mandate constituencies that are likely to be decided in a run-off a fortnight later.

“We need a big turnout and we will win,” Bokeria declared.

“And then I hope Misha [Saakashvili] and all other politically prosecuted people will be able to come back.”

Shaken by Tuesday’s bombing, most Georgians hope above all for a peaceful election.

The five-day war with Russia in 2008 over South Ossetia, a region of Georgia run by Moscow-backed separatists, damaged the 3.7 million-strong country’s economy and hopes of joining the EU and Nato.

Georgia is still under pressure from Russia, which has thousands of troops in South Ossetia and another rebel region called Abkhazia, and sees western-aligned states in its “backyard” as a threat to its national interests and security.

With the EU close to granting visa-free travel to Georgians, some in Tbilisi saw the bombing as a possible Russian effort to destabilise its neighbour and tarnish its image in western eyes.

“Georgia has so many challenges and Russia is the greatest. It’s regrettable that the two main parties don’t co-operate on key issues,” said Eka Gigauri, executive director in Georgia for the anti-corruption group Transparency International.

“And unfortunately,” she added of possible election unrest, “the main parties might not act in the interests of the country and might make mistakes.”

Irakli Alasania knows better than most what is at stake for Georgia – and what its two dominant politicians will do to secure power – having served as Georgia’s envoy to the United Nations under Saakashvili and defence minister under Ivanishvili.

“When people are shooting and bombs are exploding it scares a lot of people. And it raises the question of whether the state is capable of preventing this,” said Alasania, who now leads the opposition Free Democrats.

“The informal rule of Bidzina Ivanishvili is eroding institutions. People see that but they don’t want to go back to the brutality of the Saakashvili regime. Georgia doesn’t need either of them. They are both history, but they need each other to provoke conflict,” he added.

“I do see danger,” he added of the possibility of election violence.

“But even if there are provocations, I don’t think they will cause major confrontation. For that to happen, they would have to ignite the public mood – and that mood is just not there today.” 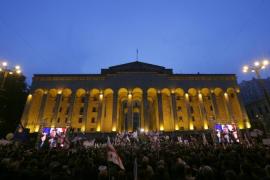 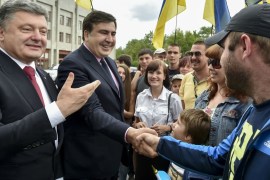