On the night of Halloween in 2000, Carmen Caballero, who was then eight, and her three-year-old sister put on witches’ costumes and met their aunt for a trick-or-treat excursion in their native city of Juarez, Mexico.

They piled into their aunt’s car and left. When the girls got out, they were in El Paso, Texas. At their parents’ wishes, their aunt had crossed the border and taken them to the US, where they still live today as undocumented immigrants.

“We came here tricked,” says Caballero, who is now 26. She only learned of her illegal status some 10 years later when the fact that she didn’t have a social security card meant that she couldn’t apply for a scholarship to attend college.

“When I turned 18 people asked me ‘Why aren’t you going back?’ and I couldn’t answer that, because I don’t know Juarez,” she says. “My life is here.”

Today Caballero is one of the nearly 11 million undocumented immigrants living in the US, according to the Center for Migration Studies. Like her, about 1.5 million reside in Texas.

Caballero lives in El Paso, the nation’s largest border city and a high traffic corridor for illegal crossings. About nine miles from the city centre, a new border wall is in the works.

Last August, in neighbouring New Mexico, the US Border Patrol began replacing the current fence in the last stretch of unwalled urban borderline with an 18ft-tall steel structure.

An agency spokesperson did not immediately respond to Al Jazeera’s request for comment, but according to a report by the Albuquerque Journal, the Border Patrol says the new fence is just a replacement of the old chain-link one.

Immigration in the US: A welcoming land?

Human rights activists, however, see it as yet another example of an increasingly strict immigration policy.

“Essentially, for nearly three decades, the United States’ only position towards migration has been that we are going to deter it without looking at creating a legal visa system that would meet our needs as a country,” says Brian Erickson, a border policy strategist for the American Civil Liberties Union (ACLU).

The deterrence strategy described by Erickson began with the toughening of immigration laws in the mid-1990s and was furthered as the immigration enforcement system was expanded after the 9/11 attacks.

“People that are not from the US tend to think the US [immigration] laws are humanitarian, that we’re the land that welcomes people,” says Melissa Lopez, a lawyer and executive director of the Diocesan Migrant and Refugee Services , which provides legal services to immigrants in Texas and New Mexico.

After 1996, with the enactment of the Illegal Immigration Reform and Immigrant Responsibility Act, those laws became more punitive, says Lopez. This “makes it incredibly difficult for people to obtain immigration benefits lawfully”, she adds.

Such policy has contributed to tearing immigrant families apart and keeping people like Caballero in a state of legal limbo.

“Every time I think about it, it’s really hard,” says Caballero, whose undocumented status means living in constant fear of being separated from her children, who are American citizens.

Al Jazeera first met Caballero at a class put on by the Border Network for Human Rights, a local organisation that helps immigrants who live along the southern border.

She was one of 11 undocumented women who gathered in a one-bedroom apartment in the suburban neighbourhood of Agua Dulce last September to learn their basic rights and how to deal with Immigration and Customs Enforcement officers, or ICE .

Their teacher was Gabriela Castaneda, a Mexican mother of three and a former undocumented immigrant.

“These are people who have a really undignified life because on a daily basis they fear that they may be stopped by a sheriff or that the neighbour is gonna call border patrol,” says Castaneda, who hopes the next administration will adopt an immigration policy based on integration.

“Walls are not the solution to this immigration system that is broken,” she says.

Risking death to be with your child

Since 9/11 there has been a huge increase in funding for domestic surveillance, immigration detention and border security, including the 2006 congressional act requiring 700 miles of fencing along the US-Mexico border.

The US Customs and Border Protection’s budget has increased [PDF] from $568m in 1996 to $3.8bn in 2015, with the goal of combating emerging threats posed by an increasingly sophisticated network of transnational terrorism and crime [PDF] , according to the agency.

The budget allocated to ICE, the federal law enforcement agency tasked with running the immigration detention system, has also surged to $6.2bn this year [PDF] .

The consequence has been a mass increase in the number of immigrants detained and deported in the past two decades, according to data from the Department of Homeland Security.

Under Obama some 2.5 million (predominantly male) people have been deported, more than under any other president in history, according to the data.

Castaneda’s husband is one of those men. He has been deported four times and is currently serving a four-year sentence in prison for illegal re-entry, a felony.

Once released, he has no chance of ever being able to enter the US legally, says Castaneda, who despite the economic and emotional strains of being separated from her husband, says she will stay in the US for the sake of her three children – all American citizens.

“I don’t want them to have the life I have in terms of poverty, in terms of not having a career,” she says. “I want to be able to offer them something better than I have right now.”

According to ACLU’s Erickson, these stories are common as the chance of a better life continues to bring immigrants into the country, regardless of how difficult, dangerous or costly it is to cross the border.

“The interest of being with your US citizen child or the need to put food on the table for your family, will always outweigh the threat of desert temperatures, incarceration and ultimately of death,” he says, referring to how the border wall and fences have forced people deeper into the desert, with deadly consequences .

“It has been proven throughout history that walls are not a good way to enforce our immigration laws, but for whatever reasons our government continues to believe that they are,” says Lopez.

‘We need bridges, not walls’

The current election cycle has brought the immigration issue to the forefront, with presidential hopeful Donald Trump guaranteeing more walls and deportations if elected.

As a protest against such a promise, last August the Border Network for Human Rights (BNHR) organised an event in an area by the Rio Grande, the river that is also the natural border between Mexico and the US.

The event, called ” Hugs Not Walls “, was meant to reunite – albeit briefly – 120 divided families from El Paso and Juarez, many of whom, according to BNHR’s director Fernando Garcia, hadn’t seen each other in years.

“We brought them together [to] hug and embrace,” says Garcia, describing the event as a message about the consequences of our current immigration policies. “There was a lot of love and a lot of pain,” he says.

It was here that Caballero met her Mexico-based relatives for the first time.

At the event, her mother, Isabel Hernandez, was overwhelmed with emotion when she hugged the sisters she hadn’t seen for 17 years.

“We couldn’t talk,” she says. “It was three minutes of crying, crying, crying.” Hernandez felt joyful and helpless at the same time, she explains. “I don’t know if I’ll ever be able to go back to Mexico but I hope one day we’ll hug each other again.”

Castaneda, who hasn’t seen her father in 20 years, helped organise the event. Even though she wasn’t able to meet any of her relatives, she rejoiced in seeing so many others embrace their loved ones. But for Castaneda this event was above all else a political protest.

“Unfortunately this harsh border policy is taking us apart,” she says. “What we need is family reunification, what we need is bridges, not walls.” 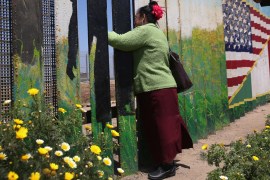 A look at the physical barriers and policies that separate the US from Mexico.