Paris, France – It’s a ‘jungle’ in the heart of Paris. Located in the city’s 19th arrondissement, hundreds of tents surround the Stalingrad and Jaures metro stations, stretching down Avenue de Flandre as far as the eye can see. As night falls, refugees shelter from the drizzle under rickety shelters made of tarpaulin and old shower curtains, congregating on dirty mattresses, clapped-out sofas and unfolded cardboard boxes.

Fatah Rahman al-Hazeen has just arrived from Calais, one of a steady flow of refugees into the makeshift camp, who slipped through the net of last week’s mass evacuation from the Calais ‘jungle’. The 22-year-old from Sudan decided to strike out for Paris rather than boarding a bus to one of the country’s 450 reception centres.

“They were saying they were coming to save us. I did not know the situation. I had to escape. I thought it was better to stay on the streets until going to Britain,” Hazeen says.

Still, he wonders if he should have come here at all. “Maybe it was a mistake to leave. I will go back to Calais. I am waiting to hear from friends.”

In Pictures: Flames, fear and football as Calais ‘Jungle’ cleared

As desperate as Hazeen may be for a warm place to sleep, he does not want to place himself in the hands of the French authorities. His big worry is that he may end up being sent to Italy, where he was registered last year in Naples. Under the Dublin Regulation , an EU law, migrants can be sent back to the country where they were first fingerprinted for their applications to be processed.

“They [the Italians] forced me to give my fingerprints,” he says. “They told me it was for all of Europe. There were two policemen. They took me on each side, took my finger and made me ‘Dublin’.”

Hazeen  claims the police in Italy beat him and attacked him with an electric prod. “We came here because we need freedom from war. But nobody cares about our situation,” he says.

“After they take all the people from Calais, then I will go – when it is quiet.”

Most of the people in the camp who spoke with Al Jazeera came from the south, mainly from Italy. But, numbers have risen substantially in the week since the demolition of the Calais “Jungle”. According to official figures, 5,596 people were evacuated from Calais out of an estimated total of 7,000, which suggests that hundreds are yet to be accounted for.

Reports on the figures vary, but Julian Mez from legal support group the Bureau d’Accueil et d’Accompagnement des Migrants (BAAM), says that numbers around Stalingrad and Jaures have risen from 2,000 to 3,000 in the past week alone. The estimates, he says, are based on refugees seeking advice from BAAM and reports from local associations that distribute tents and clothes.

Spokeswoman Melanie Rigaud says that reports from social workers and associations indicate there have been 70 to 80 new arrivals each day in Paris over the past week, as opposed to 50 to 60 each day the week before.

In the coming weeks, the city authorities will open a new refugee centre in nearby Porte de la Chapelle, with 400 places for male newcomers. After a period of five to 10 days – during which shelter and medical and legal help will be provided – the refugees will be sent to accommodation centres run by the central government.

But the centre will only take in new arrivals, rather than the people who are already in the city.

With this in mind, city hall has asked the central government to evacuate the Stalingrad camp and provide refugees with shelter before the refugee centre is opened. Rigaud expects this to happen soon. The French media reported on October 27 that the evacuation could take place in the next 10 days.

It wouldn’t be the first evacuation. On September 16, 2,083 refugees were evacuated from Avenue de Flandre, according to La Prefecture de Paris et d’lle-de-France, the regional police authority. In total, since June 2015, there have been nine evacuations from the area (see table).

On each occasion, new tents have sprung up to replace the old.

According to Mez, around a quarter of evacuees tend to return.

Bussed to emergency accommodation centres, many have to travel long distances to file paperwork and register with the local prefecture. It’s not unusual, he says, for people to end up sleeping rough while they are away, losing their place at the centres if they are away for more than three nights.

Emergency centres do not provide the structural support that refugees need, says Mez. They do not provide assistance with applications, language classes or even tickets to get to the places where their applications are being processed.

He believes asylum seekers should be given places at specialised centres, known as Centre d’accueil de demandeurs d’asile ( CADA ), where they can be given proper support.

“As long there’s no political will to provide a long-term solution, these camps will continue to exist,” says Mez.

He believes the new city hall refugee centre is like simply sticking a plaster onto the problem.

“It’s allowed city hall to say they’re doing something, while allowing the police to conduct their evacuations,” he says.

At lunchtime on Avenue de Flandre, the smell of Tiep rises through the air. A long line of Ethiopians, Eritreans and Sudanese shuffle forward to receive the plastic containers.

All the talk is of Calais.

Ahmed Mourtada, 18, from Nyala in Sudan, limps to the queue. He injured a toe on his right foot, which is now wrapped in a bandage. He arrived from Italy two weeks ago, planning on reaching Calais so he could join his brother in Manchester in the UK.

“In three days, I will go, when my foot is better,” he says.

Mario Oliveira, director of local Adventist charity ADRA, says that most want to reach Britain, whether to join family or because they already speak English.

Over the past two days, the charity, which is supplied with meals and sandwiches by restaurants and volunteers, has served an average of 200 more meals a day over the past week, taking the total to 1,300 meals. With the recent influx of newcomers from Calais, he expects a new evacuation to happen at any time.

But they’ll be back, he believes.

Two days after September’s evacuation, the charity found itself providing 600 meals. “It’s a question of networks and applications,” Oliveira says. “It’s in their interests to stay here.”

In any case, ADRA is in it for the long haul, planning to invest in a food truck so volunteers can heat food over the winter months.

“This problem is not going to go away anytime soon,” says Oliveira.

That night, a group of men huddle in their tent, listening to Ethiopian jazz through speakers connected to a phone. Temesghen Zeray, 24, from Asmara, Eritrea, is another new arrival from Calais. After four months in the Jungle, he left as soon as he got wind of the evacuation.

“Those buses were only good for underaged,” he says, expressing fears that, as an adult male, he would more than likely have been deported.

Frightened, he walked and hitched to Paris. It took him four days to reach here. “I thought it would be better to wait here, then go back to Calais later,” he says. He is waiting to hear from friends before making another attempt to cross the Channel.

“I left Eritrea because of the conflict, the dictatorship. I wanted a safe life,” he says. France is no good. Language is too difficult. There’s no food, no place to shower, no clothes.” He waves a hand at the squalid conditions in the camp.

Over at the Jaures station, Afghan refugees have been sleeping beneath the railway bridge and across the road by the Saint-Martin Canal. One man at the makeshift camp is belting out a tune on a battered guitar, while others bang on the bins and dance wildly for no particular reason. “It’s because it’s not raining,”  says one person.

A group of men tell of a police raid that took place here just last week. The tents by the canal were destroyed, leaving many sleeping in the rain in front of Ofpra, the government agency that handles asylum requests, just across the road from Jaures.

The Prefecture de Police, which is charged with security in the city, says that they have no record of this. But a local support group, Le Comite de Soutien des Migrants de La Chapelle, uploaded a video of the incident, which took place on October 20, on its Facebook page.

Local volunteer Jale Gokcen arrived on the scene while police were still there. Gokcen is part of an online network of locals that puts out calls on Facebook for donations.

“We needed to find new tents and jackets for them,” she says. “It’s getting tiring replacing things after the raids.” Interest comes in spurts, but sometimes it wanes and tents are harder to find, she says.

Ali Husseini, 21, from Mazar-e-Sharif in Afghanistan, is hanging out outside the metro station, waiting with friends to see if food will arrive. He got here three weeks ago with his younger sister and brother. He was studying electrical engineering at Shiraz University in Iran when he lost his father in a Taliban bombing.

“I had to return to take my family to safety,” he says. As members of a Shia Muslim minority group, their lives were constantly under threat. “I am now the father of the family. I brought them here so they would not be killed,” says Husseini.

“And they say that Afghanistan is safe now”, he says.

After a journey that saw him and his siblings cross 10 countries over one year, he is now anxious to apply for asylum in France as soon as possible. Under a controversial EU deal with Afghanistan , unveiled at the beginning of October, more than 80,000 asylum seekers could be sent back to the war-torn nation.

Rahman Safi, 28, from a village in Afghanistan’s Kapisa province, has been here around two weeks. He says he fled from the Taliban a year ago after receiving death threats, almost drowning in a dinghy on the way to Greece and strapping himself under a truck to reach Italy. Having reached here without leaving any fingerprints anywhere else in Europe, he is now applying for asylum in France.

Eager to obtain asylum as soon as possible, he travelled outside Paris to the small town of Limay, where he heard applications were being processed faster. Now he has to report to the Versailles prefecture, which is on the outskirts of the city, next month. He is currently trying to raise money for train and metro tickets.

According to Ofpra, 31.5 percent of asylum applications were successful in 2015, an increase on the previous year, but still well below the European average of 52 percent. Ofpra declined to fulfil Al Jazeera’s request for a breakdown of figures on failed asylum claims, whether based on being classified as economic migrants or as a result of the Dublin Regulation.

In the wake of the French government’s large-scale operation in Calais, people have a sense that doors are closing fast. Safi hopes it’s not too late to squeeze through.

“Maybe I arrived in time,” he says. “This is my last chance.” 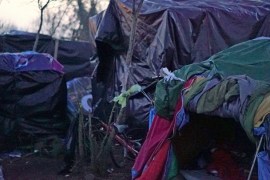 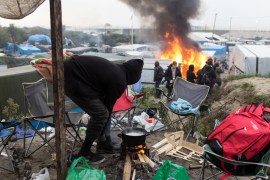 French government finally moves to clear camp and declares operation a success, despite many refugees returning.