By Preethi Nallu and Dylan Collins

Athens, Greece – There is very little that Masood Qahar cannot do.

From arbitrating feuds between young men in the camp to cajoling children to learn how to count, his days are a far cry from whiling away time. He has become an accepted “elder” of the makeshift camp, despite being only 33.

Any claims that he would become a social or financial burden on the community that has the “heart to adopt” him – as he puts it – is a non sequitur.

Qahar is among more than 3,000 Afghan refugees staying at the makeshift refugee camp in Elliniko, outside the UN-managed premises. The old Athens airport and the adjacent former Olympic stadiums, part of the the dilapidated complex that sits on a 1,530-acre plot, have become a manifestation of the neglect and malaise that a majority of 50,000 stranded asylum seekers in Greece are experiencing.

With the Balkan countries closing their borders, the EU-Turkey deal stipulating that all asylum seekers who entered Greece after March 20 will be returned en masse to Turkey, and an incapacitated Greek asylum system, Afghan asylum seekers face a particularly precarious situation. Their country is now deemed “post-conflict”. This means that they can be returned directly to Afghanistan.

Amid the current impasse on the issue of refugees, especially those stranded in Greece, the European Council will co-convene a summit with the government of Afghanistan, on October 4, in Brussels to be attended by 70 government representatives and 20 international organisations. While pledging to work towards “sustained political and financial support to Afghan peace”, as its goal at the high-level summit, European leaders are using a different vernacular in their back-channel diplomacy.

The EU Council document [PDF] leaked to the media earlier this year offers a glimpse of Europe’s reluctance to resettle Afghans who are already on the continent among its 28 member states.

The document reveals heavy-handed language and plans to return 80,000 returnees from Europe to Afghanistan.

Nassim Majidi, founder of the think-tank Samuel Hall and a leading migration specialist, hopes the EU will withdraw these plans. The target of 80,000 returnees is simply not realistic given lack of absorption capacities in Afghanistan and the destabilising effect on its urban centres,” she said, speaking to Al Jazeera English after a recent field visit to Afghanistan.

About 176,900 Afghans applied for asylum in Europe in 2015, double the previous year’s number. Rapidly deteriorating security conditions in Afghanistan are major triggers, and the last year was the deadliest since the NATO invasion.The UN Assistance Mission in Afghanistan (UNAMA) recorded 11,000 casualties, and at least 5,166 casualties in the first half of 2016.

Qahar inhabits a 4×4-metre tent set up next to the empty parking lot of the old airport. With a computer science degree and a CV that boasts years of experience with logistics and programming with the NATO-led International Security Assistance Force (ISAF) in Afghanistan, Qahar is certainly skilled. Yet the current asylum laws that have relegated Afghanistan to a non-emergency status will likely deem Qahar an “economic migrant”.

Despite acknowledging the rise in “terrorist attacks”, the EU document makes an artificial distinction between “refugees” and “economic migrants” by claiming that “82 percent of household youth and 72 percent of students point to unemployment and poverty as their major concern in Afghanistan right now”.

But Electra Koutra, a Greek human rights lawyer who represents individual asylum cases says that the EU is using the Brussels Summit as an opportunity to build a barricade against refugee flows.

More than three decades of conflict have led to a protracted refugees crisis, the largest in the world until 2013. The chronic situation has unravelled community structures, traditional livelihoods and educational systems.

“The EU is exchanging money with returning people to unsafe places that are intentionally, and unfoundedly, baptised as ‘safe’,” claims Kouda.

IN PICTURES: Refugees in Greece in a never-ending ordeal

Displacement has been an unrelenting narrative of this community of refugees. Most Afghans in Greece describe several instances of displacement – first within their country, followed by flight to Pakistan or Iran depending on financial resources, and finally the long journey to Europe through Turkey, through either the Western Balkan route or the Aegean Sea.

Alongside addressing the needs of those internally displaced inside Afghanistan, “preventing secondary migration” should be at the forefront of the agenda in Brussels, according to Dan Tyler, protection adviser in charge of the Afghan refugee programme at the Norwegian Refugee Council (NRC).

In addition to gathering funds and taking stock of the current situation in Afghanistan, the conference should pay “more attention to the needs in the immediate region [Pakistan, Iran] and improving the return environment,” explains Tyler. Meanwhile, he thinks that orderly returns will be difficult, if not impossible, to sustain.

To stay or to go?

To stay, to move on, or to return – those stranded in the departure lounge of Greece’s abandoned international airport ruminate on their options in a repetitive cycle. Many are anxiety-ridden, and some openly complain that the premises get tense, especially at night, and that the levels of friction among the residents have progressively increased.

With refugees hailing from rival ethnic groups, the same communal tensions that have become pervasive in Afghanistan also erupt from time to time in this cramped holding.

Most refugees at Elliniko, including those who have agreed to a “voluntary return” to Afghanistan, are already planning their onward journey.

Nineteen-year-old Suheil Rahimi, a Baloch from a village in southern Afghanistan, equates home with strife, blockades, tribal feuds and a Baloch nationalist insurgency that is as old as his country.

“I know the border won’t open, but I’m stubborn. I won’t return to Afghanistan. That’s not an option for me. I will use a smuggler,” he insists.

Rahimi tried to make a life for himself in Kabul, but communal threats followed him to the Afghan capital. He describes increased attacks and constant tensions between the Pashtuns, Tajiks and Baloch during his time there.

He has now been in Elliniko for six months.

Those like Rahimi, who never had the opportunity to develop a sense of community in Afghanistan, or an attachment to ‘home’, are resolute. They will stay or move forward.

The Elliniko airport is one among many abandoned spaces that have been repurposed as shelters in Greece. But the complex is also prized land. In early 2017, the 68-year-old structure will be remodelled into a luxurious coastal resort.

While this metamorphosis is expected to inject new flows of investment into the Greek capital, it will spell disaster for more than 3,000 of the most destitute asylum seekers from Afghanistan living here, who will become homeless for yet another time. The alternative scenarios of deportation under the EU-Turkey deal or returning under voluntary repatriation to Afghanistan, are equally dismal for the residents of Elliniko.

No safe country for return

Jamal Rasuli is among those who have been persuaded to return to his war-torn home. Like many others, he feels that the situation inside these refugee camps will soon implode.

“After living in this airport for seven months, I’d rather go home and face the Taliban,” he says.

His hometown of Farah, Afghanistan, boasts a citadel dating back to Alexander the Great’s time. The structure became a garrison for Mujahideen forces in 1979 during the Soviet invasion. With Taliban entering the political fray, Rasuli is not on the best footing with the local authorities.

The fitness gyms he owns in Farah are habitually frequented by Afghan army personnel, rendering him a target in the eyes of the Taliban. “So now the Taliban think that I work with the army or the ministry of defence. That’s why I left – because there was a threat against me and my family,” he explains.

Nassim Majidi, the migration expert, explains that the “voluntary-forced” dichotomy is not easy to negotiate in a protracted conflict situation such as the one in Afghanistan. “People will simply leave again,” she points out.

Tyler at the Norwegian Refugee Council points out that lack of information about the rules might also mean that refugees are not fully grasping the consequences of “volunteering” to return.

“Returns without integration are both unrealistic and inappropriate,” he says.

READ MORE: An Afghan refugee in Europe – ‘All I can do is pray‘

Speaking with people in the camp, one is both impressed by their relentlessness and alarmed for their futures.

Most have come too far to return, and almost all of them have lost support systems at home. But remaining in an ad hoc shelter that is scheduled to be demolished is hardly a long-term solution.

With eviction notices bound to arrive to Elliniko in the near future, the brief sense of stability that the disused airport has provided to these weary travellers will soon be gone.

With the borders to Europe closed, and the prospects for asylum in Greece increasingly bleak, their futures look more precarious than ever.

Qahar is among those who will pay what it takes to move on. He is prepared to continue through Greece’s Patras to Italy or even negotiate a price with the notorious smuggling rings that have set up in the forested borders of Bulgaria.

“I have to keep moving forward and onward. What I left behind no longer exists,” he says with a smile that struggles to conceal his worry over yet another foreboding journey.

Increasing tension between locals and refugees stranded on Greek islands, as all sides appeal for help. 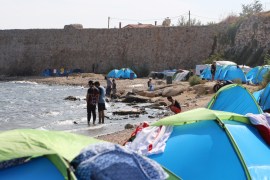 More than 3,600 refugees live in poor conditions in abandoned Olympic stadiums and an old airport in Athens. 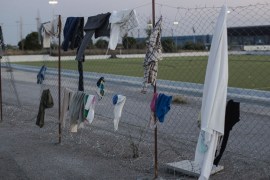 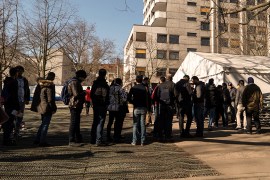