Much to the frustration of many European tourists, it’s not uncommon to be turned down by a taxi driver in Bangkok. But this time, what the driver said next was unexpected.

“You can get a free ride over there,” he said, gesturing towards MBK, the Byzantine shopping maze that was once the largest mall in Asia.

True enough, a line of motorcycles, tuk-tuks and vans waited near the mall, their drivers clad in black, ready to take all-comers to the Grand Palace.

The occasion: the first full day for mourners to be allowed into the Grand Palace to pay their respect to King Bhumibol Adulyadej.

The late king was widely revered in Thailand, and enormous crowds were expected as people from across the country made the journey to Bangkok to see his coffin.

A quota of 10,000 people every day for two weeks are allowed to enter the throne hall, where the king’s body lay in state.

For many who saw the king as a divine figure, this was no ordinary trip, but a pilgrimage.

The journey to pay respects holds a sacred element in many Thais’ hearts – so much so that the driver of my free ride to the palace refused to accept any tip.

The motorcycles and tuk-tuks at MBK were just a small part of the system that had swung into action to handle the influx.

Free buses were arranged from all over Bangkok, and extra trains from around the country had also been organised, some free as well.

To provide space for those congregating here, cars weren’t allowed any further than Sanam Luang, the public square in front of the palace. On disembarking here, long queues of mourners were guided by officials towards a group of tents forming a perimeter around the field.

Inside the perimeter, the queues were even longer, snaking back and forth across the massive field. It quickly became clear that the number of people here far exceeded the 10,000 a day quota, and many would be turned back.

The huge turnout led Thai authorities to scrap an opening time of 8am, letting people in from 5am instead.

With about 70 people allowed to enter the throne hall at a time, the waiting time to enter was greater than five hours for most.

On a rainy day, this seemed to deter few – many had camped overnight, braving the stormy weather, and continued to picnic on the field as they waited their turn, swapping stories about the man who had been the only king most of them had known during their lifetimes.

“After the king died my friends and I just sat around the whole weekend and cried and cried,” said Kamolpat Pisek, a building manager. “There’s so many great things he did that I am learning about only now. I wish I had known these stories while he was still alive.” 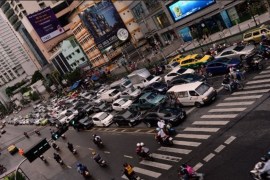 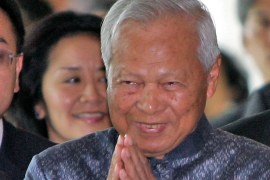