In a North Carolina coliseum, five young women are beaming after hearing US First Lady Michelle Obama speak. The event at Wake Forest University was a political rally for a former first lady, Democratic presidential nominee Hillary Clinton. But the main attraction was, without a doubt, the current first lady.

The US election season isn’t over yet but these women are ready for the next one.

“It would be really incredible if Michelle Obama eventually ran for president,” says Yasi Emamian, 21, enthusiastically.

“She’s just so inspiring, so strong and every single time I hear her speak, it makes me not be as frustrated with every other thing going on in this election,” says Elizabeth Lordi, 18.

Obama made history by joining Clinton, for the first time, on stage on Thursday, a point she acknowledged.

“I know that there are some folks out there who have commented that it’s been unprecedented for a sitting first lady to be so actively engaged in a presidential campaign,” she told the capacity audience. “And that may be true, but what’s also true is that this is truly an unprecedented election. And that’s why I’m out here.”

Not only is the first woman nominee of a major political party running for president, but both first ladies are united by an opponent whose remarks about sexually assaulting women has forced people like Obama to wade into much more political terrain.

In a 2005 taping for a US entertainment magazine programme, Republican presidential nominee Donald Trump is overheard bragging about forcing himself on women without their consent. “Just kiss. Don’t even wait,” he boasts. “You can do anything. Grab them by the pussy.”

That tape was released just two days before the second presidential debate.

Within a week, multiple women came forward alleging Trump did exactly what he spoke about.

Michelle Obama had heard enough. In an October 13 speech in New Hampshire, the mother of two daughters who’d spent her entire time at the White House promoting initiatives for young women and girls around the world, went after Trump.

“I have to tell you that I can’t stop thinking about this,” Obama told the crowd. “It has shaken me to my core in a way that I couldn’t have predicted.” She went on to attack the Republican nominee without naming him, adding, “Now is the time for all of us to stand up and say enough is enough. This has got to stop right now.”

It was a defining moment in the campaign. Obama had already wowed the Democratic National Convention in July with a powerful speech which included a phrase that’s become a signature rallying cry for Clinton at campaign stops: “When they go low, we go high!” But her New Hampshire remarks raised expectations that she was preparing to follow in Clinton’s footsteps.

It’s doubtful it will ever happen, argues Chris Galdieri, assistant professor of politics at St Anselm College. “I don’t think she has that same motivation [as Clinton].” He notes that President Barack Obama has repeatedly made a point of telling the media his wife is eager to leave the White House.

In a January interview with CBS News, when asked whether he’d ever consider staying if a third term were permitted under the US Constitution, Obama answered he’d decline. “Number one, Michelle wouldn’t let me,” he said.

But Bill Schneider, professor of public policy at George Mason University, thinks it’s entirely possible Obama will seek political office. “I can tell you she is taken seriously by an awful lot of Democrats,” he notes. The key, he adds, is finding a state where she can run for either the US Senate or a governorship. “She could probably be elected a senator from California without any trouble.”

That’s the path Clinton took. After leaving the White House in 2001, she ran successfully for the US Senate that same year. She served for eight years before becoming Obama’s secretary of state and then the Democratic presidential nominee.

Even if Michelle Obama shuns the politician’s life for herself, her fans believe she’s already a tour de force.

“I know she’s going to be an influential person, regardless,” says Wallis Herzog, 18. “I’m in awe of her always.” 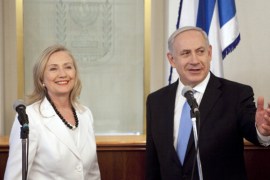 Harder times for Palestine if Clinton wins US election

It is clear that Hillary Clinton will not be visiting any Arab capital with a proffered fig leaf. 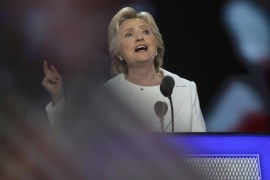