San Salvador, El Salvador – Maria Teresa Rivera wept with joy when she was released from prison last May, after serving four-and-a-half years for a crime she says she didn’t commit: the murder of her newborn baby.

But months after she was exonerated and reunited with her 11-year-old son, Rivera fears that she could be sent back to prison after prosecutors appealed for the original verdict of aggravated homicide to be reinstated.

“I feel threatened by the state. At any moment, they could put me back in prison and separate me from my son again,” 33-year-old Rivera told Al Jazeera.

Rivera is among dozens of women to be prosecuted in El Salvador since abortion was completely banned in all cases in 1998. The tiny Central American country is one of five countries where there are no exceptions to abortion – even in instances of rape, when the mother’s life is at risk, or if the foetus suffers a deformity.

A presumption of guilt

According to reports by the Salvadoran Citizens’ Group for the Decriminalisation of Abortion (CFDA), at least 250 women were reported to the police between 2000 and 2014, of whom 147 were prosecuted and 49 convicted – 26 for murder and 23 for abortion.

The vast majority were like Rivera: young, poor and single, and lost their baby after suffering an obstetric complication during pregnancy.

At least 25 women who are currently detained – either serving long sentences for murder – or awaiting trial, but the actual number could be much higher as there is no official register, according to Sara Garcia from the CFDA.

“It’s impossible not to think from [Rivera’s] case and others that there’s a presumption of guilt rather than innocence based on the misogynist prejudices held by judges and the rest of the criminal justice system,” Garcia told Al Jazeera.

“Even when they are freed, the legal harassment doesn’t stop. The state uses every resource to appeal and appeal and keep persecuting these women.”

Rivera said she feels mistreated by the system. “I’ve already missed so much of my life, my son’s life. I didn’t do anything wrong but they want to send me back to jail.”

Rivera was born into a poor family in a rural village in La Libertad. In 1988, during the civil war when Rivera was five years old and her brother just two, her mother vanished.

“Life was very hard without our mother. I left kindergarten to sell fruits and vegetables with my aunties so we could eat, but at mealtimes my brother and I were given only tortillas with lemon. I remember the suffering like it was yesterday.”

At the age of eight, Rivera was raped by a stranger who attacked her while she was walking home alone one evening.

Soon after, she and her brother went to live in an orphanage near the capital. She finished high school and dreamed of studying business administration, but with no money to continue her education, she started work.

Rivera is hard-working – a grafter with an entrepreneurial instinct, and she carved out a living working multiple jobs in factories, retail and even started a small fireworks business.

Her son was born in May 2005 with serious respiratory problems after an atypical labour with no contractions or pain. Domestic violence ended the relationship with her son’s father, but his mother – whom she still calls suegra or mother-in-law – remained supportive, and together the two women raised the boy and made ends meet.

In January 2011, Rivera confided in her boss at the clothes factory, where she worked for $5 a day, that she could be pregnant as her period hadn’t come. At the time, Rivera was involved in a brief relationship.

But her menstrual cycle had always been irregular, and she got her period in February and every month thereafter; there were no typical signs of pregnancy.

Then late at night, on November 23, 11 months after her initial suspicion of pregnancy, Rivera felt unwell.

“I thought it was something I’d eaten and rushed to the toilet, I felt something drop and realised I was bleeding. I shouted to my suegra to call the police. That’s the last thing I remember.”

In El Salvador, people always call the police in an emergency.

Rivera woke up in hospital surrounded by doctors and nurses, asking her where the baby was.

“I kept saying, ‘What baby? I’m not pregnant.’ They didn’t believe me. A nurse or doctor called the police, saying they had a case of suspected abortion.”

Unknown to Rivera, she had given birth in the toilet, where the newborn was found dead by investigators.

She was detained for aggravated homicide – not abortion; her son was six years old at the time.

The judge presiding over River’s case highlighted two pieces of evidence before giving his guilty verdict.

First, the testimony from the factory boss in whom Rivera had confided in January 2011, supposedly proving that she knew she was pregnant, according to the judge, despite the fact that this happened a full 11 months before the incident.

The autopsy report said the baby was full-term and gave perinatal asphyxiation as the cause of death, from which the judge inferred Rivera had smothered the newborn intentionally.

Rivera was sentenced to 40 years in prison.

“I felt I’d lost everything – my dreams, my son, my life,” said Rivera, still emotional when recalling the verdict. “If I’d known I was pregnant, I would have done everything possible to protect my baby, but no one believed me. At that point, all I could do was pray for a miracle.”

Life inside prison was tough. She was taunted as a “baby killer” and slept on the concrete floor for the first 16 months because of extreme overcrowding. Rivera cleaned toilets, washed clothes, and collected rubbish in order to make a few dollars to pay for soap, shampoo and water as prisoners receive only two litres each day for washing and drinking.

She saw her son only twice during her four-and-a-half-year stay in prison.

The CFDA took up Rivera’s case a few months after she was sentenced and mounted a legal defence, but every appeal was rejected.

Then, a campaign was launched in 2014 by a coalition of groups including the CFDA, unions, and feminist organisations seeking parliamentary pardons for 17 women, including Rivera, who had exhausted all legal options. Two of the Las 17 were pardoned, but Rivera’s case was again rejected.

READ MORE: In El Salvador, a pregnancy complication followed by a prison sentence

Rivera almost lost hope, but in a shock move, the Supreme Court’s criminal chamber agreed to review her case after lawyers applied for a habeas corpus.

Rivera was freed on May 20, after the judge ruled that the prosecution had failed to prove her guilt at the initial trial, and so there was no legal foundation for her sentence.

“Maria Teresa’s case is emblematic – not just because she received the longest ever sentence, but also, she’s the first woman the state has been ordered to compensate for the damage caused by the wrongful conviction,” said Dennis Munoz, a lawyer who has helped free 11 women wrongly imprisoned for murdering their newborns.

“Prosecutors present incredibly weak cases which rely on outdated scientific methods and fail to prove intent and whether the abortion was induced, yet judges don’t demand anything better,” Munoz added.

The attorney general’s office in charge of Rivera’s case, however, told Al Jazeera that the judge had wrongly overturned the sentence. That’s why the state immediately launched an appeal in the hope that Rivera would be returned to jail to complete her 40-year sentence, or a new trial ordered by the court.

“No new evidence was presented, just new opinions about what might have happened … opinions paid for and prepared by the defence. The original verdict and sentence were correct, and that’s what we’ve asked the superior court to reinstate,” a spokeswoman for the general attorney general’s office said.

Earlier this week, however, the appeal to reimprison Rivera was rejected, but the nightmare may not be over as prosecutors told Al Jazeera that they would consider appealing to higher courts.

There is a glimmer of hope, however, that the abortion law be relaxed.

In an unexpected move, the ruling party recently proposed reforming the criminal code to permit abortions in limited circumstances, such as rape, victims of human trafficking, foetal abnormalities, or if the pregnancy endangers the mother’s life.

It’s the first time the nominally left-wing Farabundo Marti National Liberation Front (FMLN) – which has been in power since 2009 – has sought to advance reproductive rights.

But, it’s an uphill battle as at least 12 opposition politicians in the Legislative Assembly must also vote in favour of the reform as the FMLN does not hold a majority. Furthermore, earlier this year, politicians from the main opposition party even proposed increasing the maximum sentence for abortion to 50 years.

For Rivera and other women like her, the fight goes on.

“I always wanted to be someone in life, to study and leave behind the poverty I was born into,” Rivera says. “Now, I think about leaving El Salvador for a place where people don’t know my story – so I can be invisible, and make a better life for my son.

“That’s what I dream about now.” 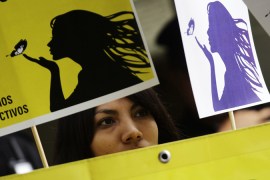 Life at any price

Are El Salvador’s abortion laws endangering some women’s lives while putting others behind bars? 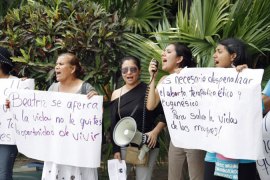 Officials say that granting a life-saving termination of an unviable foetus would be first step towards legal abortion. 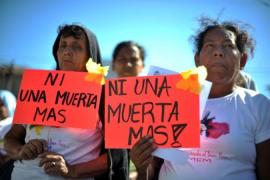 Women’s rights should become part of the citizens’ security agenda. 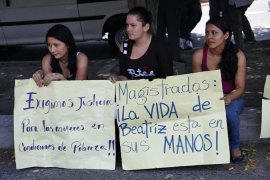 Doctors perform caesarean section on mother to save her life, but child dies five hours after birth.