Calais, France – In the half light of the blanket-lined tent, Majdi Idris sat quietly, listening to muffled explosions as fires spread through the Jungle of Calais.

He had the letters “UK” shaved onto the side of his head, testament to an unfading hope to reach England, where his older brother lives. But the mass eviction of the makeshift refugee camp in Calais was well underway, and as a 16-year-old living alone for a month here, he had no idea where to go.

“It’s like home,” he said, the noises bringing back memories of his home in a conflict-wracked region of North Darfur. “I don’t know what to do.”

Volunteers rushed by, checking for any left-over fue cylinders, used for stoves, that had been blowing up in the flames, like bombs.That morning, Majdi had made his way in the pre-dawn darkness to line up for registration as a minor.

He waited hours on a road outside a warehouse, where people were being processed, most put on buses headed to other regions of France.

But those who were underage and unaccompanied were being given grey and yellow wristbands, enabling them to stay on site in containers and have their claims for asylum and family reunification processed there.

For the third time in two days, Idris had been turned back. The officials said he looked too old to be a minor and he didn’t have documents to prove otherwise.

He was 15 when he left Darfur, travelling for nearly a year to reach France, stuck in Libya for months waiting to cross the sea to Italy in a packed smuggler’s boat.

He knows no one in France and wants to be allowed to cross to England so that he can live with his older brother Ahmad, in Manchester.

The registration process outside the warehouse in the sparse industrial area near the port, a 15-minute walk from the camp, had been calm and moved quickly on Monday.

But by Tuesday, it repeatedly turned into a bottleneck, with only certain groups let through depending on the hour.

At one point, a line of armed border police were screaming “Go back, go back!” at around 100 minors, forced to sit down on the cold tarmac of the road and shuffle backwards in the crush of the crowd.

Many had arrived hours before dawn and slept on the road, waiting without water or food in the cold morning. By Wednesday, even volunteers trying to maintain calm and provide information to everyone in the camp, particularly teenagers, were given no information as to what time they should come.

The only time he had managed to reach the registration point, he says they had looked him over and made a snap judgment that he was not “bambino”, not under 18 years of age. They didn’t believe he was 16.

IN PICTURES: Flames, fear and football as Calais ‘Jungle’ cleared

Idris says the home office had even called his brother in Manchester, at one point. His brother had agreed to take full responsibility for him and tried to make his case for family reunification, but Idris was still unable to register.

Commitments were made to ensure that unaccompanied minors would be registered and accounted for before demolition began, and the Dubs Agreement was passed by the British government. It promises that unaccompanied minors without family in the UK will be allowed in. But despite this, many young people were still waiting to be processed and sleeping in the camp as digger trucks began breaking up the makeshift homes.

Like Idris, many had queued for hours to receive the wristband that would allow them to enter more secure container accommodation, but had returned unsuccessful in their mission.

On Wednesday, they gathered outside the gates of the container accommodation, sitting on a dirt ridge as volunteers from the Refugee Youth Service tried to read the younger ones children’s books to keep them calm, or tended to burns and cuts from the fires of the night before.

Dreaming of the UK

On Monday, a 17-year-old from Afghanistan, standing outside the containers with a wristband to enter, was busy trying to convince his friend, who was also under 18, to go and register.

But the other boy didn’t trust the authorities to keep their promise to process his claim to asylum in the UK, where he has family. He was worried that if he gave his fingerprints and then had to cross illegally, he would be deported back to France if caught.

It's my dream to reach the UK. If I get there my life will be perfect

Another minor, Rahima, a 17-year-old girl in a pink jumper, a tartan scarf around her head, had tried many times to cross illegally to the UK, walking for hours alongside groups of men at night to reach the trucks and try to stow away. Several times, she was sprayed with tear gas by police and sent back to the Jungle.

She left her family in the Oromo region of Ethiopia, where crackdowns by security forces have left hundreds dead, and had lived in the camp for three months.

She hasn’t spoken to her mother since leaving, and her 22-year-old brother has recently been arrested. She would rather return to Ethiopia than stay in France, having slept rough on the streets of Paris for a month and endured harsh treatment by the police, she says.

“It’s my dream to reach the UK,” she said. “If I get there my life will be perfect.”

Despite the demolition already underway, after his last attempt to register Idris made his way back through the camp, bypassing burning tents, the air clogged with heavy black smoke. Inside his tent, he sat on an old mattress and flicked through a copybook a volunteer had given him once, with simple words in French and English jotted down.

His closest friend in the camp, Muzemel Adam, who he had known back home in his city of Al Fasher, had already registered and was staying in one of the white containers in a gated area of the camp. He got his wristband on Tuesday. Idris joked that he was a “big bambino” and that he should trade places, being a year older. Adam also has a brother in England, living in Sunderland.

“So happy,” says Adam, convinced that within a few weeks he will be with his brother. “I will do my interview and then go to the UK.”

They talk about how they will meet up once in England and go to football matches together. But Idris is worried about his only close friend in the camp leaving soon.

WATCH: What comes after the Calais Jungle?

He showed a ring his mother had given him, and an amulet on a string around his neck, which he hopes will keep him safe. Adam also had a ring from his mother, a dull silver band with the Nike logo in the middle. This was all they had brought from home.

Both loyal supporters of Chelsea, back in Darfur they would watch their local team Merreikh El-Fasher play.

But around their city, armed fighting often erupted, and in the past few months there were reports of chemical weapons used by the government on civilians in nearby areas.

They both had brothers in the UK, so had set out individually to join them there, hoping for a better future. When they get there, they have big dreams of becoming professional football players in England.

By the end of Wednesday night, the smoke still rising from the charred remains of the camp, Idris had finally managed to get into one of the containers to sleep, helped by a volunteer.

The container camp is now filled to capacity, housing a reported 1,500 unaccompanied minors. Though authorities say the Jungle has been cleared, volunteers say nearly 100 young people still slept rough in the camp that night.

Even with the temporary shelter, Idris is still uncertain how he will make it to the UK, wondering whether he will have to camp out somewhere else and try riskier measures to cross the channel. 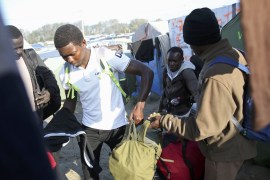 Hundreds are evacuated as French workers protected by police start dismantling the huge camp on second day of operation.