Srinagar, Indian-administered Kashmir –  When Kashmir erupted into protests on July 9, over the killing of rebel fighter Burhan Wani, ambulances began ferrying critically injured people to Srinagar’s SMHS Hospital. Intended only for transportation and with no life-support systems on board, they often carried as many as four patients. By the time they reached the hospital, some had already died; others were clinging to life. The hospital had never before witnessed such a rush.

An army of volunteers arrived to help, unloading  the wounded from the ambulances, putting them on stretchers and rushing them to operating theatres.

Irshad Bashir, 20, a business administration student from Srinagar, came with his friends. Eleven weeks later, they were still volunteering at the hospiral, preparing soup for the patients and their families at one of several volunteer camps set up on the premises.

“On the first day we could only offer water to people,” he said. “[The] next day we collected money and bought some juice. But we wanted to do more.”

As donations poured in, Bashir and his 18 friends formed a fully fledged free kitchen. They named it Shehri Khaas Youth Welfare Relief Camp.

The camp’s daily offering to the patients and staff included tea, lunch at 1.30pm, mutton soup for patients at 6pm followed by dinner for everyone at 7.30pm.

“We have been doing this every day for the past two months. I don’t know how much money we have spent. People came and gave us money, sheep, rice, vegetables – and trust me, we have surplus supplies,” Bashir said.

Behind a makeshift wooden counter, Sajad Ahmad Zaz, a medical representative, explained the dosage of an antibiotic to the mother of a wounded boy. She said that she wouldn’t have been able to afford the medicine had it not been for the volunteers.

Zaz volunteers for Athrout, a local NGO whose name means “helping hand”. It had been difficult for the hospital to provide medicine to the high number of injured, he explained.

People have come together in other ways, too. In villages and towns, community funds have been established to help the needy, while volunteers have opened free schools in homes, mosques and wedding halls.

“It would seem as if someone was organising all of this but no one is. Our past experiences and the repression we have faced have made us into a very cohesive community,” said Nasir Patigaru, who has been teaching at a community school in Anantnag, a town in south Kashmir.

Five such schools have been running there for the past two months and there are scores of others in the villages, he explained.

The community school in Hasanabad, Srinagar, first started at a congregation hall for religious ceremonies, but as the number of students increased it relocated onto the premises of a religious school that had been closed for the past three months. It now has more than 400 students.

Khalid Hussain Dar, 32, is one of the school’s founders. Although he taught students free of charge during the 2008 and 2010 uprisings, this time he and his friends decided to give the effort an institutional form, he explained.

According to Dar, who is a manager at a telecommunications company, of the 15 teachers at the school only a few are university professors, college lecturers or schoolteachers.

“We are educating ourselves while they are busy killing us. This is our effort to arrive at self-sufficiency and that is one of the most important things in the struggle for freedom,” Dar said.

At the compound of Ibrahim mosque in Srinagar’s Bemina area, a group of girls sit inside the adjoining religious school, studying chemistry and discussing conversion of mass into energy.

Their teacher, Tania Ahmad, explained that she quit teaching after she got married two years ago, but when she heard about a community school in the neighbourhood, she wanted to contribute.

“We are all with Azadi [freedom] and we know that in our fight for Azadi we will see hard times, but we must keep education a priority and I think this is an effort toward that,” she said.

The students echoed their teacher’s sentiment.

Nazneen Abid, an eighth-grade student, said that she took part in a protest march for the first time last month. “It was all smoke and tears. My mother fell down when the police fired tear gas canisters into the protest. One of our neighbours was rushed to the hospital. I cried for the rest of the day.”

“We are an organisation of about 60 mosques that are in the Bemina area of Srinagar, and for the past three months we have been making, at each one of our mosques, a ration kit which contains 10kg of rice, one kilo of oil, a kilo or two of lentils and pulses, milk, spices, salt and other such things,” explained Mohammad Shafi Shah, the chairman of the Bemina Coordination Committee.

“That is what a mosque is for, for being not only a place of worship but also a centre which looks after the people.”

But, for the volunteers at the SMHS hospital, things have not been going so well. At the end of September, police reportedly  arrested more than a dozen volunteers and seized two ambulances.

Saqib Bashir, a 17-year-old  volunteer with the Social Reforms Organization, a group that provides free ambulance services, said:  “Two policemen got into our ambulance and asked us to drive to the police station. One of them started hitting me on my head. I pleaded with him that I had done nothing, that I was only helping the people. And he told me that I was being arrested for helping people too much. We were in lockup for the whole day.”

Bashir said that he had earlier been hit by pellets while ferrying patients, and raised his chin to show the scars.

The police deny that they arrested volunteers. “We only seized the ambulances because they did not have the requisite papers. They are lying about the arrests,” Parvez Ahmad, the station house officer of the Shaheed Gunj police station, told Al Jazeera.

But volunteers at the hospital say that on the night of October 2, they were evicted when the police arrived and asked them to vacate the premises within an hour.

The Inspector General of Police Javed Mujtaba told Al Jazeera: “We did not remove them. It is a matter of the civilian and hospital administration, we know nothing about it.”

But the SMHS Hospital’s medical superintendent, Dr Nazir Chowdhary, said:  “It was the police that drove them out. Why would the hospital administration do it?” The volunteers, he says,  were a “great help”.

A day after the volunteers left, the state health minister Bali Bhagat visited the hospital for the first time since the uprising began. As his car pulled into the parking lot, there was no longer free food or medicine for the patients inside. 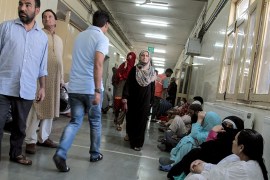