Sittwe, Myanmar – Khine Soe Nwe has spent three sleepless nights at the Sit Key Monastery in Sittwe. Only a bamboo mat separates her from the hard, concrete floor and and an old jumper serves as her pillow. But it is not the crude sleeping arrangement that keeps her awake.

“I can still hear the noise in my head,” she says.

Khine Soe Nwe was cooking at her home in Kan Thar Yar when the village teacher, who was foraging for bamboo, was shot by a man with suspected links to a militant group. “Everybody was screaming,” she says.

Fearful of another attack, Khine Soe Nwe fled her home and sought refuge in the Rakhine state capital Sittwe. She left everything behind, including her husband who is protecting their farmland.

“I don’t know if he is OK because I have not heard from him. I am so sad.” she says, wiping a tear from her cheek.

Three thousand Buddhist Rakhine are believed to have fled their homes after a series of attacks on the border police in Maungdaw township, a predominantly Muslim area on Myanmar’s northwestern border where the majority of the population belong to the stateless Rohingya minority.

Nine officers were killed by a group of men, said to number 250, who fled the bloody scene with a hoard of weapons stolen from the police armoury.

The President’s Office blamed a previously unknown Rohingya group called Aqa Mul Mujahidin for the attacks. The statement released by the office said: “They persuade the young people using religious extremism, and they have financial support from outside.”

On a recent visit to India, however, State Councillor Aung San Suu Kyi urged caution over the certainty of those claims, saying: “We don’t know the full details … That is just information from just one source, we can’t take it for granted that it’s absolutely correct.”

Start of a new conflict?

With the government short of answers, the displaced Rakhine have had to draw their own dangerous conclusions. They say this is not the work of an isolated group but the start of another bloody, sectarian conflict.

“Almost all the people there are Muslim and they hate Rakhine people. If we return, we will all become victims by their hand,” says Khine Soe Nwe.

Little is known about the fate of Maungdaw’s Rohingya population, who are prohibited from leaving the area. Humanitarian organisations say as many as 15,000 have been displaced by an ongoing counter-insurgency operation, launched by the military more than a week ago.

But with the township on complete lockdown, hard facts are difficult to come by and activists fear the true effect of the military operation is yet to emerge.

“We have a lot of concerns about what is happening in the North near Maungdaw,” says Chris Leya from the Arakan Project, an advocacy group with a network of sources across the township. “In the first week [of the operation] we know the army were burning villages, burning houses, shooting people on sight, looting and arresting people too.

“We have also had a report of a number of women who have been raped in one village. We are not sure how many women yet, but between 10 and 30,” she says.

Nearly 120,000 Rohingya already live in internally displaced people (IDP) camps after a wave of inter-religious violence engulfed Rakhine State in 2012, leaving 100 dead. The largest camps are found on the outskirts of Sittwe, but the state capital does not offer Rohingya IDPs the same security as the Buddhist Rakhine who have fled Maungdaw.

For the past four years, Abdu Jolil has fished off the Sittwe coast with relative freedom, despite living in the Baw Du Pha IDP camp. He is the captain of his ship, commanding a crew of eight Rohingya fishermen.

Following the attacks in Maungdaw, Abdu’s ship was restricted to a small area close to the shore. “We could not even feed one family with that catch,” he says.

Last week, police officers at the Thae Chaung checkpoint gave Abdu written permission to fish further out on the Andaman sea. “We had just pulled in the nets and were taking a rest when the Myanmar navy arrived on our boat and they had six Burmese or Rakhine people with them,” he says.

He and his crew were bound with rope and beaten viciously with wooden sticks. As he describes the attack Abdu clutches his left arm which, raised above his head, bore the brunt of the attack. His wife treated the wounds with thanaka, a soothing paste made from the bark of a tree, but it has cracked under the midday heat, revealing the mosaic of bruises beneath.

“I’m really scared that they are going to come back and cause more trouble for us because they took our pictures and wrote down our names,” he says, trembling in shock.

Humanitarian assistance to the Rohingya IDPs was temporarily suspended after the attacks in Maungdaw. Aid organisations are slowing resuming their services but NGO staff confirmed to Al Jazeera that most schools and health centres remain closed as the staff, many of whom are ethnic Rakhine, are scared of entering the camp.

The displaced Rohingya vehemently deny any knowledge or involvement in the attacks. “What the government is saying to the international community and to Myanmar is not true. There are no rebels entering into the camps or into Maungdaw,” says Maung Maung.

With humanitarian crises developing side by side, rumours of unfair aid distribution are fuelling suspicions between the Rohingya and Rakhine communities.

“The NGOs only support the Bengali people,” says Rakhine camp chairman U Soe Naing, referring to the Rohingya with a term used to imply they are illegal immigrants from neighbouring Bangladesh. “If their IDPs get WFP rations, why don’t we.”

Similar accusations are echoed only a few kilometres away in the camps populated by the Rohingya. “We are dying because we are not getting our food rations … The government is starving us by blocking our aid,” says Kyaw Tin.

According to WFP, the regional government turned down their offer to assist the Rakhine IDPs sheltering in Sittwe as the monasteries already have ample supplies. “We stand ready to assist them,” said Innocent Sauti, WFP’s Programme Policy Officer in Sittwe, who is assessing the situation regularly.

There was a four-day delay in the delivery of food rations to Rohingya IDPs living in Zone One, an area that covers Kyauktaw, Minbya and Mrauk-U townships, while WFP waited for a security escort. All other camps, including those on the outskirts of Sittwe, received their monthly rations on time.

“We are concerned about the negative publicity that we are getting, we are not getting involved in the politics … WFP is committed to giving people food irrespective of their background or religion. We give food depending on their need,” said Sauti. “These statements could have a major impact for us.”

With the armed assailants still at large, the threat of intercommunal violence looms large over Rakhine State. And with rumour replacing fact, the prospect of meaningful reconciliation is also getting harder to achieve.

For Khine Soe Nwe, who is settling down for another sleepless night at Sit Key monastery, there is only one thing she wants confirmed. “I just want to know if my husband is OK.” 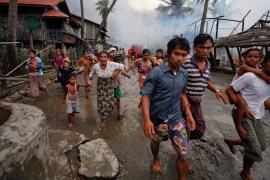