Mexico City, Mexico – The altar has fresh candles, the flowers are immaculately presented, the organ is placed discreetly to one side, while a lectern stands to the other. The reverend is putting on his raiment in the sacristy while a packed congregation waits in their Sunday best for the service to start.

It could be just about any church around the world. But at a closer look, visitors can see the Jesus icon above the altar with a large rainbow haloed around him.

Rainbows are a big deal in the church. They are in the wall hangings, painted above a dove, draped around the ceiling. When Reverend Alejandro Gonzalez emerges, his robe is also embroidered with one.

The church located in a backstreet in the lower-middle-class district of Azcapotzalco, Mexico City, is called the Church of Reconciliation. The writing outside its door says it all: ‘God loves you, just as you are’.

It provides a place of worship and acceptance for LGBT believers in the capital city – although it is open to people of all sexual orientations.

“The church has an inclusive vision of God based on the message of Jesus. When he came to the world, many people were excluded from the church, from the presence of God,” Gonzalez told Al Jazeera. “Our church took Jesus’s message when it started to say to sexually diverse communities: ‘God is your God; he loves you as you are.'”

The church, founded 35 years ago, has survived threats, graffiti, even dead chickens left outside. But today, it is packed for a wedding.

Mario Mendez, the bridegroom, is at home getting ready for his big day. He’s a strong Catholic believer and shares his apartment with hundreds of angel statues.

His partner, Mario Fuentes, finally arrives wearing a matching blue suit. Their story is simple. Eight years ago, they met on a city bus and later realised they live in the same set of apartment blocks. Now they are inseparable and everyone in the neighbourhood simply calls them “The Marios” as they walk their two dogs together every day.

In The Church of Reconciliation, Fuentes and Mendez have finally found a place for what they consider their real wedding, although they have already officially tied the knot in a civil ceremony.

They are not allowed to hold the ceremony in the Catholic Church – of which they are both fervent adherents – especially now amid a controversial time for same-sex marriage in Mexico.

In May this year, President Pena Nieto presented a landmark initiative to change the constitution and allow same-sex marriage in the entirety of the country. It is legal in Mexico City and some other jurisdictions.

This provoked a furious reaction from several religious and civil society groups, including the Catholic Church. Tens of thousands marched across the country in protest against the initiative.

Mexico is a socially conservative country in which a 2010 census found that almost 90 percent of the population defined themselves as Catholic.

Rodrigo Ivan Cortes Jimenez, spokesman for The National Family Front, told Al Jazeera that marriage should be for procreation and as the basis of a heterosexual family.

In the face of that opposition, Mexico’s congress shelved the president’s initiative, saying they had more important things to discuss.

Despite the current obstacles, however, Fuentes thinks that attitudes towards homosexuality in Mexico are slowly changing. “In the ’80s, when we were young men, it was really bad, violent. They wouldn’t let us be; we were worried to go to a nightclub. Now, we have laws so they can’t discriminate against us. I applaud the authorities for doing that.”

The parents of Fuentes and Mendez, all now in their 70s and 80s, are representative of these changing attitudes. Mendez’ mother, Teresa, remembers the moment her son came out to her.

“He told me to get ready, that he was going to tell me a secret, that he was gay. I told him I was disappointed because my other children had made families.” But gradually she came round to the idea of him being in a relationship with a man.

“I’m very happy because now they’re together and won’t be alone,” she said. In a highly emotional moment, she and Fuentes’ parents gave the couple their blessing on the wedding day.

When “The Marios” finally arrived at the Church of Reconciliation after a scenic limousine ride, it was packed with their families.

The ceremony is not legally binding, but it holds much symbolism and emotion. The couple exchanged vows, rings and tearfully sang to each other a ballad from legendary Mexican singer, Pedro Infante.

Then it was time to move on to tequila and dancing with the family at the wedding reception party.

Surrounded by their families and friends, they cut the wedding cake and told about their double honeymoon, first to Veracruz, then to Paris.

“It is what it is,” Fuentes’ father said as he blessed them. “Happiness comes first.” 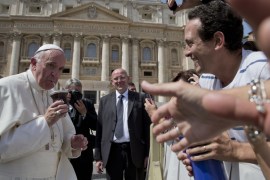 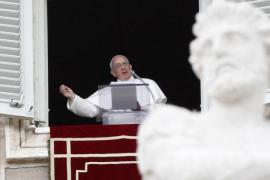 The Vatican and women: Beyond sex, lies and scandals

Although the new Pope is seen as a reformer, equality for women clearly isn’t on the agenda.