England, United Kingdom – Journalist Kerry-Anne Mendoza’s idea for a news start-up began like many others: a vision of disrupting the status quo and challenging narratives others were not questioning.

Unlike other fledgling news outlets, however, Mendoza’s publication, The Canary, quickly established itself as one of the most successful new media outlets in the UK, attracting both a loyal readership and a considerable number of detractors.

Established with just £1,000 ($1,280) in seed money last September, by July this year the website garnered more than 7.5 million monthly page views and has generated a yearly revenue of $321,000. That same month it broke into the top 100 news sites in the United Kingdom in terms of visits, and in doing so, The Canary leapfrogged well-established online magazines such as the New Statesman and The Spectator.

“In short, we have succeeded editorially and commercially,” Mendoza, who is now The Canary’s editor-in-chief, told Al Jazeera.

The feat had been accomplished without “external funding, shareholders, connections, or venture capital”, she added, further explaining the website’s appeal.  “We wanted to create a new media site which was written in a human voice, that anyone could feel a part of – it wouldn’t be all dry, academic headlines and verbose content,” the editor-in-chief said.

“We felt that was a big missing element required for any new media outlet which was going to make an impact outside the echo chamber.”

But it would be rash to put The Canary’s popularity purely down to its colloquial and blunt-speaking style. The website carries a strong leftward tilt in its coverage and many of its supporters see it as redressing perceived mainstream media bias towards left-wing movements in the UK.

A casual Twitter search reveals that endorsements of The Canary and Novara – another left-leaning independent outlet – are often coupled with expressions of antipathy towards established outlets.

“No thanks – I’ll catch up with [The Canary] and [Novara] – not your Tory propaganda,” said one user,  responding to a plug for a TV show by a BBC News producer.

“As [BBC Newsnight] has become the #bluepeter of News. Your former viewers have grown up. We read [The Canary] …,”  said another.

Accusations of bias aimed at media outlets have always been plentiful, but researchers at the London School of Economics (LSE) have published a study which they say demonstrates overwhelming negative coverage of Labour Party leader Jeremy Corbyn since he took helm of the organisation last year.

The paper [PDF], published in July, said that while left-wing leaders were most commonly the targets of antagonistic media coverage, “in the case of Corbyn, the degree of antagonism and hatred from part of the media has arguably reached new heights”.

WATCH: Speaking truth to power – Journalism in a post-fact era

LSE’s Bart Cammaerts, one of the authors of the study, told Al Jazeera that it was difficult to tell whether such reporting represented increasing distrust of the media, but high levels of distrust exist regardless.

“Survey after survey demonstrates that between 75 and 80 percent of the British electorate does not trust their media or journalists. Only a mere 20-25 percent of people believe that journalists tell the truth. This is highly problematic in a democracy and this is something journalists should address,” Cammaerts said.

It is within this context of disenchantment with mainstream outlets that Mendoza believes The Canary is drawing an audience.

“Our success is based on a hunger: The thing we wanted to create was also something people were hungry to see created,” she said. “We hold power to account, and when we are wrong, we say so – and we learn. We have a great relationship with our readership, and we respect them.”

However, while its audience has rapidly grown, so has criticism of the site, with some accusing it of biased and sensationalist reporting.

“Nothing in The Canary is [true], but it makes a great echo chamber for the far left,” said one critic on Twitter.

“The Canary is sensationalist gutter journalism, pure and simple,” said another.

Veteran left-wing columnist Sunny Hundal told Al Jazeera he welcomed new voices in the British media scene, but had concerns about how such outlets could negatively affect political discourse.

“As someone who launched a group blog nearly 10 years ago to offer alternatives to the right-wing press, I think the more voices the better. There is clearly a demand for alt-media voices, as these two [The Canary and Novara] have shown,” Hundal said.

“I’m not worried about their impact on the general media landscape; the right-wing press has featured barmy hard-right voices for decades, after all.

“I’m more worried about how they distort the debate within certain circles. Alt-media frequently become too narrow in outlook, too ideologically driven and misleading to readers. They want to keep publishing stories their readers like, rather than also challenge them, as a responsible media outlet should do.

The New Statesman’s deputy editor, Helen Lewis, said that there was a market for news organisations that supported Corbyn, and that The Canary was filling a gap, but she questioned the appeal many found in such organisations.

“I do find it intriguing that some on the left accuse the UK media of being biased against Jeremy Corbyn, and then choose to read news sources that are biased in his favour. That suggests their problem is not bias, per se, but its direction,” Lewis said.

The criticisms by Lewis and Hundal are on the softer end of what The Canary has previously received. The right-leaning Telegraph’s sketchwriter Michael Deacon described the site as the “the maddest left-wing website in the world” in a scathing piece.

“If this is a spoof, it’s brilliant. But if it isn’t, it’s even better,” Deacon’s assessment concluded.

For Mendoza, such reactions are expected and reflective of a media class out of touch with ordinary Britons.

“The mainstream media has become its own class. Our media is 94 percent white, 86 percent university-educated, over 30 percent London-based, with public school attendees vastly over-represented,” Mendoza said

“They are a painfully narrow slice of Britain – and this makes them incapable of representing the issues of wider Britain.

Hostility against The Canary and other similar outlets stemmed from a fear of new media, Mendoza said, further accusing parts of the established media class of bullying those who expressed “opinions outside their narrow window of permitted discourse”.

“We arrived with the express intention of disrupting the status quo. That’s exactly what we’ve done.” 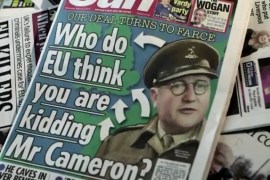 Did the UK media help make Brexit a reality?

Has the tone of UK media coverage shifted since the EU referendum? Plus, the coverage of solitary confinement in the US.