Baltimore, United States – Marvin “Doc” Cheatham is on a mission. He has been sitting outside the elementary school in the Matthew Henson neighbourhood since early morning, hoping to register new voters and convince them they can bring change.

This neighbourhood desperately needs it. There have been ten murders in a year – in an area so small that you can see one end of it from the other. All were related to drugs.

On top of the violence, this almost exclusively African-American district also has high rates of crime and drug abuse, school dropouts, teen pregnancies, unemployment and poverty.

Many houses have been abandoned, with weeds growing wild outside.

“There are a lot of good people here, but the bad overwrites the good. But if I didn’t think we could make change, I wouldn’t be doing this,” Cheatham says, pointing at voter registration forms on a table in front of him.

Rattling off a list of organisations he has been president of, including the local election board and the Baltimore branch of the National Association for the Advancement of Colored People, the 66-year-old, born and raised in Matthew Henson, describes himself as a “civil rights freak”.

When he heard that a majority of eligible voters in the neighbourhood were not registered, he decided to put his retirement on hold and spring back into action as a voting campaigner.

His car is loaded with black and white posters of civil rights activists who changed the course of history in the 1960s and before. He brings them along to events to educate younger members of the community who may not know about those who fought segregation and for voting rights.

“Are you registered to vote, sister?” he shouts out to a passer-by.

“Since I was 18, and now I’m 48,” she responds, but comes over to get a registration form for her daughter. “I always tell people that if they don’t vote, they can’t sit around and complain,” she says, drawing applause from Cheatham.

Though few people in the US know of the Matthew Henson neighbourhood, one of its former residents recently became famous for all the wrong reasons. Freddie Gray, who died in hospital from spinal injuries he suffered during an arrest by Baltimore police, grew up here.

His death last year sparked days of trouble in Baltimore, with clashes breaking out between frustrated black youths and police. Several buildings in Matthew Henson were destroyed.

Cheatham, who seems to know almost everyone who passes him on the street, is trying to channel that anger and frustration into civic engagement.

Campaigning for people to vote is something he has done since he reached voting age, and community activism runs in his blood, his parents both having been activists.

He talks about how 30-35 years ago, a black person not registered to vote was practically unheard of, as voting was seen as a “badge of honour” after the struggle for universal voting rights.

Cheatham interrupts himself, standing up and looking over to a car stopping in the street: “I have to make sure they’re not selling drugs over there.”

As police rarely patrol this area, someone has to keep an eye on things, he argues, saying he is well aware that interfering in someone else’s business around here could end badly for him.

Satisifed nothing nefarious is happening, Cheatham goes on to explain how some 20,000 felons in Baltimore, who can now vote after new legislation came into force earlier this year, are part of his voting drive. Many of that number live in Matthew Henson.

One of them, turning up at the school to register, is James Oliver, 24. He says the biggest motivation for him to vote is his dislike for the Republican party candidate, Donald Trump.

“I really don’t like the way he is talking, about building a wall and about women,” he says. “He wouldn’t represent the country well.”

With the state of Maryland, which Baltimore is a part of, being small and having voted Democrat since 1992, the presidential vote will not be decided here.

But as well as a president, residents are electing a senator, members of congress, a mayor, and other city officials and judges. And it is at that local level Cheatham thinks change can be made by electing politicians who put people first. Before money and prestige, he says.

“If you think this is an awful place, you have to bring in someone who you think can help you,” he says, grabbing a chocolate-chip cookie for lunch.

One shop a stone’s throw from the school has been robbed twice in a year, and a 22-year-old was shot nearby in broad daylight in December.

Nine of the men killed in Matthew Henson since last October were black, the tenth one a white man coming from outside to buy drugs.

“A white person would come here for two reasons: either to work at the school, or to buy drugs,” Cheatham says.

He points down the street: “There you see guys doing what young men here do all day. They have no jobs, so they’re walking around, either up to no good, or about to get up to no good.”

Beyond election season, Cheatham is involved in myriad initiatives: training people how to dispense medication that can save lives from heroin overdose, cleaning up informal rubbish dumps springing up around the neighbourhood, and others.

He meets a group of city officials in a street with mainly boarded-up properties and, after giving them a list of 18 places in urgent need of cleaning, he walks the bravest of the officials through an alley of abandoned houses and piles of rubbish, with rats so comfortable that they do not budge as the people approach.

While he describes the neighbourhood’s future as “challenging”, Cheatham still has hope.

“There is a God above and he helps those who help themselves,” he says. “I think that I was put here to lead those organisations, that was my calling. To help other people. We have to come together and help each other.” 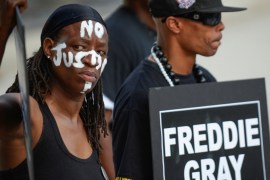