Doha, Qatar – Dia Azzawi, the 77-year old Iraqi pioneer of modern Arab art, has described his latest major exhibition as a “manifesto” against the great theft from the Iraq Museum after the US invasion in 2003.

Azzawi’s art reflects the destruction Iraq has witnessed, especially in the post-Saddam Hussein years, and much of it is now on display across two locations covering 9,000 square metres in Doha. The exhibition housed at Mathaf and Al Riwaq is titled: “I am the cry, who will give voice to me?”

“The [US] invasion buried Iraq, in a sense,” he told Al Jazeera.

Hours into the invasion 13 years ago, the national museum became the victim of the biggest museum theft in history, lasting 36 hours and disappearing tens of thousands of relics, including from the Mesopotamian civilisation.

“Nobody knows what happened to those pieces,” said Azzawi. “This [exhibition] is representing some pieces which disappeared …They [US forces] allowed all these people [thieves] to do what they want, get what they want.”

Since the theft, around 5,000 pieces have been recovered – some in the UK and US.

“The destruction of any antiquities, it’s a crime,” said Azzawi. A crime not against the Iraqis only, against humanity – this [art] belongs to humanity, it doesn’t belong to Iraq only.

“This is my manifesto against what happened to Iraq in 2003.”

Azzawi’s exhibition in the Qatari capital features hundreds of his works spanning 50 years’ worth of drawings, books, and sculptures.

“Mission of Destruction” is among the large-scale paintings and a response, he said, to the devastation suffered by Iraqis.

The impact of conflict is a prominent theme throughout, felt by not only Iraqis but also Palestinians.

His depiction of the Sabra and Shatila massacre in 1982 that saw thousands killed in a refugee camp in Beirut was acquired years ago by the Tate Museum. Now on display in Doha, it is a reminder of the ongoing atrocities around the world. 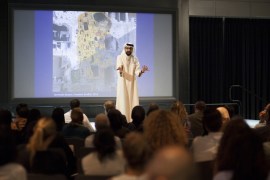 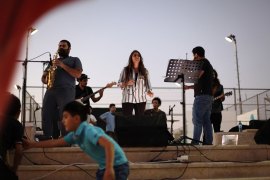 Curator and artist Cai asks ‘What About the Art?’ in major contemporary Chinese art exhibition in the Middle East.