Russia announced it would hold Syria ceasefire talks with the United States and regional powers this weekend – the first meeting since Washington froze bilateral negotiations after an intensified onslaught was launched on the city.

In a statement released on Wednesday, Russia said Foreign Minister Sergey Lavrov and US Secretary of State John Kerry had agreed to hold talks aimed at “creating the conditions for the resolution of the Syrian crisis” in Lausanne, Switzerland on Saturday, alongside top diplomats from “key countries in the region”.

In an interview with a US broadcaster, Lavrov said the talks would include Turkey, Saudi Arabia and possibly Qatar.

“We would like to have a meeting in this narrow format, to have a businesslike discussion, not another General Assembly-like debate,” he said.

A US State Department source confirmed the meeting to AFP news agency.

The annoucement came as Syrian and Russian warplanes pounded rebel-held Aleppo. Medical sources said more than 80 people had been killed in the barrage.

The new discussions come as tensions between Moscow and the West have spiked over the five-year Syrian conflict, after peace efforts unravelled and the intense bombing campaign was unleashed on war-ravaged Aleppo.

“Obviously the missing components are the opposition … or anyone representing the government in Damascus,” Al Jazeera’s Rory Challands reported from Moscow. “The opposition will most likely decry this as a great power powwow and won’t approve.”

International aid groups and UN agencies have appealed for a halt to the violence to allow relief supplies in. No assistance has entered Aleppo since July, while hospitals and rescue vehicles have all come under attack.

Over the weekend, Russia blocked a UN Security Council resolution proposed by France and Spain on ending the hostilities in the war-torn country, blaming Paris for the refusal to discuss a compromise version.

Russian President Vladimir Putin on Wednesday said his diplomats had made it clear they wanted the resolution amended, and the only reason for France to push it through was “to exacerbate the situation and whip up an anti-Russia hysteria”.

Western governments said the veto showed Moscow had no interest in halting the violence. 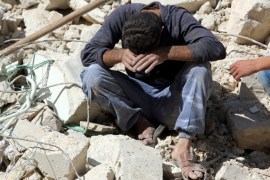 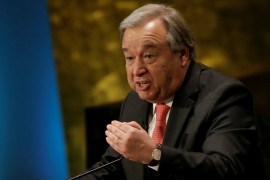 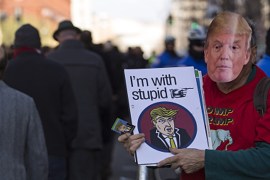