Songeziwe Nqoshela, 28, has no alternative but to sleep on the floor of the cramped single-bedded hostel room she shares with her parents, two sisters and son in Cape Town’s suburban township of Langa.

The local authorities recently fixed a row of damaged toilets that had been abandoned inside a neighbouring building and which are used by the hostel’s residents, but failed to fit doors, leaving those using them exposed to passers-by.

In a quest for privacy, Songeziwe says locals recycled old doors and painted planks to cover the entrance to each of the cubicles.

“The most difficult thing about living in one of Langa’s hostels is the lack of privacy [and] the cramp[ed] conditions,” Songeziwe reflects, “as well as the health and safety issues.”

Aside from the “unhygienic” toilets, residents also have to put up with a sewage system that, Songeziwe says, sometimes leaves sewage outside the building. “The accommodation in Langa is terrible, to say the least,” she sighs.

And Songeziwe isn’t the only resident of the Western Cape province’s hostels who feels this way. A recent protest in Langa highlighted the anger many feel about the lack of progress in improving housing conditions in the region.

When the Native Urban Areas Act of 1923 was passed in South Africa – making it obligatory for African residents to reside in designated locations – Langa was established after the removal of black people from Ndabeni. The township was officially opened in 1927.

In the Xhosa language, “langa” means “sun”. But the town, situated on the Cape Flats, also gained its name from Hlubi Chief Langalibalele, who rebelled against the Natal government in 1875, becoming one of the first black activists to be sent to the island jail which would later imprison figures such as Nelson Mandela.

During apartheid, hostels were built in suburban townships as single-room dormitories to house migrant workers who had a permit to work in the city but did not have permanent settlement rights.

But more than 20 years after apartheid ended, those who are still living in them say that improvements in housing conditions are long overdue.

Ashraf Hendricks is a photojournalist who witnessed the protests. He estimates that around 1,000 people were involved. “[I] saw about six arrests, but local media confirmed 18,” he says.

The pre-planned protest began at around midnight and continued until 5pm the following day. It was dubbed #LangaShutdown on social media.

Photographs of a train and post office that were set alight during the protest circulated on social media and in local new agencies.

“Trains up and down the country have been disrupted by broken railways. The post office was also burnt,” says Sivuile Lusizi, a protester who lives in one of Langa’s hostels. “Protesters broke shops, so all of the shops are now closed. Protestors were throwing stones at police … We started everything.”

But according to Hembela, the protest was peaceful before the arrival of security forces.

“We started a peaceful march in Langa. But police tried to disturb us by shooting rubber bullets at us and tear-gassing us. Then things turned violent. People retaliated,” he says.

Al Jazeera was unable to reach anybody at the Cape Town and Langa police forces for comment on these allegations. But Councillor Benedicta van Minnen, the city’s mayoral committee member for human settlements, said in a recent statement that the protests in Langa were violent from the outset.

“The City of Cape Town condemns in the strongest possible terms the violent protests in Langa which are affecting the lives of law-abiding residents in the area, as well as commuters … This scale of violence and destructive behaviour will simply not be tolerated,” she said.

According to a spokesperson for the Western Cape government, efforts to improve housing in Cape Town have “been ongoing for years”.

But the Hostel Transformation project in Langa, launched under the Human Settlements Directorate’s Community Residential Unit (CRU) programme, began in 2014. It is part of an effort by the City of Cape Town’s council to eradicate apartheid-era hostels.

According to the South African government, the CRU programme “aims to facilitate the provision of secure, stable rental tenure for lower-income individuals” who are “unable to enter the formal private rental and social housing market”. And Councillor van Minnen says the benefits of the scheme can already be seen. In a recent statement, she explained that some of the hostels in Langa have been converted into family units.

“To date, 463 families who were living in the new flats and special quarters hostels and in the Siyahlala informal settlement in Langa have benefited from this redress programme and moved into their homes in December 2015.”

She says the city plans to develop 1,300 CRUs in Langa over the next five years, but that the protesters are “essentially asking the city to prioritise their interests ahead of others in a similar situation”.

But just who benefits when from the housing upgrades seems to be troubling many locals.

“Some people get the houses and they rent them out,” says Songeziwe. “Residents that don’t have houses become very frustrated because they are taking a house for granted. It is corrupt, definitely.”

As the oldest existing suburb established before apartheid, with the longest standing settlements, many in Langa feel that they should be prioritised.

“There are developments happening around Langa but not inside Langa Zones, which are the oldest zones. We discovered the government is neglecting us and the people in the hostels,” says Hembela.

Marianne Millstein, a senior researcher at the Norwegian Institute for Urban and Regional Research and Oslo and Akershus University College, has conducted research in Cape Town since 2000 and describes a situation where “class and race still overlap so that these townships and informal settlements are populated by [the] so-called coloured and black African population” who continue to endure poor living standards.

“Cape Town struggles with a backlog of circa 345,000 houses. These are households defined mainly by three different housing challenges: informal settlements, backyard dwellers, which are households renting informal structures built in the backyards of formal houses, and families living in overcrowded conditions in formal housing,” she says.

Factors such as in-migration, where residents move and settle within different parts of South Africa, and natural growth have placed an additional pressure on existing housing facilities in Cape Town, as well as on other services such as water and sanitation.

According to Millstein, Langa struggles with “bad-quality” housing and hostels, overcrowding and the mushrooming of informal dwellings and settlements in and around its borders.

And she sounds a note of caution about development programmes, using the example of Joe Slovo, an informal Langa settlement named after the politician and opponent of apartheid. In 2004, it was selected for upgrades as part of a large government housing project called N2 Gateway. The upgrade required residents to be temporarily relocated to Delft, a suburban township on the eastern border of the city’s airport. But as the authorities could not build as densely as the original settlements, many were unable to return and were, instead, moved elsewhere.

“While this gave many informal dwellers a house, it also removed them further away from their work opportunities, families, and schools … so this was a very contested process,” Millstein explains.

But the problems are not limited to Langa’s hostels.

According to Milstein, policy papers issued by the city of Cape Town in 2011 show that about 20.5 percent of Langa’s population live in either informal settlements (13.5 percent) or backyard structures (7 percent).

The main difference between the hostels and the shacks, says Songeziwe, is that the hostels are “fire-proof”.

“When it comes to shacks, they can easily catch fire. They are easy to get into and are made of zinc and wood. The material is less durable. They are like Wendy houses,” she explains.

Hembela believes that the City of Cape Town is tactically building housing around Langa to hide its shack settlements. “The government is building double-storey housing along the highways to hide Langa housing and hostels,” he says.

In response, Van Minnen says: “Housing opportunities are built in accordance with the availability of land and hence, the availability and nature of the land also determines the particular location of a development.”

That doesn’t convince Sivuyili, who asks: “How can someone have a nice house, but others are left in hostels?”

Hembela, meanwhile, says that there will be more protests if the government doesn’t tell the protesters “exactly when” their housing will be improved. 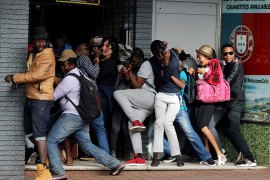 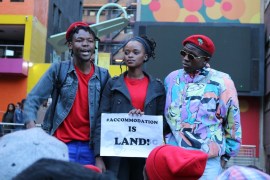 From the homeless to those participating in a SleepOut event, young South Africans share their views on their country.