Maine, United States  – The drive from Rockland to Warren, two small towns located in southern Maine, is an idyllic one: a pastoral, small-town setting typical of rural Americana. It is, therefore, difficult to imagine that past the white wood-panelled houses, American flags and broad green fields lies Maine State Prison, the state’s only maximum-security correctional facility, and home to just over 900 inmates.

Maine is one of only  two states in the country, the other being Vermont, where felons can vote while in prison, and it is a law of which many native Mainers are proud.

According to the Institute for Criminal Policy Research, America  has the second-highest prison population rate in the world , with 698 prisoners for every 100,000 members of the general population.

T he total number of individuals incarcerated in federal or state prisons currently stands at just under 1.5 million , out of which only 3,897 (the combined prison population of Maine and Vermont), have the right to vote while incarcerated.

In the US, individual states determine legislation on a felon’s right to vote. While some states allow voting upon completion of a prison sentence, others remove the prisoners’ enfranchisement for life . As a result, a total of 5.58 million Americans are prohibited from voting, according to a report by The Sentencing Project, a Washington-based research and advocacy organisation. This number includes former felons who have completed sentences but are still prohibited from voting, those on parole and probation, as well as individuals who are currently incarcerated.

Randall A Liberty, Maine State Prison’s warden, told Al Jazeera that inmates should not be denied the vote “regardless of their offence”.

“It’s a basic American right to be able to vote for your elected officials,” he says.

However, not everyone agrees that incarcerated felons should retain their enfranchisement.

Roger Clegg, president of the Center for Equal Opportunity, a conservative think-tank based in Virginia says: “If you’re not willing to follow the law, you can’t demand the right to make the law for everyone else – which is what you do when you vote.”

In the afternoon, it is recreation time for the inmates at the Maine State Prison. A basketball game is taking place in the Prison’s indoor gym. Just off the corridor, in a small grey room, Foster Bates displays the posters he has made to encourage his inmates to register to vote. “Don’t waste this opportunity. Come and exercise your right to vote,” the posters read.

Later this month, inmates will be provided with voter registration cards, which will be mailed to the Maine Division of Elections by inmate volunteers, like Bates. On voting day, a polling station will be set up in the Prison’s chapel.

Bates, 49, a college graduate and once-hopeful basketball player has been in prison for the past 15 years.  He was convicted of murder and gross sexual assault in 2001 – of which he claims he is innocent.

“I’m still a citizen of this country,” says the father of five. “When I got incarcerated, they didn’t say I’d lost my citizenship. I was born and raised in this country, so our Constitution gives us the absolute right to vote.”

Bates is the president of the Prison’s branch of the National Association for the Advancement of Colored People (NAACP), an organisation that works to remove political, social and economic barriers of racial discrimination across the United States. The organisation is working to register hundreds of thousands of African American voters ahead of the November elections.

Michael Tausek, deputy warden at Maine State Prison, says that whereas prisons have traditionally been about punishment, his facility is trying to “embed” what he calls “a culture of transformation and change”, and having the ability to vote is part of that transformation.

He says some prisoners have completed that “crossover” and have begun “thinking about what it means to have a better life”.

“It does not just mean no incarceration or police involvement,” Tausek says. “It also means being civically active.”

Kevin Collins, 56, has been incarcerated at the Maine prison since 2010, when he was given a 15-year sentence for drug trafficking, theft, and burglary. C ollins is currently taking college classes via a programme between the prison and the University of Maine – college professors visit the inmates and give them live classes.

He told Al Jazeera that he is always keeping track of news surrounding the election campaign.

“I don’t think you should stereotype someone because they are a prisoner and deprive them of their right to vote,” he says. “I have plenty of time on my hands to read the newspaper. I’m very informed … and probably have more of a perspective than many.”

Collins says the number one thing he’s looking for in a president is the ability to provide jobs: “I’m going to get out of here one day, and I want to be able to compete with someone who isn’t a felon.”

Collins adds that criminal justice reform is a key issue – he wants the new administration to deliver more lenient prison sentences for nonviolent crimes, such as substance abuse.

In many states, leaving prison means one’s enfranchisement is automatically restored. However, in Florida, Kentucky, Iowa and Virginia, once convicted, an individual’s right to vote is lost forever, even after completing a court-ordered sentence.

In  Alabama , if convicted of a violent crime – which includes murder, rape, sexual abuse and treason – one’s right to vote is removed for life. In  Florida , felons must wait for up to 7 years after the completion of a prison sentence, probation or parole before being allowed to apply to have their enfranchisement restored.

In January 2011 Virginia-resident, Tammie Hagen-Noey, 51, was issued a 10-year suspended sentence for the possession of narcotics. Instead of serving time in a traditional prison, she was recommended to a drug treatment programme, which she completed in 2013. Tammie entered society again, with one caveat: She couldn’t vote.

The state of Virginia made headlines in August when the Governor Terry McAuliffe restored the voting rights to 13,000 convicted felons after an embattled struggle with the state’s Republican establishment and Supreme Court.

“I believe in second chances,” the governor had said at a press conference at the Virginia Civil Rights Memorial. “I am not content to condemn [former felons] for eternity as inferior second-class citizens.”

However, due to the long legal process involved in reinstating voting rights, Tammie is still waiting for the governor to grant her clemency.

“It feels like I am less of a class of a person in the eyes of the government,” she says of her disenfranchisement. “My ability to have a voice … has nothing to do with my past.”

Despite the uncertainty about her own vote, Tammie has been working hard to help others in a similar situation register.”

Laws like these, “really shut people out” says Denise Lieberman, senior attorney at the Advancement Project, an advocacy organisation working to create greater equality for voters. “These are people who have fully served their debt to society and they are not allowed to regain the basic rights of citizenship. That has the effect of rendering these individuals as second-class citizens.”

Virginia’s prison rules have unfairly affected African Americans, which make up over 60 percent of the state’s prison population, according to a  report by the Justice Policy Institute.

The report claims that for every white person incarcerated in Virginia, six African Americans are behind bars, meaning that just over 20 percent of “African American Virginians have lost the right to vote, isolating them from their communities and civic participation”.

“They’ve made a mistake, they’ve committed a criminal act, and they’ve been sentenced for it, so do we want, as a nation, to … just lower the volume of their voices so they can’t be heard?” Tausek told Al Jazeera. Tausek says that the number of incarcerated prisoners who would actually vote is small “they’re not going to sway an election” he says, “but I think it’s important for them to be heard”.

Speaking more broadly about both current and former prisoners, Marc Mauer, executive director at the Sentencing Project, says they would absolutely have influence.

He referenced the election race in 2000 between then-President George W Bush and then-Democratic nominee Al Gore when Bush won the vote in Florida by 537 votes. At that time, says Mauer, there were 600,000 former felons who were unable to vote.

Across state lines in neighbouring Vermont, Chris Barton, restorative systems administrator at the Vermont Department of Corrections, says the motivating factors for prisoners to vote are the same as for those on the outside: “Civic mindedness and wanting to be part of the democratic process”.

Back in the small grey interview room, Bates considers different designs for his election posters. He thinks states that prohibit prisoner voting need to “get in line with Maine”, which he believes is upholding the federal constitution.

“We are still part of … society. There are going to be days when everyone goes home, back to their communities. If you deny their right to vote, how can they be productive?”

Bates agrees. Being incarcerated has given him time to reflect on this matter. “You can find things to better yourself while you’re here,” he says; and being part of a democratic process supports that. 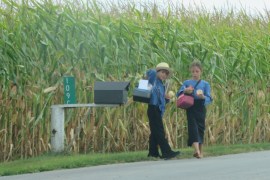 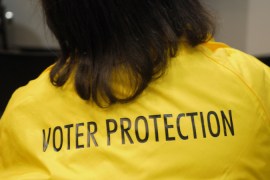 Fault Lines examines accusations that new voting laws are effectively disenfranchising communities of colour in the US.