Brest, Belarus –  At noon each day, the small, echoing arrivals hall of the Soviet-era train station in the Belarusian city of Brest is lined with people waiting to meet relatives who have been turned away from the border with Poland.

“We do not know if they made it,” says an elderly Chechen woman waiting with her daughter as she watches the wooden arrivals doors. Like many others at the train station, her family has been divided as some members have attempted to cross into Poland.

Of the hundreds who attempt the crossing each day, only one or two families are typically permitted to enter. Though there is no consensus on what the official figures are, Human Constanta, a human rights initiative based in Belarus, estimates that 600 people attempt the crossing daily.

The atmosphere at the station is a combination of anxiety and resignation – between the desperate hope that family members will have made the crossing and the expectation that they will have been turned away.

Some of the Chechen asylum seekers, who say they are fleeing political persecution by the Chechen government of Ramzan Kadyrov, have been stranded in the western Belarusian city for days, others for weeks or months. Many say they have repeatedly attempted to enter the European Union.

Of the dozens who spoke to Al Jazeera, those wanting to cross into Poland say Polish border guards are denying their requests for asylum, or even entry into the country if they lack a “valid visa or residence permit” for Poland.

A group of young Chechen men reach into their backpacks to show the written rejections.

“On a daily basis, we board the train to Terespol. A maximum of three families get to Poland,” says one who did not want to give his name for fear of retaliation from the Chechen government. Travelling with his wife and children, he added: “We tell the border guards we want to apply for asylum, but they call us terrorists.”

Abdullah, a Chechen who spoke to Al Jazeera on condition of anonymity, wears a surgical mask in Brest to hide his identity from employees of Kadyrov’s security apparatus whom he believes are looking for those fleeing the country.

A former employee of the Kadyrov government, Abdullah says he was beaten twice by the authorities in Grozny for refusing to join Chechen volunteers fighting alongside Moscow-backed rebels in Ukraine’s breakaway regions and for giving information to human rights groups. He is convinced that remaining in Brest presents an increasing danger to his life.

Before parliamentary elections in Russia this month, Human Rights Watch accused Kadyrov of attempting to build a “tyranny” within Chechnya. A 70-page report entitled Like Walking a Minefield says that the Chechen strongman has used his nearly decade-long tenure to eradicate all forms of criticism and political dissent.

In December 2014, after public threats by Kadyrov’s government to collectively punish and expel the families of rebels from the country, Human Rights Watch received reports of at least six homes being burned to the ground.

Based on the testimonies of 43 people, including journalists, civilians and human rights workers, the report concludes that: “Even the mildest expressions of dissent about the situation in Chechnya or comments contradicting official policies or paradigms, whether expressed openly or in closed groups on social media, or through off-hand comments to a journalist or in a public place, can trigger ruthless reprisals.”

With no desire to return to Chechnya, Abdullah has endured 40 failed crossings in 42 days and has been separated from his wife and children who have already found sanctuary in Belgium.

He says he is committed to finding a way to cross into Poland, even though the pages in his passport and the money in his wallet are steadily depleting.

Under Polish and international law, border guards are obliged to admit asylum seekers for their cases to be reviewed, Rafal Kostrzynski, a representative of the UNHCR agency responsible for refugees in Warsaw, told Al Jazeera.

In response to these allegations, Lieutenant Agnieszka Golias, a press officer from the Polish Border Guard,  says that asylum applications in Poland are “accepted from an alien who clearly declares and expresses his or her willingness to lodge the application. If the alien does not meet the conditions laid down in national law … the alien receives a decision on refusing the entry to Poland.”

Kostrzynski told Al Jazeera: “According to 1951 Refugee Convention and Poland’s national regulations, a person who states that [they need] asylum should be able to seek international protection. We have been receiving calls from foreigners at the border who say that they are not allowed to lodge their asylum applications although they clearly expressed their will to seek protection in Poland,” he said, adding that official statistics reveal an increase in the number of people being denied entry.

“We are concerned that among those who were not admitted, there might have been people in need of international protection.”

The experience of being denied entry to Poland is compounded by the humiliations and challenges many asylum seekers encounter during the process.

“When we are denied entry, we are put in a small room, tens of us,” says Lechi, a Chechen asylum seeker who spoke to Al Jazeera on the condition of anonymity for fear of reprisals from the Chechen government.

“There’s no space to stand, and definitely not to sit. We’re held there for up to five hours, while all the other people from the train are processed, and then we’re released to be able to board the return train from Terespol to Brest.

“The people who end up in the room are the ones travelling alone, without families,” Lechi adds.

The Association for Legal Intervention, a Poland-based research group, described Terespol in an August report, At the Border, as a crossing where large numbers of applications for asylum have been lodged for years, and where “the most applications have been rejected”.

The association’s report documents “alarming information” gathered by its researchers at Terespol, including the “informal measures applied by the border guard comprising initial evaluation of the validity of foreigners’ accounts of persecution”, as well as “refusing entry to Poland to a significant number of people stating they intend to apply for international protection”.

With some attempting and failing the crossing daily, week after week, passports fill up quickly. Those who spoke with Al Jazeera say they believe the practice is meant to force them to leave Brest to apply for new passports in Russia, which issues passports to Chechens.

Responding to this allegation, Golias said that between January and July of 2016, Poland received 115 percent more applications at Terespol from Russian citizens, including Chechens, than in the same period in 2015.

In a statement in August about the country’s intention to deny entry to Chechen asylum seeker, Poland’s Interior Minister Mariusz Blaszczak said: “The Polish border is closed. There is no war in Chechnya at the moment, unlike in the previous years.”

He added that Poland stands “for rendering help to the suffering. We help the people who leave their countries when they are at war, and provide financial support and assistance to refugees in camps.” But the recent influx of Chechens was perceived as “another attempt to create the new migration route, an inflow of Muslims to Europe,” Blaszczak said.

Slava Panasiuk, a representative of Human Constanta, says Poland is “refusing to obey its obligations under international law and European law.

“The refusal of entry to Poland for Chechen asylum seekers appears not to be the initiative of a few officers, but a matter of de facto policy,” he told Al Jazeera in central Brest.

“The result is that Chechens fleeing Kadyrov’s regime face legitimate threats to their wellbeing and security. Our hope is that the EU will use diplomatic means to encourage Poland to reverse this trend.”

Golias from the Polish Border Guard states that Poland last year “issued 53,000 decisions refusing the entry to Poland because of the fact that the entry conditions laid down in the regulations were not fulfilled”.

“Polish Border Guard Service protects [the] external border of the European Union,” says Golias, “and we are aware of the fact that we bear the responsibility for the security not only of Poland but the whole EU”. Some of the asylum seekers who spoke to Al Jazeera confirmed that they intend to continue to other parts of Europe, including Belgium and Germany.

Outside a UN-sponsored children’s hospital in Brest, Jean-Yves Bouchardy, the UN refugee agency representative in Minsk, the capital of Belarus, told Al Jazeera that large numbers of Russians from the Caucasus had already been crossing into Poland and other parts of Europe before he took up his post in 2013. The Caucasus, which includes Dagestan and Ingushetia, as well as Chechnya, have witnessed a “wide range of serious human rights violations,” according to a  Human Rights Watch report that looks into almost two decades of human rights abuses in the region.

Poland received more than 8,000 applications for asylum in 2015, of which some 5,015 were filed by Russian citizens, and 75 percent of those were rejected. Bouchardy encouraged those stranded in the city seeking help from the UN to first apply for asylum in Belarus, a process that he said may be “complicated” due to Minsk’s close ties with Moscow.

This is a concern echoed by Chechens, who believe that the long arm of Kadyrov’s rule extends to Belarus. In July, a 22-year-old Chechen man accused of being a member of a terrorist group was arrested at Brest train station and extradited to Moscow in a joint operation conducted by Russian and Belarusian special forces. Many say they feel no safer in Brest than they would in Grozny, the Chechen capital.

Belarus, a country which has earned the moniker of “Europe’s last dictatorship”, having been ruled for 22 years by President Alexander Lukashenko, has so far made no official response to the arrival of Russian citizens, who do not require a visa to enter Belarus.

Stranded with no way back

The asylum seekers aboard the Terespol-bound trains and those waiting to learn of their fate at the station say their patience and resources are being depleted.

Being stranded in Brest is a considerable financial burden, says Lechi. “Each day, a family of five needs 50 euros [$56] just for the train to the border and back, and that’s before paying for food and accommodation.

“This man who tried to cross 50 times is beginning to lose it,” he says, gesturing to a young Chechen man wearing a baseball cap whose passport has just two remaining pages. “He started drinking. We’re trying get him to stop.

“My brother back home has already been questioned twice about me. [Kadyrov’s government] know I’m here.”

Abbas, also talking on condition of anonymity, is travelling with his wife and children. He sold his home and belongings in Chechnya to finance his journey to the EU.

“Our money has almost run out,” he says. “We’re completely screwed. We will have to sleep in the train station. I don’t know what we will do. There isn’t a way back to Chechnya.” 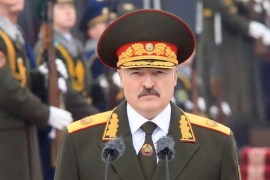 We investigate the state of political freedom in Belarus and President Lukashenko’s unshakable grip on power. 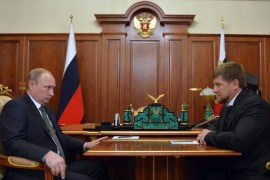 Chechnya: The power of public humiliation

Honour, dignity and freedom have lost their significance under Kadyrov’s rule.