Paris, France – The street in front of the former Charlie Hebdo building is almost empty.

A plaque, placed here on Tuesday January 5, to commemorate the journalists killed inside almost a year ago is being modified. A spelling mistake was spotted earlier in the day; the name of the artist Georges Wolinski had been misspelled as “Wolinsky”. The famous cartoonist was one of the 12 people killed in the attack on the offices of the controversial satirical publication.

A man is re-carving the correct letter on the plaque, which is now hidden behind a canvas cover, as a young woman in a yellow raincoat stares fixedly at the building. Next door, two girls lean out of a window to take in the scene.

One bystander, 56-year-old Isabelle, on holiday with her husband, had travelled all the way to Paris from La Reunion island, a French territory in the Indian Ocean. “It’s important for us to come here,” she said. “We live 10,000km from here, but we are French! And the emotion is still there.”

The January 7, 2015 attack on the Charlie Hebdo offices began a three-day killing spree that also claimed the lives of police officers and shoppers at a kosher supermarket.

A few days later, on January 11, an estimated 3.7 million people, including world leaders, marched through the streets of Paris, and other cities around the world, in an act of solidarity with the journalists and the people of France.

French President Francois Hollande claimed that the “spirit of January 11” had united the French people.

But much has changed since that moment.

French politicians approved a sweeping new surveillance law, 130 people were killed in a series of coordinated attacks on November 13, changes to the French constitution have been proposed, which could, among other things, see French-born dual nationals convicted of terrorism, stripped of their French citizenship, and the country is in the middle of a state of emergency.

“My daughter is seven years old and all this year she has been asking a lot of questions. So I bought the memorial edition of Charlie Hebdo – this issue of the survivors – last year, as a symbol, as an explanation for her, for me,” said 42-year-old Chimene.

After her shift as a Metro station agent, she takes a break at a Cuban cafe in the 11th arrondissement of Paris, where the November attacks took place. At the beginning of the year, she liked this “spirit of January 11”, she explained, but confided that it had quickly disappeared.

“No stories of unity any more,” she said between sips of coffee on the covered terrace.

For 27-year-old Guillaume, the unity does not really matter any more. What he wants above all is to protect his family.

“In Paris, I am careful about everything. Yes, I’m scared,” he said while chain-smoking and chatting with his girlfriend, Hortense. He lives in Creil, a far off Paris suburb that is home to a large number of migrants. He is not opposed to the new measures, to the state of emergency or to people being stripped of their citizenship if this will bring greater security.

Hortense nodded in agreement. The measures implemented are “extreme, but we are in an extreme situation,” she said.

Anger on the streets of Paris

Eighteen-year-old Helene and Gabrielle are medical students in Paris. Gabrielle is Muslim. Her father migrated to France from Iran when he was only 14 years old. She stands strongly against the measures that would strip people of their citizenship, but said that she does not feel as though she is stigmatised as a French Muslim.

Helene added that although they are aware such “ridiculous” Islamophobia does exist, they do not blame the French politicians for it – just as they don’t blame them for the attacks.

“Politicians are doing their best, it is not their fault,” said Helene, jokingly adding that she is more concerned about all the hard work she must do to complete her studies.

In front of the former Charlie Hebdo building, TV journalists did not seen to know what to film.

When a reporter for France 5, part of the French public television network, tried to speak to a middle-aged man who was passing by, he responded angrily, accusing the journalists of being disrespectful.

The reporter turned and slowly moved away, her commemoration issue of Charlie Hebdo, which was to be released the next day, tucked under her arm. 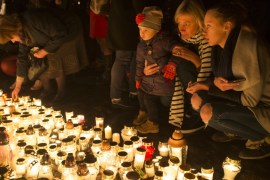