Thimphu, Bhutan – Surrounded by portraits of her country’s present and former kings, 14-year-old Chimi Wangmo is sitting hunched over a game of snakes and ladders. A stack of cards will test her on her country’s recent democratic transition. If she gets the answer right, up the ladder she goes. If she gets it wrong, then it’s down the snake’s tail.

Among other questions, the cards ask who Bhutan’s first female minister was and how many national assembly constituencies there are in the country.

Chimi was only six when her country moved from an absolute monarchy to a constitutional democracy – making her’s the first generation to grow up with an elected prime minister. More than eight years later, she is learning what this political reconfiguration means to her. And, like most Bhutanese, she still loves her king.

“Both the democracy and the king are important for our country,” she says. “The government will know about our problems and try and solve them. If the government is a bad one, then the king will punish them.”

Yangchen Gatshel Lower Secondary school, where Chimi studies, is a bone-rattling 40-minute ride from Thimphu along a circuitous road, which seems to disappear in parts. The sprawling campus sits on a mountain’s edge, and offers sweeping views of the valley below. There are few buildings in its vicinity – and the area is better known for a nearby jail.

Although remote, Yangchen Gatshel is one of the 153 schools in Bhutan that has a democracy club. Chimi is a member.

Bhutan’s election commission first started setting up democracy clubs in schools in 2013, with the aim of helping young Bhutanese understand the inner workings of a democracy. More than 50 percent of Bhutan’s population – 370,000 people – is under the age of 25, making this a crucial demographic if the country’s democratic experiment is to succeed.

A parliament for children

This week, Bhutan’s first children’s parliament is meeting for the first time. Comprising 63 members of democracy clubs who were elected in national polls last September, the parliament will debate national issues much like a real parliament.

The children received training in a number of areas – including how to run clean elections and public speaking skills – during the last week of December.

The idea, says Bhutan’s election commissioner, Deki Pema, is to have a children’s parliament which is as close to a mirror image of the national parliament as possible.

Even the constituencies that the children are elected to represent are the same as the parliamentary constituencies, she explains. “We want them to become familiar with the boundaries and also how the constituencies play out, and what are the implications, delimitations. These become clearer as you live through them.”

The elections to the children’s parliament were far from child’s play: the election commission put in place the same apparatus it uses for parliamentary elections – electronic voting machines, election officers, campaigning. Held at a cost of nearly $22,000, the elections saw a 98.22 percent voter turnout.

The children’s parliament won’t have a prime minister and parties. But the members will be able to submit the proceedings of their parliament to the speaker of the national assembly, the prime minister, the opposition leaders and other senior officials. This, elected officials say, will help frame policy in parliament.

“We have three sources for moving the motions in the parliament – the government, private and individual bills. Now, we will have the fourth source,” says Lyonpo Jigme Zangpo, the speaker of the national assembly, which has been providing the election commission with technical support to set up the children’s parliament.

Learning about democratic systems assumes additional significance in Bhutan, which has been famously isolated from the rest of the world.

It joined the UN in 1971, but doesn’t have formal diplomatic ties with any member of the Security Council – making it the only country other than Iran and North Korea with no formal ties with the United States.

One-sixth the size of the UK, the Himalayan nation first started receiving foreign tourists in the 1970s, and even then, their numbers were kept low because of a prohibitive daily fee that was charged. The Bhutanese began to tune into Baywatch and other popular TV shows in 1999. And the country got its first Internet cafe in 2000 – but has since made rapid progress, with nearly a third of the country connected to the world wide web by 2014.

Unlike many other countries in the developing world, which fought for democracy, Bhutan was handed a new system of governance by its monarch, who said a leader shouldn’t be “chosen by birth instead of merit“. The king began devolving his power in 1998, setting the ground for the first parliamentary elections in 2008.

But, says South Asia expert SD Muni, Bhutan’s democracy is still very “guided” and the king continues to be seen as “the entire core and centre” of political activity.

What the young want

About 14km away from Chimi’s school, a group of 12th grader democracy club members sit around the same game of snakes and ladders. Their school, Kelki Higher Secondary School, is Bhutan’s private high school, and is in the heart of Thimphu city. Located only 3km from the national parliament, many of its pupils can’t wait to influence the legislative process.

Kinley Payma, the school’s literary captain, says she wants to speak up for students from rural areas. “In villages, students often have no hostels. They stay in huts, living almost far away from school because we have mountainous topography in our country,” she explains. If I am elected to the children’s parliament, I can raise a voice for equal facilities for both rural and urban students – because both deserve them.”

Many pupils feel that the government needs to do much more for them. Though education levels in the country are high – primary education enrolment has been steadily going up – unemployment rates among those aged between 15 and 24 are a cause for concern. Substance abuse among the young remains a persistent problem.

Another Kelki school democracy club member – who is also called Kinley – says he wants to become a member of the children’s parliament in order to shine a spotlight on some of the issues facing young Bhutanese – the “government lacks interest in youth”, he says.

“I feel that the Bhutanese youth has a lot of capacity and abilities that are not yet explored compared to young people in other, developed countries,” he adds.

Kinley’s classmate, Karma Tobden Dorji, agrees. “Our grown ups – the ones who are actually running for politics right now – I think they are being very unrealistic. They promise a lot of things but they aren’t able to do them at the end of the day.”

These democracy club members were not always so articulate about what they expected of their elected representatives. Just a few months ago, many of them had a tough time differentiating between the head of the government and the head of state, says their teacher Sonam Tshering, who is the club’s democracy coordinator. “But now the students are coming to know what democracy is all about.”

Although more than 79 percent of the Bhutanese electorate came out to vote in 2008 – some in remote areas where yaks carried voting machines – many didn’t welcome the change.

“People didn’t want democracy and the king had to force us to have democracy,” Bhutan’s current prime minister, Tshering Tobgay, recently said.

Two elections later, people aren’t necessarily happier with a democracy. “Most people feel that their fears have come to bear,” Tobgay said. And despite the best efforts of the election commission to help children appreciate democracy, not all subscribe to it.

Karma Tobden Dorji, of Kelki School, thinks that democracy was a “very unnecessary step” taken by the king. “Our country had been surviving till then with the monarchs, and I think people were very happy with how things were. Nobody needed change, actually.”

Nitasha Kaul, of the University of Westminster, in London, who has studied Bhutan’s transition closely, points out that “life was better in undemocratic Bhutan than it is in many democracies”. Many in Bhutan, she says, do not distinguish in nuanced, modern ways between sacred and secular sources of power.

Who rules the world?

Like many in her school, Chimi comes from a semi-literate family. She hopes to become a doctor when she grows up, but she dreams of being elected to the children’s parliament first.

“I’d like to bring attention to the problems that children face, especially girls. Some of my friends have faced sexual harassment, and some didn’t get a chance to study at school. I want to solve their problems.”

According to Bhutan’s famous national happiness index, the country’s women are less happy than its men. There is also a high incidence of domestic violence in the country – with many women apparently believing that their partner is justified in hitting them for burning food or refusing sex.

Young girls like Chimi are talking about using democracy to change this.

“Why do men think that they are the only ones who can rule the world? We can also rule the world,” says Kinley Payma, of Kelki school.

The trafficking of young women is what bothers Kinley Payma most. “I often see news that girls staying on border areas have disappeared. Maybe they are kidnapped. Maybe they are sold as prostitutes. We don’t know. So I want to find these missing girls – then stand on behalf of them and raise a voice.”

If the number of girls joining democracy clubs and the children’s parliament is anything to go by, more girls are considering a future in politics. But there are only three elected female members of Bhutan’s current parliament – down from seven elected members in 2008. With 18 girls and 45 boys, the children’s parliament has done better on gender representation. There are also more girls in school democracy clubs than boys – 2,249 girls to 1,958 boys.

And although their grasp of democracy may not be perfect or complete, many of these girls are helping their parents understand that the Bhutan they grew up in is changing.

“Ultimately, they convey this message to their parents. So, … I feel … the children are the best communicators to the illiterate parents,” says Tshering Womling, Chimi’s school principal.

Shaheen Nilofer of UNICEF Bhutan, which is working with both the school-based democracy clubs and the children’s parliament, says that such democracy education initiatives are helping with nation-building.

“Young people need to be made aware of their role as future leaders, the nation’s aspirations for them and also be educated on the broad policies and directions taken by the government,” says Nilofer.

And, there is yet another sign that the democracy club experiment may be working: children are beginning to question and express themselves to the adults who make the rules for them at school.

“They come and ask, ‘Why are these rules there?’ Which means this exercise has made them think,” says Karma Zangmo, the principal of Kelki school.

“So I have to then explain to them why we have made the rules. While doing this, I also feel, okay, the next time I will have to ask the students about the rules we make because they concern them.” 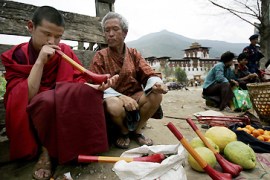 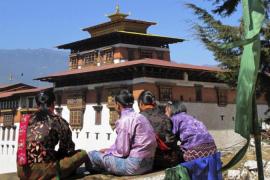 Many in the “Land of the Thunder Dragon” are excited about Tuesday’s polls, but some hanker for return to monarchy.