New Delhi, India – It’s one of the first sights you’ll see when driving away from the airport in New Delhi.

Men, women, and sometimes even children, walk through traffic at the red light, waving books, toys, and car chargers at you.

There’s a lot of variety around the city when it comes to street vendors – on the road, sidewalk, or in front of and between the alleys of regular markets.

You can get the latest magazines, new and classic books (some of them aren’t even bootleg), cigarettes, Delhi’s famous street food (not recommended for foreigners, and even some locals), as well as seasonal items such as Santa hats for Christmas.

And they’re pretty timely too. Two days after Michael Jackson died in June 2009, I saw street vendors selling his “Greatest Hits CDs” at a red light.

Sitting in front of a metro station with a large tray of costume earrings, bracelets and rings, Kushma Singh has been a street vendor in Delhi for four years, helping to support her family.

She says it doesn’t help getting pushed around a lot.

“The security guards from the metro station mall keep coming and kicking us out from this spot.”

IN PICTURES: The hardships of Delhi’s street vendors

As with most, Singh doesn’t know much about the Delhi government’s plan to regulate street vendors such as her. But she worries what little she makes will soon be taken from her.

“If they take all this it’ll be terrible for my family,” she says. “We won’t be able to make ends meet. My children will be out in the streets and probably fall in with wrong crowd.”

India’s capital is home to anywhere from 300,000 to 400,000 street vendors of all types – many with little or no regulation from city authorities.

In November, Delhi’s High Court ordered the state government to submit a clear policy on regulating the vendors, and rehabilitating others by helping them find other work.

Details of the policy have not been released, but the street vendors association says the last proposed policy discriminated against them by imposing heavy fines and threatened to ban vendors from cooking.

They worry the new policy won’t be much better.

“They gave five days for public consultation, but two of those days were holidays because of Christmas,” says Anurang Shankar of the National Association of Street Vendors – a trade union with 700,000 members across India, 150,000 of whom are in Delhi.

He says despite him meeting top officials, street vendors have not been properly consulted on their concerns.

“They even issued a public ad asking the public opinion about it. Why not asking about the opinion of the street vendors?” he exclaims.

Some also believe the benefits of having street vendors in a city as large as Delhi are being overlooked.

“See that food cart near those metro workers there,” he says, pointing to a group of construction workers, building the city’s metro system.

“It’s the only place for them to get food in this area. He is providing those people a needed service. Otherwise he wouldn’t be here. He’d move elsewhere if there was no business.”

Roy adds that street vendors should be looked at as shopkeepers or small businesses – a vital link in the business chain.

“One is the need of a customer who wants cheap, affordable, inexpensive, necessary stuff. And the other is a producer, who’s making this stuff and selling it out. And it’s a huge clientele, it’s a mass clientele.”

One question is whether any policy can really be enforced on hundreds of thousands of street vendors, spread across nearly 1,500 square kilometres of the National Capital Territory under the Delhi government.

Even if some are eventually rehabilitated as planned, there are thousands of migrants coming into the city every month, many of whom will take up street vending for their livelihood.

Without the details of the policy being released, street vendors are wondering what will happen to them. 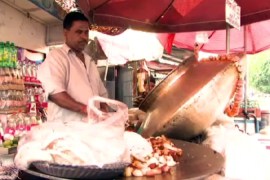 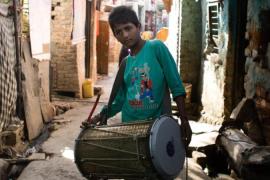 Artists say plans to bulldoze celebrated colony where they live could leave them homeless and damage Indian culture. 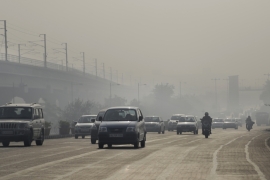