Altar, Mexico – One single road cuts through drowsy Altar, an hour’s drive south of the American border at Sasabe, Arizona. At first glance, the town seems a sleepy outpost. But this look is deceiving.

Foot soldiers of the drug cartels, young, tough-looking men on bikes, patrol the blocks. Men in pick-up trucks with fully tinted windows and no licence plates drive up and down the one main road menacingly.

A migrant pulls his jacket over his head and trots into a shop. But his attempt to make himself invisible is of little use. No one gets in – or out – of Altar without the permission of the cartels.

“You can’t trust anyone here,” says Juan, a 38-year-old migrant who hopes to find work in the US. He is a widower and father of six children from the southern Mexican state of Chiapas, staying at a church-run shelter for migrants. The shelter offers a safe place to stay and a meal for migrants who’ve undertaken a difficult and dangerous journey.

After the US tightened border security controls following the September 11, 2001 attacks, Altar was transformed into a hub for migrants seeking to enter the country illegally through remote desert routes.

In this small town the shops, exclusively geared towards migrants, offer everything from “coyotes” – as the human traffickers here are known – to camouflage, sand-coloured clothing and anti-snakebite kits.

But these days, the little town plaza is no longer crowded. Local authorities and shop owners say up to 3,000 people once arrived here every day from all over the world in the hope of reaching their American dream.

Today, however, the flow of people is reduced significantly. Yet everyone here agrees that dangers lurk at every corner for the few migrants who take the risk to travel through this town.

The drug cartels, locally referred to as “la mafia”, control an extensive network of human traffickers and informants. They extort for money, kidnap and kill migrants at will. The locals think they have infiltrated the local branches of the police and government structures.

The ongoing conflict over trafficking routes between two rival factions of the  Sinaloa cartel,  “Los Memos” and “Los Salazar”, means that there is increased competition over the migrants that do arrive.

Pay or be killed

To cross the Sasabe desert and go on to Arizona, migrants are told they must pay about $4,500 to the coyote, who is appointed by the cartels. They are also forced to pay an additional $700 in a separate “tax” to the criminal groups themselves.

At the church-run shelter, there were rumours that the week before, two Honduran migrants were murdered after they took the fatal decision to embark on the journey north without paying.

Juan, the migrant from the south of Mexico, is left without any money after his long and perilous journey through the country.

Now he has been offered to get over the border “mochilando” – as a drug mule, carrying a backpack filled with at least 30kg of marijuana.

But Juan is hesitant and well aware of the stories about how migrants are killed once the merchandise is delivered.

“I’m afraid. Every single day I try to come up with something else. But if I don’t send any money home soon, my children will die of hunger,” he says, his eyes filled with tears.

Figures of the number of those apprehended by the US border patrol indicate that fewer and fewer migrants are risking the crossing than in previous years.

According to US Border Control data, from 1983 through 2006, more than one million migrants were detained trying to cross the US-Mexico border. But the number has come down significantly in recent years, with only 337,117 apprehensions in 2015, the lowest since 1971.

Marc Rosenblum, deputy director of the US immigration programme at the Migration Policy Institute, attributed this decrease to the stricter border security policies in the US.

And this decrease is having a significant effect on the small town that depends on the commerce of migrants.

“Pretty much all the stores geared towards the migrants have had to close.The same thing goes for the hotels and flophouses. Almost 60 percent of Altar are without work,” says the newly appointed mayor, Everardo Martínez, from Mexico’s governing party the Institutional Revolutionary Party.

Martínez rejects the notion that Altar is dangerous and that drug cartels still pose a problem here.

“Extortions, kidnappings and killings of migrants are not an issue anymore. It’s something that belongs to the past,” he says.

Prisciliano Peraza, a catholic priest and a well-known activist for migrant rights, laughs at the denial presented by the mayor. “What does he know?” he says. Peraza thinks the mayor is downplaying the influence of the criminal networks because he is involved in them.

“The mayor may have a new job, but he hasn’t given up drug and human trafficking,” Pereza says.

As a part of his routine, Pereza travels around the villages surrounding Altar to conduct weddings, baptisms and religious services for “la mafia” and their loved ones.

He speeds through the unforgiving desert landscape just a few kilometres from the American border in his Chevy pick-up truck every weekend.  “I do this for my own security,” says the priest.

“Although they sell drugs and kill people at will, they’re still concerned about being in the good graces of God,” he says hiding his gaze behind aviator sunglasses and a cowboy hat.

Human trafficking accounts for an increasing part of the income for the cartels.  It is a safer way of making money, according to the priest.

“The sentences are shorter, and no matter what, the migrants will always pay,” Peraza says.

Not afraid of death

“When you know the kind of life you can have in the US, it’s worth risking your life to obtain it,” says Dagoberto, a migrant from Honduras, a country plagued with gang violence.

The 53-year old had already lived in the US twice previously. He has two grown children who live in Washington DC. But, he was deported during his last stay there. This time, he plans to head to Atlanta, Georgia.

He has spent a month and a half traversing Central America and Mexico. He recounts that on his journey, he has been robbed by criminals and has been extorted for money and his clothes by the police.

When the blisters on his feet heal, he will once again try to cross the border. But without money, he may have to take the potentially fatal risk of a backpack stuffed with narcotics on his back.

But he says he does not fear death. 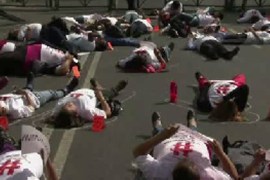 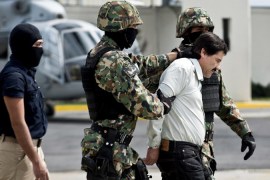