When Papa Mukendi started his business in 2002, the Democratic Republic of Congo was experiencing one of the bloodiest peaks of its more than two-decade-long war.

“There have been moments when the work has multiplied, and we’ve had to hire more staff,” he says.

For this country’s misfortune is his fortune. After all, if there is an industry that prospers in Goma, it is death. And Mukendi’s speciality is coloured coffins.

When business is good, Mukendi sells three a week. When the conflict calms down, days can pass without a sale.

He used to make more money, he says, when he was the only one to envelop the dead in felt and wood. But as the conflict drew on, many carpenters reinvented themselves as coffin makers. For in this land soaked with the blood of the more than 5.4 million killed since 1998, coffins, not furniture, are the luxury on which people will spend their limited money.

“When there’s conflict or a plane crashes, I sell a lot more. I don’t like war, but if it comes I take advantage. It is work, and I welcome it,” laughs Mukendi.

Faida lives near Mukendi’s workshop. A mother of two, she prostitutes herself to the soldiers who frequent a local club called Apollo in order to provide for her sons.

For war not only demands wood for Papa Mukendi’s coffins, it also needs fresh flesh to entertain the troops. Before this conflict, Faida took care of her children and sold traditional crafts to tourists. But since her husband joined an armed group and left her, selling her body has been the only means by which she has been able to support her family.

But the money she earns rarely makes it back home to them.

“We don’t have money to pay for a motor taxi, so we have to walk home,” she explains. “On the way, street kids steal what little we earn, and they rape us.”

When asked whether she has ever been raped, Faida responds: “Many times … many.”

She presides over an association for female prostitutes in Goma. It has 7,500 affiliates.

“It’s tough for us to survive because we are excluded,” she explains. “That’s why we created this association, to protect and advise ourselves. Many women have no schooling, [they] don’t know the dangers they face and the diseases they could contract if they don’t take precautions.”

Prostitution is a prosperous industry thanks to the war. With more than 30 armed groups in the region, there is a growing market of men seeking sex. But with little money, plenty of weapons and ample alcohol, the soldiers often rape and threaten the women.

War is a profitable activity, with many investors – both internally and externally.

The United Nations, for example, sent 19,815 blue helmets to the country through its United Nations Organization Stabilization Mission in the DR Congo (MONUSCO), the second-largest mission in the world. For the home countries of those troops – Pakistan, India, Uruguay, Tanzania, South Africa and Malawi – the mission can be extremely profitable: the UN pays them four times the cost of the deployment.

And the troops are not the only foreigners present. More than 80 humanitarian organisations also ply their trade in the Democratic Republic of Congo, or DRC, as part of an arguably self-sustaining business.

One NGO mission chief, who asked not to be named, confessed: “I don’t know what we’re doing here. Our presence raises the price of food and rent, we stop people from moving on, from taking their own decisions and demanding their government take responsibility. We should have left Congo years ago.”

Another booming industry that thrives off the bullets is the trafficking in blood minerals, for nothing serves this illicit trade better than a failed and unstable state that is incapable of collecting taxes and stopping neighbouring countries from looting its riches through strongman proxies.

Rubaya in the province of Masisi is three hours’ drive from Goma and the epicentre of the blood minerals war.

Our guide, a 16-year-old miner called Inocence, must walk for an hour to reach his post at the largest coltan mine in the country.

“Sometimes the mountain caves in,” he tells us. “The miners are buried for ever and people forget about them.”

As we approach, the sound of thousands of moving souls emerges from the mist. “Do you hear that?” Inocence asks. “That’s the murmur of the mine. It’s close.”

Our path traverses steep hills browned by mud and as we climb higher we encounter our first victim of the day. Several men carry the body of a miner on a makeshift stretcher covered with plastic. “Tell of what happens here. Let it be known,” says one of the group.

In our pockets we carry a sample of what they risk their lives for: a small bag of green powder called manganese, a gold nugget and small dark rocks called columbite and tantalite but better known as coltan, the material the dark heart of this mountain is made of. It is a fistful of sand to die for.

Some tech lobbies, perhaps wishing to wash their hands of any responsibility for the exploitation of blood minerals, recently insisted that coltan is no longer used in the making of mobile phones, tablets, consoles or cameras, and that the mines were closing. But in truth, demand for the mineral is still much greater than its supply. Around 80 percent of the world’s supply resides under Congolese soil.

So around 5,000 miners, many of them children and teenagers, continue to toil in a state of quasi slavery in DRC, at first under the open sky and then, when there is no more of the mineral left on the surface, in deep tunnels where they eat, sleep and work from dawn until dusk, seven days a week, 365 days a year.

Several women follow behind us with boxes of soda and sacks of grain tied to their heads. Once inside the mine, they set up their little torch-lit market so that the miners may buy their wares without abandoning their work.

In worn boots, Inocence moves at military pace. He is much faster than us as we clumsily navigate the mountain that threatens to crumble beneath our feet.

As we arrive at the entrance to the mine, a legion of men turn to examine us with suspicion, some visibly surprised to see whites at the summit. Many work nearly nude, without helmets or protective gear, and some are even barefoot. Others wear fake Real Madrid or Barcelona shirts. The luckiest have rain boots.

“To enter the tunnels you must first ask permission from the mine chief,” Inocence explains, pointing out one of the Congolese foremen.

The same rules that govern the base also seem to apply at the summit: no one prohibits access, but neither do they allow it.

The mines are particularly dangerous during the rainy season, when the damp earth can crumble, leaving miners at the mercy of carbonic gas or crushed inside underground caverns.

“Sometimes we’ve found labourers’ skeletons trapped since who knows when,” explains Francois, one of the foremen.

No one knows for sure how many people die in this mine. One NGO has committed to counting the dead, but so far the number remains a mystery.

“There are days when 30 or 40 people fall,” says Francois. Someone will scratch their names off a list, then hire their replacements.

James lives in the better-off far-west of the country. He drives us to his home, where he chases away the curious and then closes the curtains.

Then he produces a sample of black powder from his pocket for us to check the purity of the ore. The muzungu or “white man” rarely sets foot here unless seeking coltan, gold or manganese.

James tells us that he collects his merchandise from the river, where others who work for a dollar a day clean and separate the ore from the sand. They bring him trays of the treasure, which he then sells on – earning about $2,040 a month.

He maintains that he knows nothing of its purpose, adding: “We have been told that it is used to make casseroles, things for the kitchen.”

Each miner charges about a dollar for 14 hours of work. The foreman earns around 10 percent of the total received by his crew – usually about $14. Then the local strongman will take his cut. And it rarely matters who that strongman is – as the power shifts in the long-running battle to control the mines and minerals, one strongman simply replaces another.

In North Kivu there are between 5,000 and 6,000 Congolese rebels spread among 30 armed groups. In addition to racial hatred, they are motivated by a desire to control the mineral zones – and will massacre entire villages in an effort to do so.

A trafficker who buys the already screened mineral at the foot of the mine will multiply its value when he leaves it at the border with Rwanda or Uganda under cover of darkness. By the time the coltan arrives in the manufacturing districts of Shanghai or Ciudad Juarez in Mexico, its market price is between $476 and $544 a kilo.

But while a dark web of large multinational companies, corrupt officials and unscrupulous states participate in the ancient game of looting the DRC, an increasing number of firms, according to the annual list published by the NGO Raise Hope for Congo, are now meeting protocols designed to ensure that they do not use so-called conflict minerals in their products.

The gold that James, the trafficker, shows us in nugget form has left the quarry near Numbi, the same one controlled for years by Bosco Ntaganda, who is currently on trial for war crimes at The Hague. From the Congo it will probably travel to Dubai; its sale, according to the Enough Project, concealed in Swiss bank accounts. From there it will go to the market, potentially to be used in high-end cosmetic products.

The UN has denounced neighbouring countries such as Rwanda and Uganda for selling a mineral that is not theirs and for feeding armed groups in order to keep the trade alive.

Meanwhile, the developed world receives its sacks of cassiterite, coltan, gold, diamonds, uranium, tungsten and manganese cheaply and promptly. Who then, other than the Congolese themselves, could want a conflict that sustains such a business to end?

This article first appeared in the August 2014 issue of the Al Jazeera Magazine. 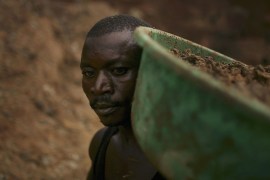 Conflicted: The Fight over Congo’s Minerals

Did a law lobbied for by Western consumers bring peace to miners in eastern Congo or did it instead cause problems? 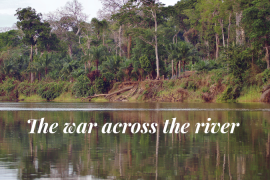