Athens, Greece – Hundreds of Greek gold miners and technical staff are preparing to stage “powerful demonstrations” against the left-wing Syriza government, unions told Al Jazeera. Their employer, Canada’s Eldorado Gold Corporation, announced days ago that it would lay them off and utilise a key mine in northern Greece after years of government obstruction.

“Everyone is against the government, which won’t let us work. This indignation has gone on for a year. Everyone understands that it is this government that stands between our bread and us,” Hatzis said.

Eldorado will dismiss all but a handful of the 688 people working on its Skouries mine in the Kassandra peninsula in northern Greece at the end of the month because, for three years, the Greek government has delayed issuing a building permit for the gold processing plant there. A further 500 workers would have been hired to build the plant.

A second mine at Olympias will also be utilised at the end of March, Eldorado said, if a permit to expand the processing plant there is withheld. That will lead to another 600 job losses.

Although Eldorado’s investment plan and environmental impact assessments have cleared parliament and survived more than a dozen court challenges, it is the quotidian bureaucracy of the government that is bringing the mining giant to its knees.

Eldorado CEO Paul Wright said the company had done all the work that could possibly be done under existing permits.

“We’ve got to the stage where we’re digging holes and filling them in again,” he told Al Jazeera in a private interview. He said the company was still tallying up its cost overruns, but could no longer resist calls from international investors to cut its losses and pull out of Greece.

Wright was in Athens to meet Environment Minister Panos Skourletis, in a last-ditch attempt to smooth over differences. The meeting produced no breakthroughs. “We’re coming from very different places,” Wright said.

Eldorado has invested $700 million in developing Skouries, Olympias and three other concessions in northern Greece over the past eight years. Skouries and Olympias alone hold proven reserves of more than nine million ounces of gold, 72 million ounces of silver, and 767,000 tonnes of copper. Even at today’s depressed prices, the metals are worth more than $13bn.

The company estimates that over the course of the mines’ lifetime, Greece will become Europe’s largest gold producer, with export revenues of $490m a year.

In addition, the Greek economy will absorb $5.8bn in salaries, social security payments and payments to suppliers. Eldorado currently employs 2,000 people and 3,000 contractors.

“I think what we completely missed in Greece was how this investment would become politicised to the extent that it has,” Wright told a packed press conference. “It has unfortunately been treated as a political toy for politicians to play very sick political games, as opposed to an investment being treated on its own merits.”

Eldorado’s announcement seemed to throw the government into a panic. Skourletis called the move “blackmail”.

“The company hasn’t paid a single euro in taxes since 2007,” he told Skai television. Eldorado says that while it has paid no corporate tax because it is posting losses during the mines’ development phase, it has paid over $130m in VAT and social security.

“Some of [those in government] have lost their class consciousness,” Skourletis said of the Labour government, which has alienated the miners it claims to represent.

“The damage is enormous,” he said in his inaugural speech to parliament members. “It goes beyond the local community. It affects the entire country’s image. At a critical time, we’re sending completely the wrong message to whatever investors still believe in this country’s numerous development prospects.”

Greece has been in recession almost continuously for the past eight years, losing a quarter of its economy. Unemployment now stands at 25 percent. “If the Greek economy fails to attract investments worth 100 billion euros [$109bn] over the next 3-5 years, we will never emerge from this recession,” Mitsotakis said.

Deputy head of the European Commission, Valdis Dombrovskis, who oversees the Greek adjustment programme, voiced his concern in an interview with the Greek daily Kathimerini on Friday. “It must be made very clear to the Greek authorities: They need to cultivate a positive business environment,” he said.

Eldorado believes that a vocal anti-mining minority hijacked Syriza when it was looking for a way to flag its environmentalist credentials.

“Syriza was sold a bill of goods,” says Wright. “It wasn’t the anti-mining activists that got Syriza elected. It’s the other way around.”

READ MORE: Greece through the eyes of the homeless

The Skouries mine was again at the centre of a political storm last September. Days before a general election, the Syriza government rescinded a key environmental permit to landscape a tailings deposit there, crippling the project. The permit had been issued in 2011.

Hundreds of miners and their families locked themselves into mineshafts until after the election, when the Council of State, Greece’s supreme administrative court, vindicated Eldorado.

The decision acknowledges “the adoption of the best available techniques in all aspects of the controversial activity [extraction, metallurgical method, waste and water management, dust minimisation, disposal of tailings etc].”

Similar delays and setbacks destroyed Eldorado’s predecessor in Greece. In 2002, TVX Gold was forced to merge with another Canadian miner, Kinross, after sinking a quarter of a billion dollars into Skouries, Olympias and a third mine over seven years. They filed for bankruptcy the following year.

Miners remember the hardship of those layoffs, but they say this time will be worse.

“Back in 2002 there were jobs in cities. Now, there is no work in the urban economy for anyone,” said Hatzis. “The land here is infertile. You can’t go and sow crops and raise cattle. The only real alternative is to leave – not just the area, but the country.”

Eldorado seems determined to avoid the fate of TVX. It manages a dozen mines around the world with a turnover of a billion dollars a year, so it has the stamina to stay in the game; but Olympias and Skouries added value to the company because they were its “key growth projects”. Eldorado’s share price dropped 19 percent following the company’s announcement.

By putting the mines on maintenance, Eldorado is buying time and transferring a political cost to the government.

“We’re here to finish the job. That’s why we came and that’s why we’ll remain,” Wright told journalists. He was prepared to wait, he said, “a very long time”. 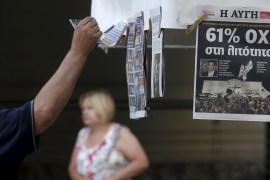 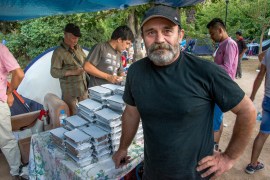 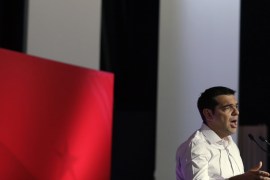