Until last week, the left appeared unchallenged at the helm of Greece. Conservative New Democracy had been at sea since it lost elections to Syriza a year ago and again last September. It bungled a nationwide election for its own party leadership in November, when software failed. In the defeatist atmosphere, a grand coalition with Syriza to push through painful austerity measures seemed probable.

On Sunday, however, the party elected Kyriakos Mitsotakis, a 47-year-old reformist, to lead the party, setting the stage for a confrontation with the ruling leftists, and another turbulent political year in Greece.

“We have but one purpose: For New Democracy to express all those forces that are opposed to the populism of an incompetent government,” Mitsotakis said on Sunday night. The melee of media and supporters in his office exuded the energy of a general election victory.

Mitsotakis’ election has caught Syriza at an especially vulnerable moment. More than 70 percent of Greeks believe that the country deteriorated last year under Syriza, according to a Sunday newspaper survey. More than half believe this year will be worse.

The government has a majority of just only three MPs in parliament. Since capitulating to austerity in July, it has been forced into the same straitjacket of unpopular measures as its socialist and conservative predecessors; but public anger at a mandatory pension reform that would result in a 15 percent cut has presented it with its greatest challenge to date, because Syriza had vowed never to touch pensions.

“The government won’t find a convenient crutch with its social security interventions,” said Mitsotakis during his election campaign. “We will support structural changes. The coming pension cuts are a result of Syriza’s policy.”

In its defence, Syriza has responded. “Mr Mitsotakis seems to express … the hardest neoliberal positions,” a party spokesperson said after his election, “such as the dismissal of state employees – positions which have been rejected by the Greek people.”

As minister of public administration reform, Mitsotakis presided over 5,000 dismissals from the 620,000-strong state payroll in 2014, and introduced worker evaluations. Syriza repealed the evaluation law and rehired everyone who wanted to return.

Mitsotakis’ political gumption brought him admirers as well as enemies. “He stuck to his guns when everybody in the party was against what he was doing,” says Ioannis Leonis, a taxi driver. “That is very uncommon. But will his MPs now rally behind him?”

None of New Democracy’s 75 members of parliament openly declared their support for Mitsotakis during his campaign. Like most Greeks, they expected the winner to be Mitsotakis’ opponent, the interim party chief Evangelos Meimarakis, a sexagenarian former defence minister who is among New Democracy’s dominant populists.

Mitsotakis is aware that he hails from a minority. “Not everyone shouldered the reformist burden of the previous government,” he said on January 5. “Some people stood forward and some stood back in silence.”

Yet he appears determined to go on the offensive. “New Democracy needs a reboot,” he said on the campaign trail.

Mitsotakis was often referred to as the outsider candidate, but he is hardly an outsider to politics. His father served as conservative prime minister. His sister served as mayor of Athens and foreign minister, and lost a bid for the party leadership in 2009.

When Kyriakos’ father, Konstantine, became premier in 1990, the state controlled some 70 percent of the economy.

The elder Mitsotakis embarked on an ambitious privatisation programme. He liberalised banking, air transport and telecommunications. A series of public-private partnership deals created the new Athens airport, the Athens Metro, its ring road and Europe’s largest cable-stayed bridge over the Corinthian Gulf.

The government fell before it could set into motion plans to sell public land and privatise refineries and new power plants.

The younger Mitsotakis has demonstrated the same liberalising and reformist tendencies. But can he win over his party and the people?

“He needs to turn to a different clientele,” says Andreas Andrianopoulos, one of the key reformers in the elder Mitsotakis’ administration. “If he turns with passion to the private sector he might counter-balance the forces within the state that support Syriza. If he doesn’t do this he is lost.”

Not everyone agrees. “If one looks at the ND party, the large majority of its rank and file belongs to the populist and patron-client tradition. If [Mitsotakis] tries to purge all of them he would be risking a break-up of the party,” says George Pagoulatos, who teaches political economy at the Athens University of Economy and Business.

He believes Mitsotakis should “marginalise the populist element … and turn New Democracy into a party whose programme and rhetoric and practice are overwhelmingly reformist, even if it carries along the dead wood of a parochial party mechanism”.

History would seem to bear him out. Socialist party reformists alienated their populists, sending them into the arms of an obscure left-wing party.

In 2009, that party took only 4.6 percent of the vote. Today it is in power. New Democracy is no stranger to fragmentation. Since the 1990s, it has spawned no fewer than seven rivals, the most formidable being Golden Dawn.

Greeks are fatigued with the pace of deceit.

“Is [Mitsotakis] a good thing? I don’t know. We’ll see,” says Maria Thetis, a retired dancer. “We’ve seen so many people in power, including from the Mitsotakis family, and sometimes I think everyone is playing us for fools.”

Much is at stake. Greece got where it is by failing to become a more transparent and meritocratic society. The resulting crisis broke the two-party system and brought more extreme parties into parliament.

If mainstream politicians cannot persuade their own political machines to change, they stand little chance of convincing the nation. 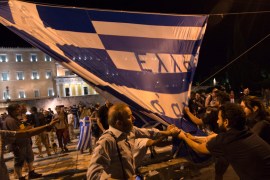 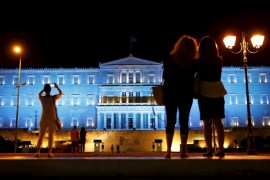 The unbearable lightness of Greek democracy

Greeks have abandoned all hope that their political leaders have the skills to rescue the nation’s economy.