Akre, Iraq – For Hanan, who’s more familiar with conflict than anyone her age should ever be, it’s the chance to create beauty that helps the most. As she daubs red paint onto a green background, the 13-year-old Syrian refugee living in a camp in northern Iraq is thankful that, in her imagination at the very least, peace will one day bloom as vividly as the flowers she’s painting.

Hanan is one of about a dozen other child refugees from Syria participating in the Castle Art Project. Through donated supplies from the Rise Foundation, a local NGO, the kids get a unique outlet – once a week, they get to put aside the stark realities of refugee life and dive into a world of colour and whimsy.

Akre Camp, where the children now reside, is the site of a former prison. Today, the kids aren’t just painting over the bars, they’re also transforming the drab and depressing walls that surround them into a vibrant canvas.

Hanan, who drew and painted even when she was in Syria, explains that when she and her family first fled from the fighting, art no longer provided an escape.

As she continues to paint her portion of this mural, Hanan tells me this has helped tremendously and made her feel much better.

“Before this, we were only thinking about the war when we were in Syria,” she says. “We were drawing tanks and blood. We were drawing ISIL fighters killing people with knives.”

Indeed, when this project first began, most of the artwork produced by the children here mirrored that sentiment.

READ MORE: The orphans of ISIL

Walking around the camp, you can still see some of the older murals – full of sadness at having left Syria, and permeated with fear of a future filled with uncertainty.

In one striking painting, a child sits sad and alone, with the words “We miss our homes” written above him in Arabic.

In another, a dove is depicted, as it tries desperately to fly through the bars of the prison that Syria has become.

Kawther Ahmad, the project’s coordinator and also a refugee from Syria, says volunteers here decided early on they had to do something to help these children process the trauma they’d faced.

She says the first sketches the children did were full of death. They were “all about the war,” Ahmed explains, “the bombs, the schools coming down, the buildings coming down.

“We try to change their mind to encourage them to think about beautiful things, happy things,” so that the children would start drawing “more hopeful, more beautiful” scenes. It’s a form of therapy, she assures me, that is working.

Nowadays, the children are imparting far happier impressions. Recent murals are full of more optimistic motifs and messages. One of the largest reads, “Love Wins”.

But Ahmad, like the other volunteers here, is worried about how much longer the project can exist – as of late, raising funds has become harder, and she insists the children desperately need this outlet.

Today, despite the rain and cold, the children are still enjoying themselves. As they complete painting a big, bright sun rising over the mountains, they laugh and play.

A setting that used to be reminiscent of only dark days is now getting brighter all the time. 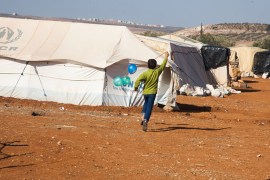 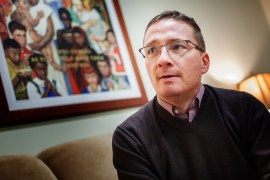 First Unitarian Congregation of Toronto and the Muslim Association of Canada unite to resettle Syrian refugees. 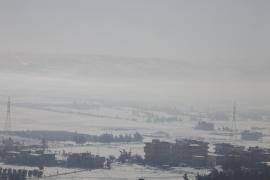