Gaziantep, Turkey – The day I arrive in Gaziantep, the US state department issues an advisory about a potential “terror cell” lurking in the city.

“The information suggests the terrorists are possibly targeting shopping centres, Starbucks, Big Chef Restaurants and/or other businesses catering to western customers,” the advisory notes, calling on foreigners “to exercise caution when patronising these sorts of businesses and to avoid if possible”.

There can be no guarantees of safety anywhere in the world today, least of all along the restive Turkey-Syria border. The tension ebbs and flows, and this week it’s flowing.

Having read this advisory shortly after landing in Gaziantep, I find myself looking over my shoulder at lunch, trying to meet the eyes of each person we pass on the street. Even the most innocent interaction takes on a sharp edge.

Restrictions on reporting in Turkey are tighter than ever since this summer’s failed coup attempt, fellow journalists say. Even after obtaining blanket journalistic accreditation from the government, each appointment – from interviewing residents of a refugee camp to visiting a local school – requires a separate approval form.

Others will not speak with foreign media at all. A woman who runs a community centre in the city declines to meet for an interview about the facility’s art programme “since there are security concerns nowadays in Gaziantep. We do not want to draw attention in these circumstances.”

The next day, news comes through about a suspected explosive device found inside a Gaziantep shopping mall, along with reports on social media that local AK Party facilities may be targeted.

When I tell my Syrian fixer that I feel even more tension here than in war-torn Iraq, his response is immediate: “That’s because Iraq is a war zone. You expect it,” he says. “Here, there’s no war. It looks like a completely normal place. But at any moment, something could explode.”

Indeed, Gaziantep is vibrant, bustling, often beautiful. There is a war across the border in Syria, in addition to Turkey’s ongoing battle against Kurdish rebels throughout the country’s southeast. But along the manicured streetscape of Gaziantep’s old city, the notion of violence feels out of place.

Hours after the “terror cell” advisory is issued, in an unrelated incident, we hear that two rockets have landed in neighbouring Kilis, fired from territory in Syria controlled by the Islamic State of Iraq and the Levant (ISIL, also known as ISIS) group.

We had planned to be in Kilis that day, but plans had changed. We read about the rockets over our lunch of rice and lamb, as photos begin flowing in through social media.

When we arrive back at the hotel that night, a staff member runs a bomb mirror around the bottom of our car. They hadn’t done so the night before, my fixer says.

This is the flow of life in Gaziantep. 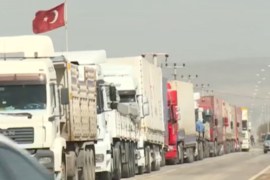