This is a first-person narrative by Bismillah Ranjbar, an Afghan who remembers the 9/11 attacks and the changes they brought to his life.

I was nine when I lost my father in 1994. He was a driver for the International Red Cross hospital in Kabul and the sole breadwinner of the family.

He was killed in a rocket attack on the hospital during the Afghan civil war which lasted between 1992 and 1996. We – my mother, three sisters and two brothers – were left to survive on our own.

We moved to Jaghori district in the Ghazni province, where my oldest sister, Razia, began working as a school teacher. She had helped to pay the cost of our schooling and provided food and shelter through the money she had been earning.

My mother wanted Razia to get married since, in our culture, girls get married very young. But Razia would always refuse and say things like: “I will not get married until my brothers and sisters are the most educated people in the country. I will continue to earn money so they can go to school and then university.”

However, in 1996, when the Taliban took control of the country, we began to face problems with the fact that my sister was working. During the Taliban rule, women were not allowed to work outside their homes.

We were barely surviving, but my sister continued to go to her work at the school even after the Taliban threatened her.

During the five-year rule of the Taliban regime, the Taliban imposed strict interpretations of Islamic law.

I remember how I had always wanted freedom for those girls who yearned to go to school, but couldn’t because it was forbidden. My friends and I used to help girls to get in and out of school buildings discreetly.

I remember the Taliban authorities would not just harass my sister, but would also force my brothers and me to wear turbans. They would measure our beards with a lantern glass to ensure the minimum length of the beard under their interpretation of Islamic law. Anybody who had a beard too short to crop out of the standard lantern glass would be punished with seven lashes and jail for weeks.

OPINION: Death of a warlord will change nothing in Afghanistan

‘I remember the day’

I was in the ninth-grade class of the Faiz Mohammad Katib High School, the same school where my sister Razia was teaching. I remember I had returned home from school and was ready to go outside to play football with my friends.

I was outside, chasing after the ball and tossing it over to my teammates when one of the boys, sitting in the corner of the pitch with a radio in his hand, shouted for our attention.

“The Taliban has attacked the Twin Towers,” he yelled. “They’ve attacked America!”

We ran towards him, gathering in a circle around the radio, not quite understanding nor grasping what he was saying.

We stayed together, standing over the radio and listening to the developments until the evening fell. When it was dark, we each headed home.

On my way, I kept on thinking about how the Taliban had grown so strong to be able to attack the United States, and how this meant that they would probably keep ruling over us with even more force.

“Amma!” I called my mother as I walked through the front door. “The Taliban have attacked America!”

I turned on the radio, anxiously waiting to hear any updates.

That’s when I realised the severity of what was happening: The World Trade Center was attacked.

New York City was in total chaos. People were dying and buildings were on fire.

It also became clear that it wasn’t the Taliban who had attacked the Twin Towers.

I left the radio on for the rest of the night.

In Afghanistan, we had grown so accustomed to bombings and rocket attacks that the events of 9/11, at the time, felt like nothing big.

However, we were unaware that the events of this day would affect our lives for years to come.

A few months after the September attacks, i n December 2001, the United Nations Security Council established the International Security Assistance Force with aims to dismantle al-Qaeda and remove the Taliban from power.

At the news, the Taliban had begun recruiting young men and boys, forcing them to demonstrate against the US invasion. I was among those who was ordered to do the same.

I was not willing to demonstrate against the Americans nor join the fight. Deep down, I wanted my sister to continue working without being threatened by the Taliban. I also thought of my other brothers and sisters; I wanted us to live freely, without any fear.

“I hope they leave,” I used to whisper in my prayers every day. “I hope the Taliban regime ends.”

The end of the Taliban rule

The Taliban regime toppled after the invasion. In 2004, elections were held and Hamid Karzai became Afghanistan’s president.

Life had improved and I began doing really well in school – but all that came with a dear price: Thousands of innocent civilians were killed in the conflicts between the Taliban, the Afghan and international security forces – conflicts that are still going on today.

I got accepted at the political science undergraduate programme at Kabul University in 2005 and graduated three years later.

“I am so proud of you,” Razia said when I got my first job. “You will make it big. Just have hope,” she said.

While we did get an education and find decent jobs, the situation in Afghanistan is still the same.

The country is unstable, although it has been 16 years since the 9/11 attacks. We, as Afghans, are still suffering from the repercussions of that day.

It is still like our 9/11, only it’s been happening to us every day. 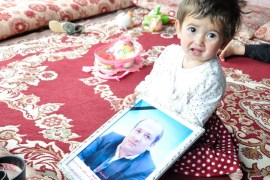