“What a quirky story.”

That was my first thought as I glanced at the photograph of an elderly Indian couple cradling what they described as their “miracle” baby. However, it wasn’t long before I was peering intently at this intriguing family snapshot, my mind bursting with questions.

Why would anyone want to have a baby at 70? How could she possibly have carried it, let alone become pregnant in the first place?

Cartoonish images of knobbly knees and wrinkled thighs trembling under the great weight of a swollen belly flashed into my head.

READ: Inside the world of India’s booming fertility industry

I googled the IVF doctor behind this record-breaking birth. Remarkably, this was not just a one-off case – it was, and is, a phenomenon.

His clinic’s homepage is jam-packed with photographs of beaming elderly parents holding newborns – the youngest mother in his showcase is 62 years old.

Under the headline “Our Achievements”, he pays tribute to his patients:

“We salute those women who endanger their lives when opting for IVF [to become mothers] and getting rid of the stigma of infertility.”

Endangering your life to get rid of a stigma seemed a surprising take on motherhood and raised even more questions about the real story behind these “miracle” babies.

And so, in a quest for answers, an extraordinary journey full of contradictions and complexities began.

The stigma of infertility

Our first stop was Dr Anurag Bishnoi. By now, he was not only world-famous but also the subject of professional condemnation. Labelled unethical, he claimed not to be fazed by the criticism.

He vehemently defended his treatment of post-menopausal women – his catchcry: “If men can have children into their 60s and 70s, why shouldn’t women be able to?”

With the recent news of Mick Jagger siring an eighth child at 73, no doubt similar views have been expressed at dinner tables around the world. But, given the life-threatening risks involved for women in having a baby at such an age, Bishnoi’s critics argue he’s far from being a champion of the feminist cause.

In his more candid moments, mostly off-camera, he seemed genuinely empathetic to the plight of his patients, revealing he found it gut-wrenching to turn away a weeping, childless woman who feared being abandoned by her husband for someone younger and more fertile. Such is the lot of many women in India’s state of Haryana, and they are the lucky ones. Some have even been killed by their husbands.

The price of life: Treating infertility

His detractors, though, have no time for this sentiment. They accuse him of cashing in on the enormous social pressure on Indian women to bear a child.

The fact his patients’ waiting room is chock-a-block every morning, and he owns a theme park with water slides and a multistorey complex that houses a restaurant, bar and electronic games parlour on the outskirts of a relatively poor town, could give some weight to their charge, but it’s not definitive evidence by any means.

Perhaps the most revealing moment came as Bishnoi conducted an exploratory procedure in the operating theatre. As he sat on a low stool, seated between the splayed legs of an anaesthetised woman, he proclaimed: “This is where the world comes from.”

It had an uncomfortable touch of “the creator” about it, and perhaps adds credence to the argument that he’s using science to play God.

But, his patients couldn’t be more delighted with their little creations.

All of them were effusive in their praise for him. They all told how their lives had been bleak and empty and how they’d been ostracised prior to having a baby. None of them had wanted to adopt a child at any stage – they wanted to bear their “own” child.

‘She will never know the identity of her biological mother’

In a country with a rigid caste system, curiously, the caste of the donor egg seemed irrelevant to these couples. Perhaps it’s simply a case of “what you don’t know won’t hurt you”, and why Bishnoi insists details of donors remain secret.

There’s no doubt 78-year-old Rajo Devi Lohan has hit the gene jackpot with her little daughter, Naveen. The eight-year-old is clearly very bright, charismatic and full of energy. She will, however, never know the identity of her biological mother.

In the developed world, we’ve seen the devastating impact on the lives of children born from donor eggs and sperm when information about their biological parents is lost or denied. Laws have been changed to ensure their rights are now looked after.

It seems, though, amid the murky, unregulated world of India’s IVF industry, it will be some time before the rights of the child become a priority. One wonders whether joy will turn to pain as these children grow up. 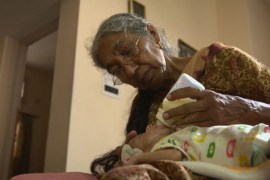 India’s elderly new mothers: Are doctors playing God, or does every woman have the right to bear a child?