When you fly into Phoenix Airport in Arizona, there’s a chance you might arrive at the Barry M Goldwater terminal.

Not many people will instantly know who he is. Back in 1964, Arizona Senator Barry Goldwater was the Republican Party’s presidential hopeful.

Goldwater had many opponents in his own party. They didn’t like him or his message.

Accepting the nomination, Goldwater told delegates that “extremism in the defence of liberty is no vice” and insisted “moderation in the pursuit of justice is no virtue”.

In short, he wasn’t going to pander to his opponents, reconcile and unify. He was going to fight the election on his own terms.

He lost in a landslide.

The ghost of Barry Goldwater hangs over Donald Trump’s campaign.

There are those who wanted Trump to tone down his message on immigration. He was seen as too harsh, too combative.

But that brought confusion. And voters don’t like confusion.

Neither do the surrogates, people who campaign and speak for Trump in the many media outlets around the US.

They weren’t clear what the nominee’s position was on immigration because they weren’t sure themselves.

That is why Trump’s speech on immigration policy here in Phoenix on Wednesday was so important.

It came just hours after he made a trip to Mexico at the invitation of President Enrique Pena Nieto.

It was a huge political gamble. It was hostile territory.

Trump could have been rebuked for his comment that Mexico was sending “murderers” and “rapists” across the border.

Instead, Trump appeared sober and responsible next to a current head of state. Although, he didn’t push home his campaign promise that he would build a border wall and force Mexico to pay for it.

Instead, Trump did that when he was back among his supporters in Phoenix.

Some called it diplomacy. Others weren’t quite so generous.

There are an estimated 11 million undocumented migrants in the US.

He believes two million have a criminal past and may be dangerous. So, on day one of his presidency, Trump said they’ll be identified, found and forced to leave the country. This will be done by a new deportation task force.

For the others, there’s no hope of citizenship; no possible legal status in the future, no amnesty. Once the country judges its economic needs, many will have to leave.

There are many who agree with this view. After all, they point out, they broke the law by either entering the country illegally or overstaying their visa.

If they want to come back and live in the US, they’ll have to apply legally and take their chances.

And there will be changes to the legal immigration system.

Applicants will be judged on what they can bring to the country.

There will be an ideological test too. They will be judged on their views towards American values. They’ll be asked about their views on things such as so-called honour killings or radical Islam. Each answer carries the potential of ending a dream.

While this was the most detailed Trump has been on any topic, which is no real surprise given it’s been the centrepiece of his election bid, it did lack detail on crucial issues.

How do you even begin to deport two million people? How does he remove the estimated 9 million others?

How do you pay for the ideological tests for the millions who apply for citizenship each year? Is the test to be standardised and will it even be constitutional?

His speech wasn’t the forum for that sort of detail, but those are the questions that will be asked and have to be answered in the coming days.

Trump won the Republican primary campaign by being strong on immigration. He derided the position of others as “weak”.

He thinks there is a deep-seated anger in the US about immigration and its impact on crime, jobs and the basic fabric of American society.

Trump believes if he can harness that anger, it could win enough support to carry him all the way to the White House.

And, leave the ghost of Barry Goldwater behind in Arizona. 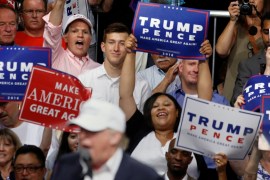 As well as appealing to minority voters, the Republican candidate seems eager to wash off his “racist” label.