Queens, New York – In a quiet neighbourhood with tree-lined streets and rows of neat houses, a community grieves behind closed doors.

Ozone Park hasn’t been the same since August 13, when Maulama Akonjee, 55, and his close friend Thara Uddin, 64, were shot and killed as they walked home after afternoon prayers at the mosque where Akonjee was the imam, Al-Furqan Jame Masjid.

“I’ve been praying behind this imam for three years. He’s very humble and didn’t have problems with anyone,” said Emrul Alam, who is a student and is also working. “Everyone is shocked and disappointed.”

Somir Uddin, 57, no relation to Thara Uddin, said that the mosque used to be full, with around 500 to 700 attending Friday prayers. Now, some have opted to pray at home instead.

“Everyone is scared. The attacker isn’t even from this neighbourhood. We don’t know why he came here.” But Somir Uddin said he won’t be intimidated. “I live near the mosque. I have no choice but to come. I don’t care even if I die. I will come for God,” he said.

The imam’s family remains at a loss over his murder.

“I can’t believe what happened,” said Saif Akonjee, 23. “That my father would be shot like this.” His nephew Asif Mirza, 35, told Al Jazeera: “He believed in peace. He taught his family and all of us to live side by side with all religions and not to judge anyone. This has been shocking for the entire community.”

Maulama Akonjee, the family’s main breadwinner, left a wife, five sons and two daughters behind, with all but one of his children living in New York. One son lives in Bangladesh, the home country of both murdered men.

“My father had big dreams for my youngest brother,” said Akonjee’s 29-year-old daughter, who asked not to be named for security reasons. “He wanted him to become a successful engineer. And now I don’t know if that will happen. I tell my brother that we are here for him. But I can’t believe what happened. My dad took care of us and loved us. What have they done to my father?”

With two young children of her own, she said she is afraid to go out and begins to tremble in fear in the evenings.

“My daughter misses her grandfather and asks about where he is,” she added

Just a few houses down on the same street, the family of Thara Uddin also mourns his loss. Uddin’s brother, Mashuk Uddin, 55, held back tears as he remembered him.

“He always took care of the whole family, but I couldn’t save him,” he said. “Everyone has been telling me what a nice person my brother was. I just want to know what happened. We are looking for justice.”

Police arrested Oscar Morel, a 35-year-old Hispanic man born and raised in Brooklyn, New York, on August 14. He was indicted on Monday and has been charged with two counts of murder and two counts of criminal possession of a weapon.

Some members of the 25,000-strong Bangladeshi community are convinced Morel is guilty of a hate crime – a possibility police are still investigating.

“The men were carrying money when they died, but there was no robbery attempt,” said Khairul Islam Kukon, 34, a community organiser and real estate broker. It was reported at the time of the murders that Akonjee was carrying more than $1,000 in cash, none of which was taken by Morel.

The New York Police Department says there is no reason for them to believe that Morel was hired as a hitman, and that they are not investigating such a claim.

“I blame maniac Trump for the chaos and Islamophobia he has created, for his rhetoric and the way he describes Muslims,” said Kukon, referring to Republican presidential nominee Donald Trump’s controversial statements about Muslims – including the suggestion that they be banned from entering the US and be registered in a database.

Others in the community echo Kukon’s sentiments. “It’s obviously a hate crime. People are convinced by the Trump campaign and what they watch on Fox News,” said local restaurant owner Nurul Haque.

Tensions in a changing community

Bangladeshis started moving to the Ozone Park neighbourhood in the 1980s, preceded by an influx of Latinos the decade before.

But the neighbourhood began as a predominately Italian one, where crime rates have been dropping steadily over the past couple of decades.

“Some Italians stayed because all their roots are here, but many of the children moved away, and the older generation is gradually dying off,” said Joe Puma, an Italian who works for Manhattan Construction.

Puma said that he’s lived his whole life in the neighbourhood and has watched as its demographics have changed. He described how new minority groups began to coexist.

“Everyone gets along. They work together, and they’re learning to live together. It’s a rough neighbourhood. At four o’clock in the morning I’m always looking over my shoulder,” he said in reference to the high number of robberies, “but we’ve never seen anything like what just happened in this area.”

Kukon, too, insisted that his community has no animosity towards their Hispanic neighbours.

“You can’t classify or blame an entire ethnicity for one lone wolf. I have Hispanic friends and I have great relationships with them. I go to their houses and we drink tea together,” he said.

Still, the neighbourhood’s Hispanic community seems to be on edge.

“It’s a shame what happened,” said one young man, standing with a group of other young Puerto Ricans who agreed to talk but declined to be named out of concern over a potential backlash if the killings are proven to be a hate crime.

“No one is singling us out on purpose, but people are on guard now,” said one. “People of all races live here,” added another. “And it’s such a quiet neighbourhood. The loudest sound here is the subway train passing by.”

Puma explained how, when the mosque was first established, some in the community were initially puzzled upon hearing the Muslim call to prayer. “Not in a bad way, it was just unfamiliar to them,” he said. “But for me it was like hearing church bells.”

Back at Thara Uddin’s residence, his son, one of five children, said the family is too scared to leave the house.

Aminur Rashid, 35, the landlord of the two-storey building where the Uddins live, described Thara Uddin as “really nice and peaceful”.

“He had no problems with anyone,” he said. “I used to tell him not to walk alone at night, but he would go to the subway station each day to walk home with this son. He told me not to worry because he didn’t bother anyone.” 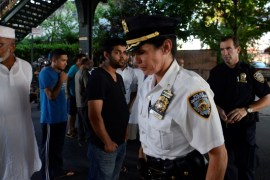 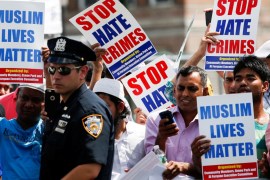