Sydney, Australia – As a single mother, Ash Little had a lot going against her in terms of finding a job.

With no qualification or experience by her side, the 24-year-old is also an Aborigine living in Australia, which made her five times more likely to be unemployed.

But a social enterprise in Sydney helped Little beat the odds when it hired her.

Blak Markets in Bare Island is an indigenous outfit that sells the works of aboriginal artists from across the country, both online and at events.

“I think it would’ve been difficult for me to find employment anywhere else,” Little told Al Jazeera.

Besides capitalising on the lucrative indigenous art market, providing employment to the community’s youth is one of Blak Market’s main priorities.

Teaching young Aborigines about their traditions is another objective.

“I have a passion around trying to do the best for our people,” Peter Cooley, chief executive of Blak Markets, told Al Jazeera.

“We run cultural reconnection camps for older kids where we take them into the on country, into the bush or by the ocean and we teach them how to make artefacts or collect stuff from the ocean and prepare it, cook it on an open fire.”

After two years in operation, the company is able to fund a fifth of its community programmes through its art sale profits.

The enterprise’s aim is to convert that number to a 100 percent and Cooley insists things seem be to looking up for them despite the general downturn in the indigeonous art market.

From initially selling coffee to now in training for event management, Little has come a long way.

“With working with people, I’ve never worked in retail, so I have to deal with customers now so it’s made me a little bit more confident.” 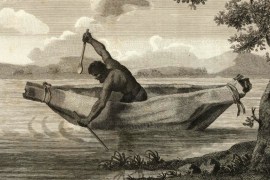 Aboriginal activists call for halt of Sydney light rail extension after discovery of 22,000 artefacts during excavation 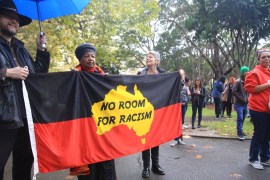 Is it patronising or appropriate of the government to nudge indigenous people out of alcoholism and into jobs?