Lusaka, Zambia – A girl shadow boxes in front of a gigantic gritty mirror, throwing punches at her chipped reflection. Another pair of fighters dance about a dimly lit canvas ring in rounds of a training session with their coach, who yells at them to fight and fight hard if they hope to follow in the footsteps of their role model, Esther Phiri.

As a seven-time welterweight world champion, Esther is Zambia’s most renowned female boxer to date. Since her rise to prominence, as well as changes in sporting regulations, women’s boxing has become increasingly popular in the southern African nation.

Clubs like Exodus International Boxing Promotions (EIBP), have sprung up across the Zambian capital’s poorer neighbourhoods, catering to both male and female fighters.

In Matero alone, a hilly, high-density suburb on the northeastern edges of Lusaka, four barely equipped boxing gyms have opened since 2007. This was when Esther defended the World International Boxing Federation (WIBF) Intercontinental Junior Lightweight title in a memorable home match against Bulgarian boxer, Monika Petrova. Esther, who was rated among the top 10 female boxers at the time by the World Women’s Professional Boxing Federation, won an eight-round match by unanimous decision.

“We don’t just train people to fight, we want them to be classic boxers, once they have mastered the art of classic boxing, they can adopt any other style after that,” Exodus coach, Ariel Banda, explained to Al Jazeera.

In search of glory

But producing a cadre of boxers trained in the archetypal technique used by many legendary fighters is not enough for coach Mwamba; he wants more.

He once made it to the quarter-finals of the 1988 Seoul Games in South Korea, and now Mwamba hopes to produce an Olympic medallist out of the adolescent amateurs he trains.

“Our aim is to train boxers who can bring medals home and get international recognition before they turn professional,” he told Al Jazeera.

Since Esther’s winning streak and the rise of other fighters such as Catherine Phiri (no relation), the first African female boxer to win the World Boxing Council (WBC) bantamweight gold title, the image of boxing in Zambia has been transformed from being a male-dominated sport to one that also appeals to young girls.

Rules and social attitudes towards women’s fighting have begun shifting in the conservative, predominantly Christian nation.

Before 2010, Zambia’s Professional Boxing and Wrestling Control Acts did not permit women to register as fighters, and although female boxers could fight, they could only list as professionals once the law was amended (PDF).

Today, Zambia’s Boxing Federation places special emphasis on recruiting more women for participation in local and regional competitions while home fights on the professional circuit have drawn crowds of spectators and boxing hopefuls.

A means to make a living

The 36 fighters training in the Matero gym are evenly split between boys and girls with at least six fighters selected for Zambia’s under-20 national boxing team. Alice Mbewe, 17, who trains at EIBP and is ranked among the top national fighters in her bantamweight category, told Al Jazeera that the sport was not just a game, but a potential means for survival.

“It’s my dream to go to the university and study mechanical engineer someday, but I really love boxing. With boxing, I know I can win a medal one day, and I can also be a breadwinner who helps the family,” said Alice, who also boxes for the Zambian squad.

Similarly, Violet Phiri (no relation to Esther), 17, who began fighting four months ago, sees boxing as a way out of poverty. After watching her younger brother, Mwengu, 14, retain his unbeaten record after 25 fights and three years of boxing, Violet decided to give it a shot, and she believes being a girl doesn’t hinder her dream of being a boxer like Esther Phiri, her role model.

“I started boxing because my brother always seemed to have so much fun, and my mother always said Mwengu would look after her through his boxing. So, I thought I might be able to do the same if I joined him,” Violet said. “It’s not like in the old days when boxing was a sport for guys only. It’s for us girls too – and one day, I wish to become a champion like Esther Phiri. There’s nothing she can’t do,” she said confidently.

READ MORE: Boxing in Nigeria: A life of hard knocks for the poor

‘A hunger to succeed’

As an affirmation of her faith in Zambia’s women boxers, Violet says she’s excited for the big fight on August 27, when Catherine Phiri will defend her WBC title for the first time against Gabisile Tshabalala of South Africa.

Barbara Banda (no relation), another emerging boxer who also captains Zambia’s under-20 national football team, will also fight at the much-anticipated contest. Coach Ariel Banda expects the championship will bring more young girls to the gym.

“After a big match, we always get so many young girls who come and sign up saying they want to box. These big matches create so much excitement, and it’s great for the community, but out of the many who come, only four out of every 10 will last through our training, and even less will go on to become real boxers,” he told Al Jazeera. “It’s not easy.”

But for those who do make it, Evan Banda (no relation), the director of Africa Directions, a community-led NGO in Mtendere, a poor but bustling neighbourhood in eastern Lusaka where Esther Phiri first trained, believes the success of Zambia’s boxing women is not only due to their athletic ability, but the opportunities offered to them.

“Growing up in a neighbourhood where you have to fight for everything means your situation is different from those who have everything. There is a hunger to succeed and because it seems as though there’s no other window of opportunity in life, these kids will grab at whatever’s available just to make it,” said Evan.

As more of Zambia’s young women enter the ring, defying the constraints of poverty and patriarchy, they hope to take a shot at a better and brighter future. 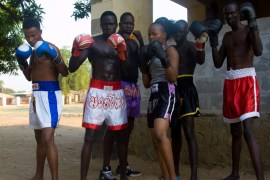 A kickboxing gym in South Sudan strives to overcome tribal divisions in a country wracked by civil war. 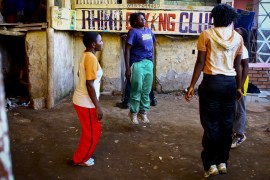 Meet the female boxers fighting for their future in a Kampala slum.