Cape Town, South Africa – At the bottom end of the suburb of Woodstock, near the old market and the train tracks, is Bromwell Street. The street is an incongruous mix of crumbling Victorian-era bungalows, dilapidated red-brick factory buildings with shattered windows and newly renovated apartment blocks. Bromwell’s historically close-knit, racially-mixed working-class community may be the latest casualty of Cape Town’s urban regeneration programme (PDF).

Graham Beukes, 35, has lived in the same small house on Bromwell Street since he was born. His parents lived there for 50 years.

Beukes and his family are among the 28 tenants due to be evicted from their homes in August to make way for a new development by the Woodstock Hub, a private investment group that bought the property two years ago. The Woodstock Hub has purchased a number of other buildings in the area and says that it intends to “redevelop both residential, commercial and mixed-use properties”.

The Woodstock Hub claims that Beukes and the other Bromwell Street tenants are being evicted for failure to pay rent. But while tenants concede that they have not been paying rent for the past two years, they say that they have been unable to establish any contact with the new owners since they took over the property. Residents believe that this has been part of a deliberate move to facilitate their eviction and avoid dealing with long-standing lease agreements.

“This gentrification thing, it could be a good thing because it creates jobs for people, but people are losing their houses. And these developers, they don’t care about the people that have been living so many years here,” Beukes told Al Jazeera.

Just a couple of blocks away on Alfred Street in the neighbouring suburb of Salt River is Nooran Dreyer, 42, who faces eviction in November to make way for a new dental practice. Dreyer says she has “almost given up hope” of being able to stay in her home of 11 years.

The outer walls and corrugated iron eaves of Dreyer’s single-storey apartment building have already received a new lick of grey paint as a first step in the proposed facelift. A Congolese-owned shop that sold cassava, plantains, salted fish and cigarettes on the corner of the property recently had to close its doors for good. A handwritten sign declaring “No urban regeneration without us” hangs from a lamp post in front of the building.

A continuation of colonial relationships

Bevil Lucas is a member of a Cape Town social movement called the Housing Assembly and helps provide support and legal advice to potential evictees. He is a long-time resident of Salt River, an encyclopaedia of local history and a former anti-apartheid activist.

He points out that much of this former industrial area escaped the large-scale segregation of the apartheid state’s Group Areas Act, which ripped apart other similarly diverse Cape Town communities, most famously District 6.

The Act saw most Capetonians of colour cast out into the collection of marginalised townships now known as the Cape Flats and sometimes still referred to as the “apartheid’s dumping ground”.

Lucas says that the current gentrification of Salt River and neighbouring Woodstock, and the eviction of poor black and mixed-race residents, is a continuation of apartheid and the preceding colonial relationships that stretch all the way back to the late 17th century, when slaves were still sold in this area.

Most of these slaves came to the Cape from Asia and had brought with them a strong Islamic influence that is still present today. As Lucas speaks, a muezzin issues the call to evening prayer at a nearby mosque.

“I used to know all my neighbours here, but now I know just a few of them,” says Lucas, himself a Muslim descendant of slaves.

“There are more high walls going up, more electric fences going up. Fewer children are playing in the street. These new developments, they are changing the kind of residents that can live here and the cultural and social being of the area.”

Land for people, not for profit

Twenty-two years since the end of apartheid, this situation is being mirrored across Cape Town, with free market forces, favourable tax breaks and rocketing property prices entrenching Cape Town’s undesirable status as one of the most segregated cities in South Africa.

But a new campaign dubbed Reclaim the City aims to finally wrest Cape Town’s soul from apartheid’s enduring legacies and what activists see as its contemporary manifestation. Marching under the banner of “Land for people, not for profit”, the campaign is fighting to reimagine the city as a more racially and economically integrated and equal space.

At present, Reclaim the City and Ndifuna Ukwazi’s primary battlegrounds are four key state-owned parcels of land around the city centre, which the Western Cape Provincial Government intends to sell off for lucrative property developments, but which the activists believe would be prime locations for affordable housing for the poor.

“We started noticing that the city centre was developing phenomenally fast, with major high rises, hotels, luxury apartments and so on, and increasingly, state land was being sold off for it to do so,” says Achmat.

“Meanwhile, our city has not been desegregated. People travel hours to get into the city, and hours [to get] back home, and they can spend more than 50 percent of their income just on transport.”

“And at the same time, young professionals increasingly cannot afford to live in the city any longer,” says Achmat. “So not only do you increasingly have the entrenched racial segregation, but increasingly poorer and lower-middle-class white people being forced out of the city, too. So clearly there’s a problem.”

Reclaim the City has quickly gathered considerable support across Cape Town, its suburbs and its sprawling townships. “For the first time in a hell of a long time in Cape Town, you’ve had people from all classes, all races, all nationalities come together and say this is wrong,” Achmat told Al Jazeera.

After months of dogged campaigning, Reclaim the City and Ndifuna Ukwazi recently succeeded in temporarily halting the sale of Tafelberg, one of the four state-owned land parcels and a former remedial school, located in the fashionable and increasingly affluent seaside neighbourhood of Sea Point.

On July 29, Western Cape Premier Helen Zille agreed to conduct a feasibility study on the possible introduction of affordable housing to the Tafelberg site.

The Department of Transport and Public Works had received more than 8,000 comments concerning the proposed sale and 937 written objections from religious leaders, ratepayers, urban planners, academics, rights organisations and residents.

Transport department spokesman Byron La Hoe said that the newly-proposed Tafelberg model “is aimed at equipping cabinet to make an informed decision about the comments received”.

“We look forward to testing the viability of social housing on the Tafelberg properties based on sound financial modelling,” added Zille.

Malcolm McCarthy, the general manager of the National Association of Social Housing Organisations, says the move is a “very positive outcome”.

Reclaim the City says that the Tafelberg site could sustain up to 341 affordable housing units, and in doing so, would set a precedent for reversing the apartheid spatial planning that currently continues to reserve areas like Sea Point for predominantly wealthy white residents.

Elizabeth Gqoboka, a spokeswoman for Reclaim the City, has lived and worked in Sea Point for 22 years as a domestic worker and carer.

“Mostly, people here make you feel that only the rich are supposed to live in Sea Point,” Gqoboka says.

“But it’s not the rich who have made Sea Point what it is today. We working-class black people have been contributing to this area for so long. So how can we still be excluded in this new South Africa they talk about?”

Although the Reclaim the City campaign keeps gathering momentum, no social housing developments have been built in Cape Town’s Central Business District since 1994.

The local government continues to address what it has conceded is a ballooning housing crisis by building so-called Reconstruction and Development houses and Temporary Relocation Areas far from the city.

But according to Reclaim the City, the geographic distance of these developments dramatically restricts residents’ access to economic opportunity, education, good public services, safety and dignity.

Nowhere is this assertion better illustrated than in the sand-swept, destitute, corrugated iron settlement of the Symphony Way Temporary Relocation Area, which locals refer to by the more appropriate moniker of Blikkiesdorp, or “Tin Can Town” in English.

Alvin Johnson has lived in Blikkiesdorp for eight years after he and numerous others were evicted from Gympie Street, in Woodstock, in the run-up to the 2010 FIFA World Cup. Gympie was once one of Cape Town’s most notorious crime hotspots, but most of the street has now been renovated and its narrow, double-storey terraced houses were painted in pastel colours.

“Life here is very tough,” he says. “There is nothing here. Most people must resort to crime to support their families. There’s a lot of gangsterism, kids dropping out of school. The government told us it’s temporary. But eight years isn’t temporary.”

About 30km north of Cape Town, on an isolated and barren patch of farmland, is Wolwerivier, a new so-called incremental development area of roughly 500 corrugated shacks that bears a striking resemblance to Blikkiesdorp.

In 2015, Councillor Benedicta van Minnen, the City of Cape Town’s Mayoral Committee Member for Human Settlements, said that “the broader site of Wolwerivier is currently in the planning stages for mixed residential use and business development to take place. It will be increasingly well-located as development takes place in the growth corridor”.

WATCH: South Africa – Are students the key to real change?

However, Wolwerivier residents interviewed by Al Jazeera repeatedly referred to the settlement as a “dump site” for the poor.

Ndifuna Ukwazi’s Achmat maintains that the local government and municipality’s focus on developing outlying areas such as Wolwerivier to combat the city’s housing crisis is “economically, environmentally and socially unsustainable”.

He reaffirms that building affordable housing on sites such as Tafelberg in and around the city centre is not only a more sustainable long-term option, but a necessary step in healing the enduring wounds of apartheid in Cape Town.

“So many people’s imagination has been crushed to believe that they can only live in a ghetto,” he says. “What we need most of all is to create a new imagination of our city.” 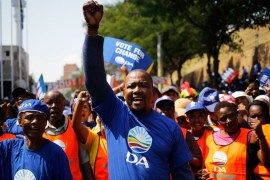 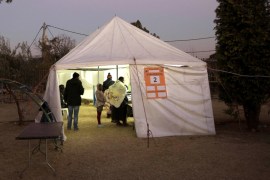