“I think it’s time that Democratic candidates – Hillary, Bernie or anybody else – start taking the issue seriously and start a real national conversation and get behind all human rights, including Palestinian rights,” said Putzova, a city council member from Flagstaff, Arizona.

She was among many pro-Palestine activists at the DNC this week who came out in a show of force unprecedented at other political conventions. They marched and rallied, held talks and town halls, carried signs and, at one point, raised a Palestinian flag on the convention floor.

“The issue is getting more media exposure, more people are aware,” Putzova said. “I think we are on the brink of changing the policy stands of the US, but it will take all of us to push the political elite. I think [Palestinians are] a community that has been marginalised for so long.”

An issue that was once sidelined even in progressive circles, Palestine was pushed to the forefront of the electoral campaign this year, with Vermont Senator Bernie Sanders showing that policy change on a seemingly intractable conflict is possible.

In a debate last April, he pushed Democratic presidential nominee Hillary Clinton to call the 2014 Israeli war on Gaza “disproportionate”. He said the US and Israel need “to treat the Palestinian people with respect and dignity” and that the US “has to play an even-handed role”. Sanders, however, was also criticised for not denouncing Israel more forcefully, and for the ousting of his campaign’s Jewish outreach director, who slammed Israel’s prime minister in a Facebook post.

A month later, Sanders assigned James Zogby, an advocate for Palestinian rights, and four others, including one of two Muslim congressmen, to the platform-writing committee, signalling his attempt to revise the party’s long-standing policy that favoured Israel.

“It took the work of a mass movement and a courageous person like Bernie Sanders, because if Bernie hadn’t elevated it, it wouldn’t have happened,” said Zogby, also President of the Arab American Institute, in a talk attended by pro-Palestine supporters in Philadelphia. “He gave us a qualitative boost forward.”

READ MORE: Muslims at the DNC – Taking a stand against Islamophobia

What’s on the platform?

On the DNC sidelines, pro-Palestine supporters discussed how the conflict with the Israelis was playing out on the domestic policy platform.

But in stark contrast to public support and activism, the party’s platform, which now supports a $15 minimum wage and Wall Street reform, did not include references to the Israeli occupation and its settlements.

Zogby said Clinton supporters cut out these references, fearing retribution from billionaire mogul and Republican donor Sheldon Adelson.  On an official level, Clinton’s backers said the call for negotiations for a two-state solution in the party’s platform was sufficient.

Going into the platform-writing committee, Zogby said he and other Sanders delegates were expecting to discuss removing a reference to Jerusalem being the “undivided capital” of Israel, and opposition to the Boycott, Divestment and Sanctions (BDS) movement.

“We wanted to strike the BDS line, we wanted to strike out a line on Jerusalem,” said Zogby, who is also on the DNC’s executive committee. “I thought that would be the fight. I had no idea the fight would end up being over occupation and settlements.”

They lost on all counts, and pro-Clinton supporters said they couldn’t change the language. “Here’s what they told me: ‘We can’t do it because Adelson will come out against us,'” Zogby said. “He will come after you no matter what you do. The people who like [Adelson] won’t vote for you.”

READ MORE: Who is Sheldon Adelson and can he sway the US election?

The platform committee discussions leading up to the DNC also spurred controversy, as civil rights activist and scholar Cornel West made an impassioned appeal to change the language to include “an end to occupation and illegal settlements”.

He called Palestine a “Vietnam War” issue for young Americans, and likened the party’s indifference to the conflict to the same apathy to “these Negroes” in the Jim Crow era.

Despite the fact that the resolution was voted down, some believe that the discourse on Palestine has shifted.

For the first time, the platform reflected the right of Palestinians to “independence, sovereignty, and dignity” in addition to Israel’s security. In a recent poll (PDF) of American attitudes on the conflict, 49 percent of Democrats said they recommended economic sanctions or other more serious action to counter settlement construction.

“The conversation has improved a lot … it is broader and more inclusive,” said Congressman Keith Ellison of Minnesota, another Sanders pick on the DNC platform committee. “Over the past few years, members of Congress have gone to the Holy Land, not only to Israel, but also to Palestine. The perspective is changing, and it’s a good time to continue the work that you’re doing.”

Palestine supporters are banking on the presence of many activists and progressives in the city, in part because of Sanders’ candidacy, to expand and change the debate on the conflict.

They are also aware that the share of younger Americans sympathising with the Palestinian cause has risen significantly in recent years – from 9 percent in 2006 to 20 percent in July 2014, and finally to 27 percent today.

“We have seen some fairly remarkable changes in the landscape of how the issue of Palestine and Israel is being addressed – both in the news media and particularly within progressive circles,” said Mike Merryman Lotze, the American Friends Service Committee’s (also known as the Quakers) Palestine-Israel programme director.

“If we look back where the conversation was 15 years ago today, even really five years ago, we have to recognise that we are now in a fundamentally different place,” he said.

“That marks a shift … and that conversation has been pushed by the grassroots progressive movement.”

READ MORE: US Democratic Party – Closer to justice on Palestine? 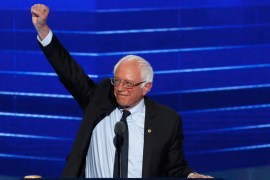 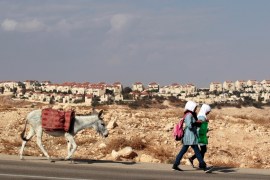